VIN AT ALL COSTS 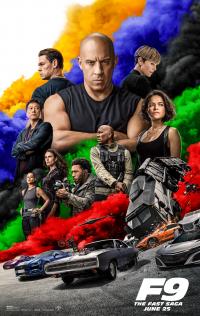 Is there any point in bothering to review a film like Fast & Furious 9? Its very existence is a middle finger to anyone who genuinely considers themselves to be a 'film critic' - even its title feels like the sort of cute background gag you'd see in Back To The Future II, a sly crack at Hollywood's over-reliance on familiar formula. Let me rephrase my original question: is there any point in me bothering to review a film like Fast & Furious 9? The answer is yes, thank you very much, because I haven't reviewed a film since 2019 and I couldn't imagine booking an easier comeback gig. It's a big stupid target for someone like me to take cheap potshots at and at the same time feel good about myself for ultimately giving it a positive review, as per the will of the people. Everybody wins! Except the criminals.


Straight off the bat, you know it's getting a pass: Fast & Furious 9 is big on action, proudly lowbrow and doesn't star James Corden. Tick, tick, tick! It's the very definition of brainless entertainment and it has been clinically engineered that way by bro scientists wearing Crocs and Fred Perry lab coats open to the waist. If all you want from your blockbuster entertainment is car crashes and smashy smashy egg man action, then boy do I have the ninth instalment of a thing for you. Just don't blame me if the short-term thrills it provides don't provide lasting happiness: Fast & Furious is Hollywood's foremost franchise fuckboi, a guaranteed good time that makes an immediate impact with chiselled good looks and relentless thrusting piston action but has literally never read a book in its life.

Twenty years have passed since the original movie, The Fast and the Furious, was released. The franchise has come a long way in those two decades: it started with a group of hunky young thugs knocking off a truck of combi-TV-DVD players, and its most recent iteration ended with an exploding nuclear submarine in the Antarctic. Do not, however, mistake spectacle for progress. There have been twists and turns and alliances and resurrections and intersecting timelines, but be under no illusion - the Fast & Furious franchise is as on rails as they come, essentially a narrative Scalextric. There's a moment during an early flashback - arguably the only new plot element to be introduced - in which a character tells a young Dom Toretto: "You and me, we're stuck going round in shitty little circles over and over." It's intended to be a NASCAR analogy, but it's actually a pretty good summation of the series' inherent limitations. 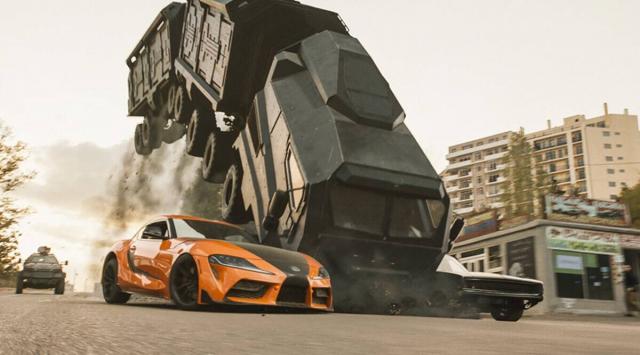 
The question I am posing is this: should we demand more from a movie like Fast & Furious 9? How many more free passes does this franchise get? The action is still eye-popping and loud and expensive, a right old destruction derby for the senses, but is there honestly a single set-piece here that compares with anything in Mad Max: Fury Road? If I may be so bold as to use a driving metaphor, becoming the first Fast & Furious reviewer ever to do so, the plotting still feels stuck in first gear. Does every movie in this franchise have to feature a techno-macguffin global catastrophe as its endgame? I feel like the last three Fast & Furious movies used that exact plot device. Forgive me for the sin I am about to utter, but: do cars absolutely have to be involved in every big action sequence? Would there really be that much of an uproar if the franchise moved past 'four wheels good, two legs bad' as its motto? Fast & Furious has built up an entire gas tank of goodwill over the last two decades, so you would forgive it for taking a few risks. It feels weird to say that about a movie that literally blasts two of its characters into space, but ambition is relative I guess.

Fast & Furious 9 confuses incident with development. It has big madlib energy, like the writers just threw as much weird shit at the wall to see what would stick. Tonally it's a lucky dip, swerving recklessly from 'Helen Mirren diamond heist' to 'Cardi B cameo' by way of 'tearful family flashback' and 'magnet plane'. Vin Diesel, franchise MVP and sentient slab of Wagyu beef, just about holds it all together with his trademark stoicness, alternating moods between 'cuddly teddy bear' and 'death stare', representing both ends of the Paddington spectrum. And then there's Charlize Theron, hiding behind her second shit haircut of the franchise - a Gareth Keenan-esque undercut that could only be an attempt to hide her identity to prevent her fellow Oscar-winners from finding out how she pays her mortgage - trapped in a perspex box with only her lookatmyfuckingredtrousers.blogspot.com fashion sense to keep her amused. There's plenty going on - occasionally more than one thing happening per scene! - it's just really bloody weird. 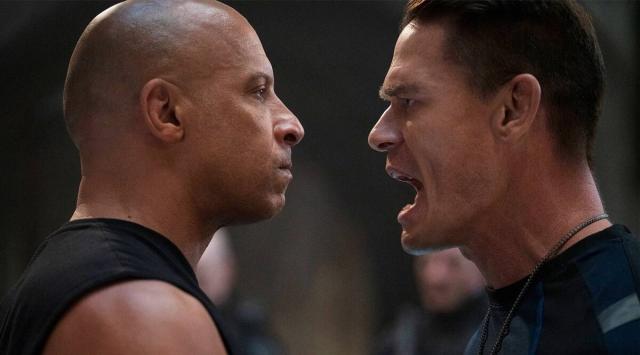 
The big draws here are the dramatic return of Sung Kang's character Han and the introduction of John Cena as Dom's Brother Who He Conveniently Never Mentioned In Parts 1-8 Despite Banging On About Family Every Other Fucking Minute. Han made his debut in the third movie, died at the end, returned for parts 4-6 in some timeline trickery, then died for real again in Furious 7, only he didn't die because he was revealed in the first F9 trailer back in January 2020, so: surpriiise! Once Han spills the beans on how he improbably escaped certain death, the movie struggles to do anything with him to justify bringing him back. The same rule applies here as it does in any franchise: every time a character is brought back from the dead, the stakes, the threat and the returns all noticeably diminish.

Fast & Furious 9 doesn't even bother stringing out the 'OMG he's definitely dead!!!' scenes for longer than a few minutes: it's twice guilty of showing characters appear to die fiery deaths and/or suffer fatal blunt force trauma before a snap-cut reveals they escaped unscathed. I know this franchise is for people with short attention spans, but at least put on a show, guys! Tyrese's character Roman, veteran of six Fast movies, even suggests he might be an unkillable god, and instead of exploiting his claims for comedic purposes, the movie actually goes out of its way to underscore his point, effectively turning his hypothesis into fact. All I'm saying is they could have shot him and it would have been hilarious. Alas.

Cena's addition really only highlights the bloodless WWF-esque kayfabe of the fight scenes - this is a franchise crying out for a 15 certificate. I find it hard to believe there's a constant army of perennial 12-year-olds that wield all the power in Hollywood. Okay, so it's not exactly mature of me to want my action heroes bleed and say words like "motherfucker" or scream "I will SKULL-FUCK YOU LIKE A LITTLE BITCH BOY", but these are my demands. It feels weird to think we collectively willed a movie like Die Hard 4.0 to tank because a PG-13 John McClane killed a helicopter with a car and walked away, but that's just a slow Tuesday for Vin Diesel. Those 20 years in the game are catching up with the cast: Diesel is now 53, his face bearing more than a few fury lines, and Natalie Emmanuel is the only member of the principal cast that is not over 40. If the franchise keeps going through the motions on cruise control, the wheels of Fast & Furious are in danger of becoming square. 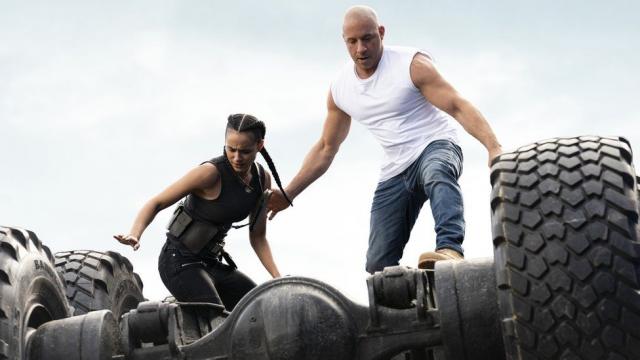 "How do you do, fellow car surfer? My knees do not hurt at all"


Mercifully, Fast & Furious movies always present plenty of opportunity to make your own fun. I would suggest a drinking game in which you take a shot every time someone says the word "family" - you'll be paralytic by the end of Act I and will need an intervention by the end credits. F9 does actually walk the walk in this respect, bending over backwards and crossing international borders to bring fan-favourite characters back into the fold. It's odd that Diesel is so against the idea of Fast & Furious spin-offs, because really, in terms of sorting his 'familia' out with biennial paycheques, the whole operation here isn't that much more sophisticated than Adam Sandler & Friends' Big Holiday Scam. The continued and respectful treatment of Paul Walker's character Brian - the franchise's Mrs Columbo, now eternally off-screen but never far from characters' thoughts - is at least a reminder that the franchise's idea of family extends beyond the edge of the frame.

Right. I think that's me got everything out of my system. Bit of a bark at the moon, this one - a total howl into the void for all the good it'll do. There exists zero people in this world who will read a less-than-glowing review of a Fast & Furious movie and think 'Hmm, maybe I should go and see Minari instead'. You'll go see it at the cinema, you'll love it, you'll forget who's supposed to be dead and why, and you'll probably go and see Fast & Furious 10 and Fast & Furious 11: Fastest and Furiousest, too. Everybody wins, I guess.

Additional observations
- Update on whether any Fast & Furious characters have fucked a car yet: no Fast & Furious characters have fucked a car yet.
- Kurt Russell's contributions are limited to one obvious Zoom contribution and a single scene shot in person. His character is missing as part of a central mystery that no one ever bothers to solve. Maybe they should try looking in 'Undisclosed Location'.
- I have always liked the globe-trotting nature of the Fast & Furious films and the variance in colour, style and culture they bring. Far-flung locations included this time round include, um, Edinburgh and, err, Tblisi, two extremely grey and flat concrete cities that I can only assume offered excellent tax incentives.
- In Fast & Furious 9, the absent Brian is mentioned to be on childcare duty while wife Mia (Jordana Brewster) takes on the bad guys in various death-defying missions; I chuckled imagining him patiently listening to his wife detail the dozen different ways in which she almost died, waiting for his turn to list the various hardships he'd endured while babysitting.

More:  Fast Furious 9  F9 The Fast Saga  Fast Furious  Fast And Furious  Vin Diesel  Charlize Theron  Cars
Follow us on Twitter @The_Shiznit for more fun features, film reviews and occasional commentary on what the best type of crisps are.
We are using Patreon to cover our hosting fees. So please consider chucking a few digital pennies our way by clicking on this link. Thanks!