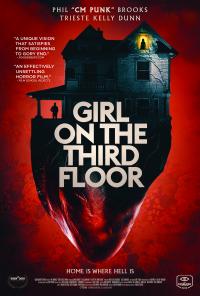 I'm glad this film came to Netflix because it's given me a chance to talk about one of my obsessions: house sizes in American horror movies. They're so huge! Are all houses over there that big? They all seem to have a basement that goes on forever, and a loft you can stand up in with floorboards and windows. I mean they're perfect for horror - lots of spooky corners for ghosts to jump out of. Here in the UK our houses are tiny and the walls are thin; if you so much as put your cup of tea down too loudly you can hear the people next door tut. So why are American houses so big? Is this what happens when you get to choose between having a larger house or living with a debilitating illness?


If I've learnt anything from Travis Stevens' Girl on the Third Floor it's to never have sex with a ghost. Nothing good can come of it, especially if you've got a pregnant wife and think you can force the ghost to stay silent. The spectral shagger in question is Don Koch (CM Punk, who I think is like an anti-JR Hartley?), an ex-alcoholic ex-lawyer renovating a large house in a small town far away from the temptations of the city. Buuuut the house has a history, having operated as a brothel in years gone by, and the former residents have come back to take revenge on any men - specifically shitty men - who should darken their doorway.

Don is one such extremely shitty man, downing tools and pants the first chance he gets when the sultry Sarah (Sarah Brooks) appears in his back yard, offering to polish his hard hat and hammer his, uh, balls. If Don had spent more time watching horror films than chasing women he'd know that something is off about Sarah - her retro clothing, intimate knowledge of the house's history, ability to appear and disappear at will. "Last night was fun" says Don, unaware Sarah is an everlasting imprint of ironic reckoning in the form of a spooky honey trap, and he's just fallen in dick-first. 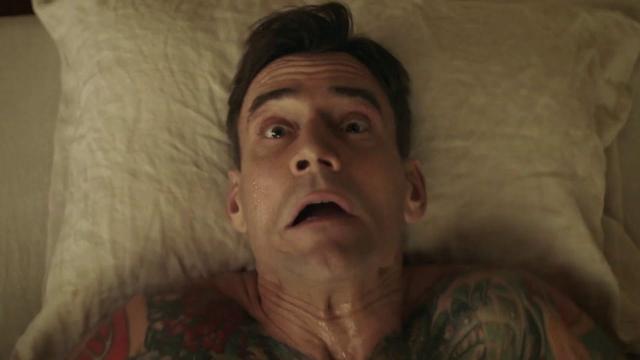 Actual photo of Don realising the error of his ways


As you can imagine things don't go well for Don, but he deserves whatever he gets in Stevens' takedown of the historically violent patriarchal treatment of women. It's when wife Liz (Trieste Kelly Dunn) turns up that things become interesting, as she tries to figure out where her husband has disappeared to, and whether the large holes in the house walls are part of Don's redecoration plans. But no - Stevens' has blueprinted a nightmare interior for the occupants that not even Handy Andy could fix, with all manner of secretions oozing from the walls. It's more goopy than Gwyneth Paltrow with a mouthful of Quaker Oats.

Some impressively gross practical effects aside, Girl on the Third Floor holds proceedings together well for the majority, only starting to falter towards the end when the weight of too many elements begins to take its toll. Things in walls, things coming out of walls, time slips, a thing with a dog, revenge plots - even some spooky ball rolling occurs. You can only really get away with balancing that much stuff if you're a Kubrick or a Flanagan. Anything else is imitation, although in Stevens' debut effort it appears sincere, rather than obnoxious as can often be the case. 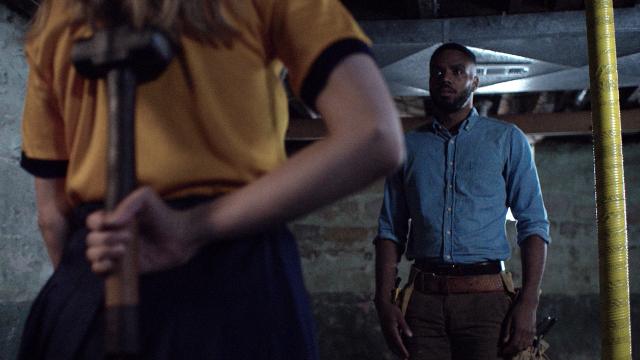 Something tells me this situation is not on 'the level'


If you're looking for a Friday night film that isn't too long or demanding or depressing, then you could do much worse than Girl on the Third Floor. The central message about a strong woman taking care of business while a weak-willed man succumbs to his desires could easily have been too preachy - and we could have done with more from Liz's perspective earlier on instead of spending so long with Don, who we understand pretty clearly from the start is a scumbag - but Stevens has done a competent job while paying his homages.

And all these spooky shenanigans take place in one huge house. Seriously, its massive. Can you imagine the same story set on an English housing estate? Wouldn't happen - the neighbours would be banging on the walls. The ghost would get an ASBO. Or maybe it got given an ASBO unfairly and that's why it's mad? And the house was built on the site of an abandoned recreation centre. The ghost could leave those little silver cannisters everywhere. Wait, this could work. Someone get me Spielberg's phone number.

More:  CM Punk  Trieste Kelly Dunn  Sarah Brooks  Karen Woditsch  Travis Delgado  Travis Stevens  Netflix
Follow us on Twitter @The_Shiznit for more fun features, film reviews and occasional commentary on what the best type of crisps are.
We are using Patreon to cover our hosting fees. So please consider chucking a few digital pennies our way by clicking on this link. Thanks!