Review: Green Book is a road trip that takes Route 1 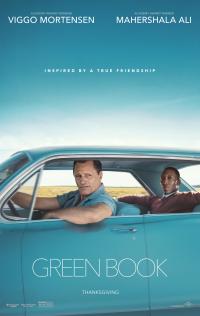 If racism can be solved in microcosm, film often likes to suggest, then can't we all just get along? Sure, except for all the massive systemic obstacles to that. The buddy relationship at the heart of Peter Farrelly's Green Book, one in which a white racist comes to accept a black man as a friend, wants us to believe that prejudice can be chipped away at through prolonged exposure to its object; that we only hate what we don't know. There's probably a broad truth in that. And yet social media has introduced everyone to people and cultures they'd otherwise never interact with, and Twitter in particular seems to make people even more determined never to change their mind. So is this any use?


Green Book is sold to you as a Serious Film About Race. And much like Hidden Figures, it is a lot more frothy and superficial than it promises. This isn't to say it has no value, because there's room for light-touch commentary as well as earnest examination, but given its signifiers – release around awards season, double heavyweight male leads tailor-made for dual acting Oscar nominations – you expect it to be something it isn't.

What it is, really, is a light comedy of manners in which its two leads both have initial character flaws and overcome them as you know from the outset they will, the lead female character stays at home by the phone, and the life lessons learned rely on a shaky ethical compass that the lead hasn't discarded by the end, just adjusted a little bit. And so when you think back to how despicable he was at the start, you're not all that satisfied in liking him at the end.

A scene at the beginning makes clear how deep the film's going to have to dig to make you sympathise with Viggo Mortensen's Tony: he throws a glass into his kitchen bin because a black man drank out of it. A road trip and a few scrapes later, he seems over this. Later his natural sense of sympathy for the downtrodden is probably what kicks in when his employer Don Shirley is refused entry to a restaurant on account of his skin colour; perhaps he feels uncomfortable eating in nice places too because he thinks he's sneered at, and it makes him think this an equivalence. And yet by the end he hasn't discarded prejudice entirely; just accepted blackness (or more specifically, one man's blackness) as something he's happy enough to overlook. Like a football fan shouting racial abuse at the opposition's black players but leaving his own team's alone. 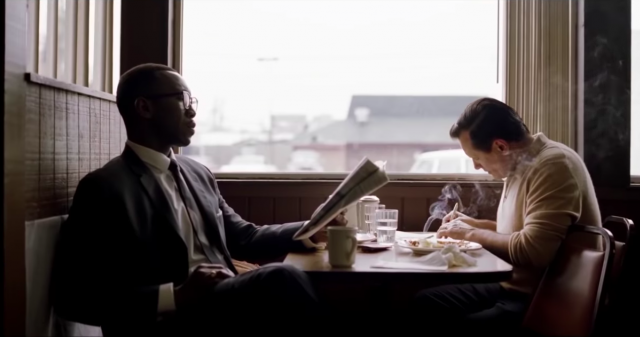 "Seen this thing Liam Neeson's said in the paper?"
"What, the thing about the horse?"
"Nope."


There's a problem with this dual character growth, too: it equates Don Shirley's slight priggishness with Tony's avowed racism, and suggests that they've both by the end addressed these flaws by exposure to each other. Yes, Shirley could probably stand to have less of a stick up his bum about everything, but using the buddy road trip structure means your premise is that these two have helped each other to grow somehow, and so maybe that their shortcomings were more or less equal, given that they've been solved by the same means. I'd argue that being a massive racist is a more significant character defect than being a bit picky about getting crumbs on the carpet.

Shirley's own journey to let go of his stiffness is also drizzled with a slightly icky sense that he must somehow learn to be "blacker"; that dressing smartly, primness and good manners aren't "naturally black" traits which he must therefore come to shed. The idea that it is a reasonable choice for him to play classical piano is also challenged, in a late scene in which we're led to believe the real Shirley comes out through playing in a juke joint.

Some films are enough on the performances alone, and Green Book more or less scrapes by on that score, because both Viggo and Mahershala Ali are terrific in it, if the former a bit too caricatured. It's very funny too. I might be guilty of assuming "worthy" films won't be sentimental, which is a stupid idea to get into your head, when they can of course quite reasonably be both. But Green Book was a lot more sentimental (like, a climax set at Christmas for no narrative reason), and in general a lot more route-one than I expected.

More:  Green Book  Peter Farrelly  Viggo Mortensen  Mahershala Ali  Linda Cardellini
Follow us on Twitter @The_Shiznit for more fun features, film reviews and occasional commentary on what the best type of crisps are.
We are using Patreon to cover our hosting fees. So please consider chucking a few digital pennies our way by clicking on this link. Thanks!