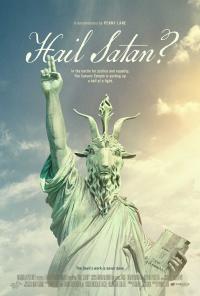 I'm still not sure the subjects of Penny Lane's documentary Hail Satan? are taking themselves entirely seriously. But then again they've got nothing to lose, and everything to gain as they take their cause - recognition of The Satanic Temple as a valid religious entity - up against a system of governance entrenched with Christianity in America. Let's see how that goes shall we.


The Satanists of The Satanic Temple probably aren't what you think they are. They don't worship Satan for a start. Well actually they do, but not as the arch nemesis of God and Jesus and all that sort of thing - you want The Church of Satan for that - and not in a troublesome, law-breaking way, although the organisation does attract its fair share of fringe members. Followers of the Temple claim to be Satanists in the literal way that the word 'satan' simply means to be an adversary - a view of course rejected by many Christians, who see the group as a desecration of everything they hold dear.

By any measure of rational logic it's an infallible point of view: the man-made God of Christianity is no more legitimate as a figure of worship than any other deity we can dream up. Which would be the end of it, except Christianity is the default setting in America, and they're not the most forgiving of people. Therefore The Satanic Temple approaches their inevitable battles in front of judges, media and angry God-fearing Christians with a smile, presenting their arguments - beliefs, if you will - with a satirical, button-pushing bent.

Although tbf it definitely does look like they're taking the piss


The face of the Temple is Lucien Greaves, a sort of Poundland Elon Musk built for reasonable debate. That's not to belittle Greaves' arguing skills - his calm manner and preparedness for any legal/moral/theological challenge is unquestionable. But to his frustration he lacks the means to make a real go of it, and subsequently the Temple finds itself unable to gain a foothold in areas where more well-funded groups are already established. His solution: crowdfunding. But what are they going to crowdfund? Marketing drives? Lawyers to take on the big guys? A bus to drive around with controversial statements written on the side?

No - a big ol' statue of horned occult symbol Baphomet surrounded by adoring children, to hopefully be erected outside a courthouse in an expression of religious freedom. They're really not helping themselves. Thus we have a fittingly ridiculous encapsulation of the problems faced, and posed, by The Satanic Temple. To go halfway with one of these ploys would open them up to ridicule, so the only option is to fully commit to brazen acts of carefully-planned, satirically-safe heresy to score their points, which usually invites bad press anyway. They're literally damned if they do and damned if they don't.

Lane was granted access to The Temple's inner workings for several years, during which time she covered hearings related to the statue, and gained insight into some of the more provocative events designed to attract attention - events such as a 'Pink Mass' held over the grave of Catherine Johnston, mother of Fred 'Westboro Baptist Church' Phelps, to convert her into a lesbian in the afterlife. If the Temple believe it to be true then it is if you are a believer in the Temple, so goes faith logic. If a bit of secondhand believing should float over to you then, well, that's just how holy spirits roll. It's deliberately inflammatory, but then so is Westboro's picketing of funerals and abortion clinics. Extreme beget extreme. 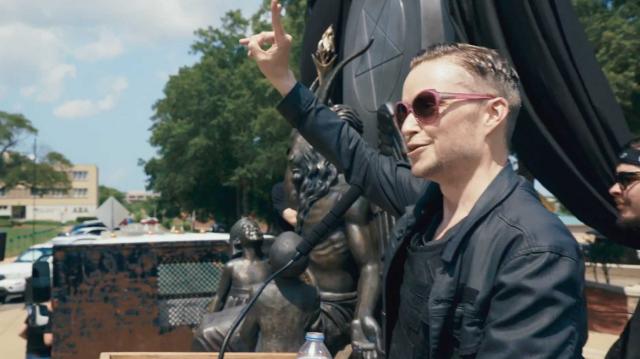 
For all Greaves' transparency about the Temple's goals, and candid talking heads with members from all walks of life, they're only going to make progress if non-members acknowledge the group have a point and engage with them. With that in mind your receptiveness to Hail Satan? as a Christian/Muslim/atheist/Pastafarian is probably determined already to some extent. Lane is known for oddball documentaries so you'd think she would be predisposed to the Temple's ways, but she does a fair job of showing them warts-and-all. We get a picture of a group that is part-circus, part-faith, part-political, and part-chaos; as appealing as it is grotesque, as kooky as it is serious. In other words a fitting representation of modern life. No wonder people cling on to the old ways.

More:  Penny Lane  Lucien Greaves  Satan  Documentaries  Netflix
Follow us on Twitter @The_Shiznit for more fun features, film reviews and occasional commentary on what the best type of crisps are.
We are using Patreon to cover our hosting fees. So please consider chucking a few digital pennies our way by clicking on this link. Thanks!