YOU'RE A BIG MAN BUT YOU'RE IN BAD SHAPE

Review: Halloween is hollow and joyless, like a sad old pumpkin left out to rot

I've always thought of slasher franchises like DIY chemistry sets. Once your hypothesis has been proven - that's your murderer, your motive and your gimmick - subsequent tests should be relatively simple to assemble: all of your elements are still available for use and you're aiming for the same reactions, but you can have a little fun in how you put them all together - experimentation is the name of the game! This Halloween revival, set 40 years after the John Carpenter original and discounting the entire subsequent sequel lore of Michael Myers, had the potential to be an interesting experiment, but it's carried out with all the zeal of someone joylessly following the instructions to build a sturdy IKEA bookcase.


At this point in the history of the Halloween franchise, when we've already had several sequels, spinoffs, remakes and more, the only constant is a man in a mask who is scary in any place at any time - so you tell me the value of a movie that clings this closely to the original? Halloween movies will always exist, because they make money, because people like to be scared, and that 'why' will always be a more important factor than the 'how' of the story or the 'who' of the filmmaker. David Gordon Green's Halloween is no better or worse than Rob Zombie's Halloween - both movies showed reverence to the source material and had a good understanding of the character of Michael Myers - but neither movie does anything interesting with him.

Other than its enduring popularity, this movie does not justify its existence. It does nothing exciting with the Halloween formula, save for a few scenes in the finale that hint at a clever subversion before bottling it. It's still bone-headed: prison guards decide to move Michael Myers for the first time in 40 years, by bus, on Halloween night. DUH. There's a tonne of scenes that look cool, like the red and white chequer board asylum yard, that serve no narrative purpose whatsoever. And despite the time shift, Halloween has not been modernised in any way, other than the requisite scene of a mobile phone being taken out of action, and one of the guys who eats shit mentions he has a podcast. 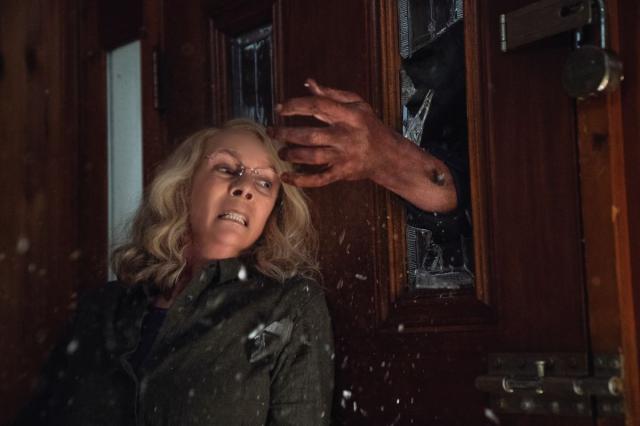 "I'M COLLECTING ON BEHALF OF UNICEF"


There is a slight tang of the #MeToo movement in the way Laurie finally faces her male oppressor, although it's quite possible I'm projecting a topical filter on a film that doesn't earn it - either way, there was definitely a missed opportunity here to capture the zeitgeist in the same way that last year's Get Out did with the racial politics of the moment. 1978's encounters have left 2018 Laurie paranoid, outcast and increasingly estranged from her family, but though this movie purports to care about her mental state, it seems more interested in turning her into Sarah Connor.

Should we expect more from the tenth instalment in the series? Maybe not: this is the ninth Halloween movie that has failed to live up to the original. You know the old saying: fool me once, shame on me, fool me nine times in a row, shame on you. You could argue that any attempt now to make a serious Michael Myers movie is misguided, because Michael Myers is pure trash, he's ruined, a beat-up, old-ass motherfucker still coasting on his early fame, like a shit end-of-the-pier comedian still doing the local pubs and clubs. Say what you like about the old sequels, but at least they knew they were terrible: you can't tell me the makers of 2002's Halloween Resurrection, starring Busta Rhymes and Tyra Banks as cast members on a haunted house reality TV show, thought their film was going to stand the test of time.

"
"
Halloween features just enough pop-philosophy to justify its multiple murder scenes
There's an air of arrogance about Halloween 2018, probably not helped by the off-hand way in which 30-odd years of sequels are curtly dismissed with meta-jokes ("Oh, you're the new Loomis," says Jamie Lee Curtis to the film's doctor). The entire film is dressed up in pseudo-psychology and characters trip over themselves to apply pretentious motives onto Myers, yet the movie itself is not really interested in the answer, featuring just enough pop-philosophy to justify its multiple 18-rated murder scenes. Michael Myers is not a riddle waiting to be solved - he's the boogeyman. Stop trying to quantify a ghost story. And stop actually referring to him as "the boogeyman" in the film.

It's even pretty poor at covering off the fundamentals. I'm struggling to recall one decent jump scare that wasn't in the trailer, and there are precious few scary scenes where you can properly forget yourself in fear. At times it leans so heavily into cliché it veers into parody, like the scene where Laurie tracks Myers into the one room in her house that just happens to be full of creepy old mannequins. The film's one suspenseful scene features your man Mike standing in a yard lit with motion sensors - then the light turns off. I would happily trade a few of the grislier death scenes for more moments like this. At least the new old score still delivers, John Carpenter making sure at least one element of Halloween 2018 feels authentic.

Additional observations
- The dialogue is really weak in places, and quite self-defeating too; at one point, Laurie says "I prayed every night he'd escape... so I could kill him" and the one cop goes "That was a dumb thing to pray for".
- There's much discussion of Michael Myers' reluctance to talk, so much so you're sure they're setting something up, but... no. Silent but deadly.
- Andi Matachak, who plays Allyson, Laurie's granddaughter, is very good despite not having very much to do.
- There's a scene that really bugged me and I hope it bugs you too, when a character in the Haddonfield Asylum stands on the edge of a 'do not cross if you value your life' kinda line, then proceeds to stretch his arms wayyy out over the line - but not only does no one say anything, THERE AREN'T EVEN ANY CONSEQUENCES.
More:  Halloween  Michael Myers  David Gordon Green  Jamie Lee Curtis  Will Patton  Judy Greer  Horror
Follow us on Twitter @The_Shiznit for more fun features, film reviews and occasional commentary on what the best type of crisps are.
We are using Patreon to cover our hosting fees. So please consider chucking a few digital pennies our way by clicking on this link. Thanks!