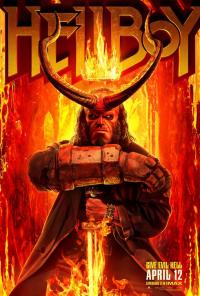 In this social media driven age of bite-sized criticism and speedy reactions, opinions often get reduced to simplistic extremes. Fleabag is perfect. Bohemian Rhapsody is the worst. Paul Rudd is life. Liz Lemon is everything. Aquaman is honking bonkersness. Avengers: Age Of Ultron is the best film of the MCU. So it’s surprising when a film like Hellboy (2019) comes along and defies such snappy judgement. And it’s not because the film isn’t bad –it is, it's awful - but because it is neither entertainingly good nor entertainingly bad. It just plays out to dull, listless effect, utterly devoid of a single scintillating superlative that can be attributed to it. It’s a near-unremarkable, mostly forgettable, practically ineffectual film in almost every way. After first coming to the big screen 15 years ago to keep the theological peace, Hellboy has ended up confined to cinematic purgatory.


It’s difficult to pinpoint exactly where the film goes wrong. David Harbour is a great match for the gruff cynicism of the demonic anti-hero, with enough comic sensibility to undercut the epic stakes with quippy moments. Meanwhile, the monster designs are particularly imaginative, and director Neil Marshall massively increases the horror and gore quota to a degree that arguably has no place in a 15-rated film. There’s a ton of action, constant momentum and some actual themes about the nature of morality worthy of exploring.

But this reboot isn’t going to be remembered for any of that. Instead, it will be defined by what it lacks. Things like 'coherence', 'a decent script' and 'any kind of peak or trough or stand-out moment in the entire film'. Most of all though, it distinctly misses something that Guillermo del Toro’s previous efforts, for all their flaws, had in abundance: personality.

Despite it starring these three absolute charmbags.


This new Hellboy movie is the Michael Owen of fantasy films. It’s the train Wi-Fi of monster flicks. It’s a grey, washed-out day spent waiting for a plumber who never arrives while listening to a Maroon 5 deep-cut playlist on non-premium Spotify. In an era of mega-nerds swinging wildly from utter devotion to violent outrage, this Hellboy is exact, perfect room temperature, not managing a single needle flick on the barometer of fan interest. And this is all somehow much, much worse than the film simply being bad.

"
"
This Hellboy 2.0 is less World Destroyer and more screensaver
Part of the problem is that we meet Hellboy when he is already up-and-running as an investigator for the Bureau for Paranormal Research and Defense, complete with bad attitude, a drinking problem and daddy issues, but the film fails to dig into any of it. He is a surface-level 'red guy with horns' given as much depth as the onslaught of CGI that surrounds him in every action scene. Ian McShane is the adoptive father dishing out the matter-of-fact tough love like he is any of the other characters McShane has played in the last 10 years. Meanwhile Lost star Daniel Dae-Kim sometimes turns into a jaguar, and American Honey’s Star, Sasha Lane, has some ill-defined clairvoyant abilities. Together they are the team that face off against Milla Jovovich’s Nimue, a blood queen trying to destroy all of mankind, who was once defeated and dismembered by King Arthur and has now been put back together again. It seems, however, that they couldn’t find her original English accent and had to cobble one together out of some bits of plywood and an old shoebox.

The biggest problem is the action, because there’s a lot of it and, despite Hellboy’s Right Hand Of Doom, none of it packs a punch. One scene in particular - clearly designed to be a show stopping sequence - sees Hellboy fight three giants while the camera weaves in and out of the battle in one continuous take. It would be impressive if it weren’t for the fact that the whole shot is so obviously faked you can practically see the greenscreen vaulting horses and tennis balls on sticks. And this is the issue throughout the film - nothing ever feels real. This Hellboy 2.0 is less World Destroyer and more screensaver.

This is a pretty accurate representation of the whole film.


The script also shoulders some of the blame, of course, and not just because of the incomprehensible monster mythology that it conjures, which is to be expected for a film like this. Its fails mostly at providing frequent stabs at humour that contain actual humour. Throughout the film, there are comic beats that are a perfect set-up for a crowd-pleasing gag, only for the screenplay to deliver a "woah" or a "Sorry, my bad!" or a "Are you serious?". The timing is good and Harbour’s performance is fine, but they are both working with first-draft filler jokes that writer Andrew Cosby put in just to get the damn thing finished and forgot to go back to.

On the flipside, scenes featuring dimensional witch Baba Yaga are quite effective, even if they do seem to belong to a different Hellboy plot. And... I’m struggling to think of any other moments of interest. Stephen Graham voices a pig-man-monster? He is somehow in the whole film and I can't remember a single noteworthy thing he did.

This, of course, is the point. In the grand scheme of comicsy horror movies, this reboot won’t be remembered alongside other films you’ll have completely forgotten existed. Films like Dracula Untold, Priest, Season Of The Witch, The Last Witch Hunter... ugh, Hansel & Gretel: Witch Hunters. Some movies feel destined to end up in a supermarket bargain box, but this is more likely to end up in one marked 'Lost Property', never to find anyone who cares about it enough to take it home.

- The one emotional scene in the film is undermined by the fact that one of the character’s torsos is completely CGI’d and attached to the end of a giant tentacle that is protruding out of someone’s mouth. I just kept thinking "please don’t hug, please don’t hug".
- Daniel Dae-Kim and Sasha Lane are both utterly terrible in this film and I really want to believe that it has nothing to do with them and everything to do with the poor script and absolute lack of chemistry they have as a team alongside Harbour.
- The film is intent on setting up further sequels and often at the expense of doing anything interesting itself. Two mid/post-credits scenes will mean nothing to those that haven’t read the comics, and the last scene in the film is a climactic moment... that just teases the introduction of another 'forthcoming' character.

More:  Hellboy  David Harbour  Neil Marshall  Milla Jovovich  Ian McShane  Sasha Lane  Daniel Dae Kim
Follow us on Twitter @The_Shiznit for more fun features, film reviews and occasional commentary on what the best type of crisps are.
We are using Patreon to cover our hosting fees. So please consider chucking a few digital pennies our way by clicking on this link. Thanks!