Review: Host is a techno-horror that dials up the scares 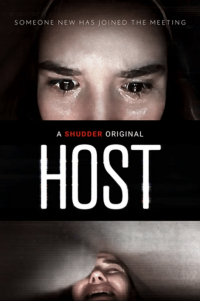 31st October 1992. I am 11 years old and about to become part of a very special club: children who were accidentally allowed to stay up late for BBC's Ghostwatch. For the uninitiated; Ghostwatch was billed as a fun live spook hunt from a haunted council house, which spiralled out of control as the pipe-clanging spirit of a disfigured paedophile assaulted Saturday morning kids TV hosts Sarah Greene and Craig Charles, apparently killing a number of the crew, before beaming itself into a television studio and possessing the UK's common sense uncle, Michael Parkinson. It was terrifying. The ensuing furore in schools and media ensured the broadcast was shelved for years. But the damage was done, scars were formed - and the next Ghostwatch has been sought out ever since.


There's been nothing like Ghostwatch since that fateful night, because there couldn't be anything like it after. A perfect marriage of friendly faces, dark storylines, and the balls to trick a nation of viewers who trusted The Beeb deeply at a time when Uri Geller was still conning gawping masses, meant the distinction between a scripted drama and pant-shitting real-life terror was ripe to be blurred. The one thing that enabled this demented vision to come alive was the technology of the time: portable cameras the size of small pianos, outdoor broadcasting trucks bursting with cables, call centres staffed by rows of operators ready to believe you. And because all this occurred pre-live rewind, pre-internet and pre-mobile phone, the BBC had control of the narrative in every possible respect.

Director Rob Savage's Zoom call-centered horror, Host, is not quite the same thing as Ghostwatch, but it holds the honour of being as close as we'll get until the next big evolution in audio-visual communications (probably injecting movies directly in our eyeballs, or holograms that chase you). We already know the events aren't real going in - the cat is forever out of the bag on that one in our connected age, and so immediately falls into the entertainment category. But where we do find similarities - like The Blair Witch Project brokering the analogue/digital divide in its use of early internet viral potential - is in underpinning a story by taking full advantage of the current technological landscape. 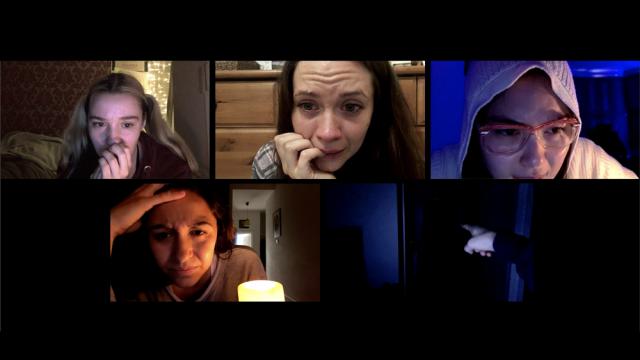 That's a lot of words to basically say "clever use of webcams," and you'll no doubt have heard of Host via excited word of mouth. If not then all you need to know going in is it's a horror film that makes clever use of webcams - specifically the Zoom platform, with the entire story taking place within laptop and phone screens. So now that we're up to speed; is the hype justified? At a brisk 57 minutes there's a lot of work to do: introducing six characters and establishing not just their relationships but also their locations, setting up a plot involving an online seance, and then watching various fates play out as something supernatural and murderous joins the chat.

Remarkably, between the jump scares and characters running for their lives, Host manages to also be incredibly funny. Again, this is partly down to quirks of technology, and how our interactions are blinkered in unusual ways. Without revealing too much, one moment that left me in fits of giggles was the sight of a character triggering a face filter, causing a snake tongue to poke out of her anguished open mouth during a moment of mortal peril. Gimmicks aside, the cast have a genuine chemistry, spouting natural dialogue that doesn't feel derivative or forced - I'd happily watch the same lot solving internet mysteries Reddit-style every week, or discussing their love lives like a kind of Friends for hermits.

That blusher with that eyeshadow? Horrific!

It's testament to co-writers Savage, Gemma Hurley and Jed Shepherd that they've tapped into the idiosyncrasies of the 'Zoom generation' so quickly, and so successfully - reportedly the film didn't exist two weeks before it was released exclusively on the horror streaming platform Shudder. In fact the speed may be symptomatic of the Covid-19 lockdown conditions: one late night government announcement and we could all be back to the grindstone in a wink of one of Rishi's dreamy eyes, meaning the moment would have passed. But Savage is a veteran of the high concept horror short, and his experience crafting on a budget has paid off here.

While Host is not entirely as innovative as the positive buzz may suggest - Unfriended and Searching come to mind - distinction often comes down to execution, and Host finds just the right sweet spot between pace, gore, pay off, and not outstaying its welcome. There's talk of the impending 'Covid Era' of cinema being an unwelcome reminder of this stressful year, but horror films are there to confront and poke at subjects that make us uncomfortable. Whether driven by a need to use the technology to their advantage, or the technology determining the flow of things, Savage and co. have created what will be recognised as one of the defining horrors of our times, as The Blair Witch Project and Ghostwatch have done before it.