Review: I'm Thinking Of Ending Things is Kaufman at his most alienating 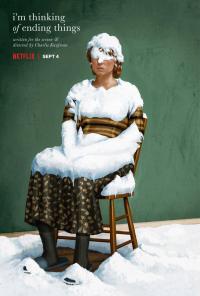 It's both a blessing and a curse being plugged into Twitter 24/7. When a highly-anticipated new film comes out from a figure such as Charlie Kaufman and the discourse turns divisive, you can't help taking a peek to see what the fuss is about. But then as soon as you do that it starts to cloud your own judgement - takes from all across the heat spectrum making your timeline resemble a Nando's PERI-ometer. What makes it worse is when a movie comes loaded with references and semiotics, enabling the cultural gatekeepers and aggressive fanboy apologists. Not saying that's what has happened with the auteur Charlie Kaufman's genius new film I'm Thinking Of Ending Things, which I definitely understood and will cut you if you suggest otherwise, but it's a distinct possibility.


At time of writing I am on the cusp of 40 - the exact midpoint for average UK male life expectancy - with an elderly parent in the cruel throes of Alzheimer's, and a young child who finds new ways to better my achievements with each passing day. To visualise this we can imagine a long road where in the distance stands my ailing father, and looking down the opposite direction is my son. A short step forward is all it takes and suddenly that distant node is gone, and behind me all my Tony Hawk's Pro Skater records lay in tatters.

So I find myself consumed by thoughts about the past, the future, kickflips, and the inescapable fact our physical vessels are biologically designed to deteriorate until they can no longer function and we will all eventually enter an irreversible state known as death. That may be a depressing start to a film review, but the headspace I currently occupy fits pretty well within the sphere of experiences Kaufman, and source novel author Iain Reid, have touched upon in their efforts to bottle all the potential of a human from the perspective of someone who persistently underachieves. 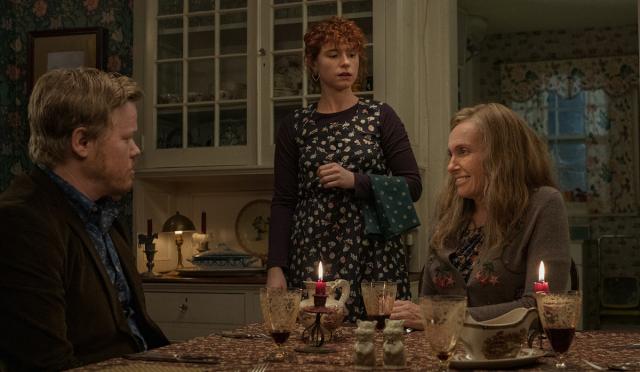 On the surface I'm Thinking Of Ending Things is presented as a road trip movie, where we follow Jessie Buckley and Jesse Plemons during a snowy journey to meet Plemons' characters parents, as Buckley's character contemplates aspects of their relationship. Their characters do have names, but it's difficult to talk about without spoiling everything. As, it turns out, is most of the film. What I can say is that when we meet Plemons' folks (Toni Collette and David Thewlis), and Jessie Buckley starts to learn more about her boyfriend's upbringing, things start to unravel in a deliberately confounding way.

At the heart of the story is a misdirection - one that provides a level of extraction you can't really get across in a trailer unless you were watching via some sort of 4D magic hologram device (don't bother checking, they don't exist yet), and one that shifts the viewer from a linear path onto somewhere altogether more abstract. It's all very hard to define in that typically Kaufman way, meaning any literal expectation of a Meet the Fockers-esque cringefest you may have had will be subverted, while leaving interpretations open to the viewer as to What It All Means.

There are definite answers to be found, however - viewers who make it through the purposeful obfuscation of shifting places and times will be rewarded - although this appears to be the source of the aforementioned Twitter divisiveness, with the aforementioned twist being a slightly tone deaf device for such existential woe. But as I've gone to pains to mention, you will almost definitely get more out of the film if you happen to align with aspects of the story, as I did, even though those aspects may be symptomatic of something else going on entirely. Fuck me this is hard work. 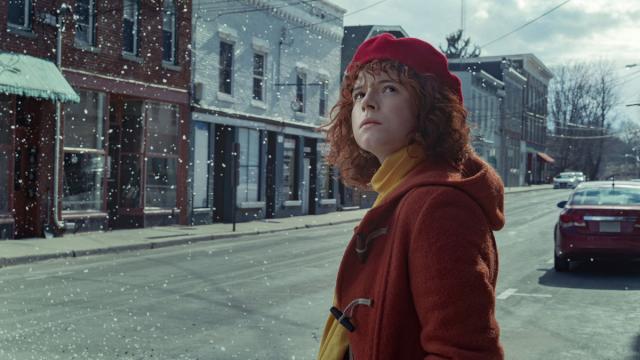 One complaint I've seen levelled at I'm Thinking Of Ending Things is it reveals Kaufman at his prickliest; trying to make sense of his regrets and coming off bitter - which by that argument makes it a film that exists purely to satisfy his own fragile ego. Another way to look at it would be to say Kaufman is exploring his legacy before it gets too late to make sense of it himself. By touching on such personal anxieties about decline Kaufman has no doubt recognised something he felt a kinship with, and being a filmmaker was able to bring the whole thing to fruition. I mean it's literally his job to make films, you can't fault him for that. But with pointedly obscure blink-and-you'll-miss-them references, this all points to a narrow field of vision in terms of target audience.

There's a point where I'm Thinking Of Ending Things stops being a film and starts to become a concept. The question then becomes how much of that concept you understand, and how much of it you can apply to your own situation. So I guess what all this means is, the film white male middle-aged underachievers fearing for the decline of their creative worth have been waiting for their whole wretched lives is finally here, hooray! And if you don't match any of the criteria yet still find something in it to reconcile with, then great, even though it probably wasn't meant for you. I'm beginning to see why people are hating on Charlie Kaufman now.

More:  Jessie Buckley  Jesse Plemons  Toni Collette  David Thewlis  Charlie Kaufman  Netflix
Follow us on Twitter @The_Shiznit for more fun features, film reviews and occasional commentary on what the best type of crisps are.
We are using Patreon to cover our hosting fees. So please consider chucking a few digital pennies our way by clicking on this link. Thanks!