Review: In Fabric is dressed to kill but won't suit everyone 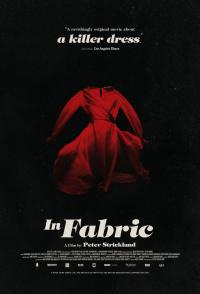 Sometimes a surreal arthouse film comes along that contains just enough logic to give you a sense of what it’s all about. Even it’s just one interpretation. Even if it’s just a guess. Other surreal arthouse films aren’t so obliging and, in those instances, it’s always useful when you can be given a clue to work on, maybe from, say, a director Q&A that immediately follows the screening. I’m not saying that’s what happened for me, of course, but I can say that In Fabric is definitely about mankind’s intimate relationship with our own clothes and how extremely powerful that personal closeness becomes. I can also confidently say that the shoot mostly took place in Croydon and there were several planned scenes that didn’t get filmed because of budget and time restraints. But that might just be my interpretation.


For a film that is so focused on the feel of a material and the brush of fabric on skin, writer-director Peter Strickland seems determined to make his story as intangible as possible. In essence, it’s about a haunted dress. It’s often creepy, frequently thought-provoking and sometimes actually quite hilarious, but it is still, at its centre, a film about a really, really sinister frock. That said, it’s never actually scary. There are no jumps or shocks. This is a ghost story that wants you thinking about touching cloth without ever making you do so.

While other recent surreal horror movies focus on eerie tones and moods - Suspiria And Mandy come to mind, possibly because those are the last films I’ve seen that very broadly sit in this same sub-genre - they do still usually track a certain degree of progress. There’s a hint of plot that helps you cling to a narrative. Here though, the semblance of story that exists takes a backseat to style and convention, and Strickland somehow manages to pack a lot into the film but also a whole lot of nothing. 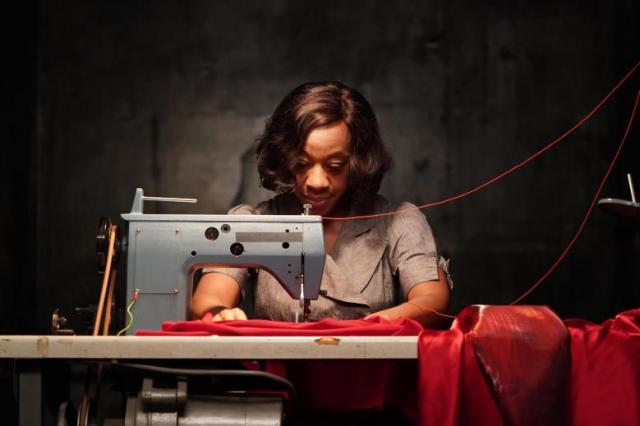 Literally nothing to see here.


There’s kitchen-sink drama in single mum Sheila competing for her son’s affection with antagonistic girlfriend Gwen (played by Game Of Thrones’ and Star Wars’ Gwendoline Christie, whose previous credits clearly account for her name appearing at the top of some promotional materials despite relatively little screen-time). There’s also the hint of an otherworldly witches coven operating out of a retro department store (hello, Croydon!) that provides the film’s most satisfying moments of true cult horror. And then there’s a comedy duo in Julian Barratt and Steve Oram, two overly familiar bank managers who appear to take pride in wanting to know personal details about everybody in their community.

"
"
It feels as though the film has accidentally explored a different tangent
The broad range of characters and set-up certainly aren’t a hindrance to the film’s achievements. If anything it all adds to the intrigue surrounding a plot that constantly feels deliberately just out of reach. Without giving too much away though - partly for fear of spoilers and partly because it’s frankly impossible - In Fabric suffers from one major flaw. It’s one that, even while the film’s appeal so clearly depends on audience tastes, seems to be an objective error of judgement.

At about the halfway point, Strickland’s narrative loses its way, switching its primary focus from being on the dress to following the day-to-day life of a new character who gets introduced halfway through. It all stitches together at the end for a rather satisfyingly chaotic and twisted climax, but there’s certainly approximately 20 minutes in the middle of the film where it feels as though the film has accidentally explored a different tangent. 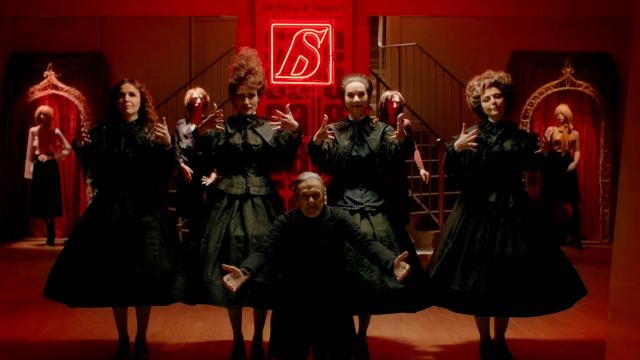 "Come back, evil evening gown! We miss you!"


So, I guess what I’m saying is, I have no problem with bizarre, ethereal films that look to invoke an atmosphere rather than tell a specific story. And I have certainly no problem for such a film to be based around some very menacing clothing, because the importance we place on clothing and the emotional values we often attribute to them are definitely interesting concepts worthy of exploring.

But for Strickland to have chosen this subject matter, and to have placed such emphasis in particular on the tactility of textiles, it’s seems a huge shame that, for a very brief moment along the way, he somehow managed to lose his thread.

More:  In Fabric  Peter Strickland  Gwendoline Christie  Julian Barratt
Follow us on Twitter @The_Shiznit for more fun features, film reviews and occasional commentary on what the best type of crisps are.
We are using Patreon to cover our hosting fees. So please consider chucking a few digital pennies our way by clicking on this link. Thanks!