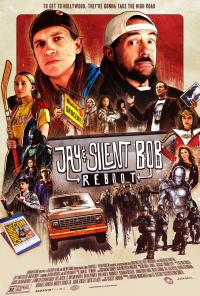 "So you're the target audience for that," a wag tweeted when I expressed an interest in Kevin Smith's first return to the Askewniverse proper since Clerks II in 2006. It's true, I am. And I'm not even that ashamed of it. In fact, Kevin Smith's films have aligned with several formative periods of my life, becoming dashed in parts of my brain like a ship on rocks, so for better or worse I'll always give the guy a chance. Although as much as I'm fond of the silly goof and his sweary adventures, you'll still never catch me in a pair of jorts.


Jay and Silent Bob Reboot is very clever for something so resolutely dumb. It isn't really a film; more a series of cameos and recycled plots from across the Askewniverse - Smith's pot-fuelled, profanity-laced New Jersey story sandbox, that so far has contained drama, comedy and fantasy. It's a deliberate choice by Smith, intended as a gift for fans, as well as allowing for digs at what the film industry and comic book fandom has become in the nearly two decades since it's direct predecessor, Jay and Silent Bob Strike Back, was released.

More touchingly it's a family affair, bringing together Smith's wife, and daughter, Jennifer Schwalbach and Harley Quinn, in prominent roles, as well as featuring longtime collaborator Jason Mewes' daughter in a brief but sweet bit part, showing how far Mewes has come since his drug addict days (or that he's come once at least anyway). So far, so schmaltzy - you'd be forgiven for thinking Smith had gone soft - but where the film really finds its barbs is in a skewering of the heap he's risen to the top of by a mixture of hard graft and good-natured osmosis, and first in line is himself. 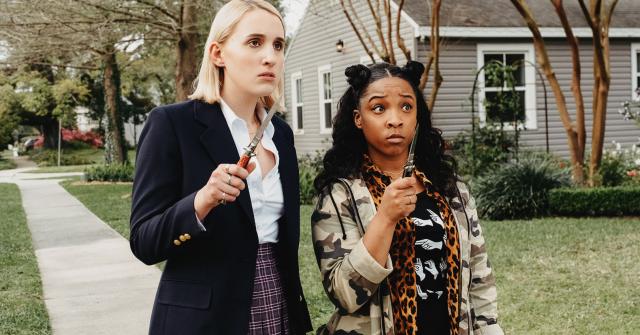 
The gimmick for Jay and Silent Bob's "reboot" is a shot at the concept of rebooting, seeing the pair going cross-country once more to stop a reboot of the Jay & Silent Bob movie made during the original Jay & Silent Bob Strike Back film in 2001. Within this setup we have a version of our reality set inside the movie, where Kevin Smith and many of his celeb friends exist alongside the characters they play. It's not anywhere near as confusing as it might sound though, and is mostly used as an excuse for cheap laughs. And that's fine: with Smith's films the cheaper the laughs, the better.

In that vein, anything and everything about Smith's life and career is up for ridicule: his films, his connections, his fashion sense, his very public plane-based Twitter meltdown, and even his near-fatal heart attack a couple of years ago and subsequent vegan lifestyle. But self-deprecation is Smith's default setting, and provides a bulletproof shield from any criticism that he's taking his position as a god amongst geeks for granted. The overall picture is a lovingly meta-infused series of in-jokes that delivers for the target audience - namely Kevin Smith, and idiots like me. 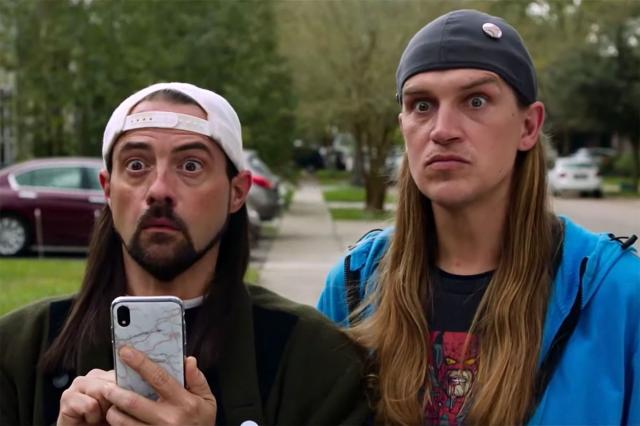 Probably tweeting about doing a drug


But for anyone not familiar with Smith's crude sense of humour, or the canon he's plucking characters and events from, you might get the impression his entire ouevre is based on getting high, making dick jokes and getting Ben Affleck to pull stupid faces... uh, you would be 100% correct in that assumption. Admirably, however - in what feels like a zenith for a series hallmarked by mixing puerile humour with bittersweet emotional beats - the heavy lifting is given to Mewes, whose ultra-vulgar Jay character attempts to make amends with the fittingly foul-mouthed daughter he never knew he had.

There's about 25 years of onboarding getting even fans of the series to the point where Jay's relationship with a child could possibly be the driver behind one of these films, but it works so well precisely because they're prepared to say fuck it and go with that idea. The stoner shtick may be getting a little long in the tooth but it seems Smith is keen to wrap up his characters, with further instalments of Clerks and Mallrats promised, and Jay and Silent Bob Reboot proves he's still capable of creating genuine pathos out of the most unlikely of scenarios.

More:  Kevin Smith  Jason Mewes  Harley Quinn Smith  Shannon Elizabeth  Jennifer Schwalbach  Brian OHalloran
Follow us on Twitter @The_Shiznit for more fun features, film reviews and occasional commentary on what the best type of crisps are.
We are using Patreon to cover our hosting fees. So please consider chucking a few digital pennies our way by clicking on this link. Thanks!