Review: Messiah asks if a new God is the real deal, or a very naughty boy?

Ooh who is he? Where does he come from? How did he get here? Is he a con artist? How does he have all this insider knowledge? Can he read minds? Was he sent by God? Can he actually perform miracles? Or is he a terrorist? Is he going to start a war? Will he unite religions and heal the world? But more important than all of the above: how does he keep his hair looking so luxurious?


Who doesn't love a good mystery? That was a rhetorical question - of course you do, who doesn't? That was another rhetorical question - of course you do, who doesn't? And another one aaargh. See how confusing it all is? If only someone could come along with an easy answer for everything so we didn't have to think about things like our purpose in life, or worry about whether our opinions on Star Wars are valid. That's essentially what people are clinging on to The Second Coming for, right?

Netflix's new series posits what would happen if such an agitator came along: able to converse with the common folk in a way that makes everything make perfect sense, while rattling the status quos forming the divides in our societies. Or in their societies, rather. It's easy typing this in a Greggs in Essex knowing my liberal surroundings free me from worries such as what God will make of going for a second cheese and onion bake, but in the Middle East - where our supposed new Messiah first emerges - it suddenly becomes a much more touchy subject when idealogies are pitted against each other. 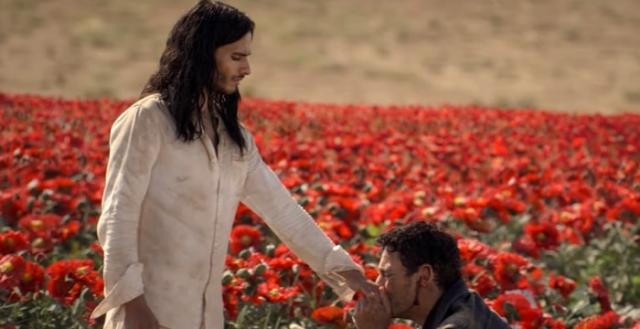 Why is it always kissing hands instead of, say, giving an Amazon gift card?


The mysterious man doing the pitting, with his relaxing voice and dreamy eyes, is Al-Masih (Mehdi Dehbi). Al's party trick is to perform a miracle, vanish without a trace, then reappear elsewhere on the planet in an apparent act of teleportation - all broadcast live on Facebook. It's got the powers-that-be nervous (not the Facebook part - they love having every detail of your life, all your sexts, your selfies, and your location beamed directly to the secret data centre underneath Jeffrey Epstein's island), which means the CIA have to get involved when Masih pops up in America.

Cue ballsy/determined/troubled agent Eva Geller (Michelle Monaghan). She's not one to be fooled. Or so she thinks. Turns out Al-Masih has a way of making things happen to people who get too close to whatever the truth is, which is - inconveniently for those trying to shut him down - making them question all sorts of things they previously knew to be true, and kind of proving he's the real deal in the process. So you get it: "is he, isn't he?" dragged out for ten episodes. Make of that summation what you will.

"
"
the ambition is to deliver a message of global reconciliation
What Messiah does really well is show how quickly information spreads across the globe in our always-online digital age, and what happens when an idea captured in the public imagination spirals out of control. More so, it's a terrifying prospect that there are actors willing to pull on the strings we dangle from while presenting themselves as our best friends. Having lived through the reckless political gambles of Trumpism in the US, and the sociopathic, destructive policies of the Tories in the UK - both being conduits of populism with a knife behind their back - it's easy to treat such hopemongering with cynicism, which Netflix is relying on.

With such a deliberately provocative premise built in service of one question, Messiah lives or dies by your reaction to the big reveal. The chain reaction set-off by Al-Masih's arrival is an interesting enough set of events, but without the end goal of discovering Masih's true identity (and hence intentions) these are just local squabbles, and it's clear the ambition is to deliver a message of global reconciliation for our times. Netflix have dabbled in the shared consciousness space before with shows like Sense8, and Messiah is a similar line in conspiratorial do-goodery concerned with the state of the planet. A noble concept but can you really trust anyone these days, no matter how much hope they represent, or how great their hair is?

More:  Mehdi Dehbi  Michelle Monaghan  Timer Sisley  John Ortiz  Netflix
Follow us on Twitter @The_Shiznit for more fun features, film reviews and occasional commentary on what the best type of crisps are.
We are using Patreon to cover our hosting fees. So please consider chucking a few digital pennies our way by clicking on this link. Thanks!