Review: Murder Mystery commits the crime of not being very mysterious 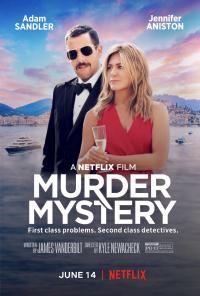 Shhh the kids are asleep. It's mummy and daddy time now, a chance to do all the things you can't do during the day. Let's make a cup of tea and put on a film. Two hours gone and now it's bedtime. The film was fine. Not good, not bad. Just fine, but more importantly we survived today. Lamp off. Start again tomorrow. One day closer to death. Everything is just fine, and it's not for me to judge that your life has become a static series of achievement-void days spent clockwatching and sometimes not even seeing the sun.


Murder Mystery has done serious business for Netflix, opening to their best weekend ever with over 30 million accounts streaming it. How that translates financially is hard to discern, but Adam Sandler's Happy Madison production company does some serious bank of its own and he signed up for four Netflix exclusives, so everyone must be getting fed and watered somehow. There's no mystery (*wink*) why it's done so well; Sandler and Jennifer Aniston are a match made in bankable everyperson heaven, and at the end of a long day folks just want to unwind with some familiar faces and a cheap laugh or two, don't they?

Personally I find this acceptance of the mediocre troubling - we should demand and reward better films in the goal of becoming more progressive ourselves, rejecting the dumbing down of media and the wider landscape it feeds into. But demonstrably this is not what the masses want, and movies are an industry after all. So what do we do? Accept that crowd-pleasing films have to litter multiplexes in order to allow studios to fund arthouse thinky passion projects, or push the notion that film as a medium should challenge, educate and be used for altruistic purposes? What I'm asking is: how to enjoy movie? 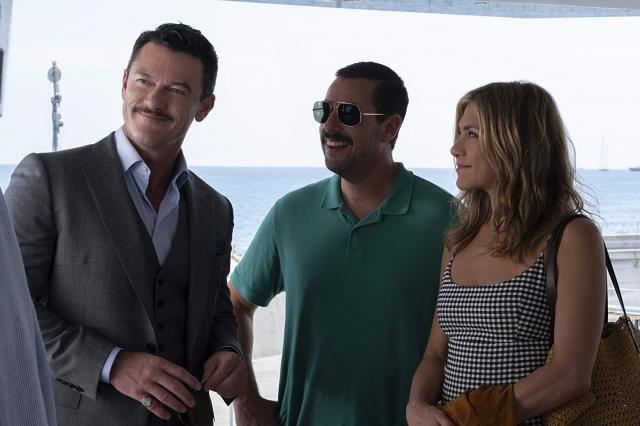 At least visit a Moss Bros before going on a millionaire's yacht, Sandler!


The initial excitement around Murder Mystery is the prospect of a good old fashioned whodunnit. The USP of this one is the accused trying to solve the crime they're accused of, as underperforming cop Nick Spitz (Sandler) and his dissatisfied hairdresser wife Audrey (Jennifer Aniston) vie to prove their innocence after being framed for an inheritance-based murder aboard a millionaire's yacht. I've seen others say the mystery format is dated, but when done well - Poirot, Columbo, Bergerac - it's a timeless setup with the potential for a lot of fun, and often comes embedded with commentary on class and society.

Unfortunately these opportunities are left unexplored, settling instead for Nick and Audrey just loudly introducing themselves and generally fitting in just fine. In a way it's quite refreshing to see people simply getting along, but when the blood starts to flow and the fingers are pointed, the couple set about proving their innocence with a glee that borders on demented. Now I don't know about you but if someone I'd just met was murdered in the room next to me, and then it happened again the next day, I would absolutely lose my shit. For Nick and Audrey it's a chance for some light jokey banter and to add a spark to their dwindling relationship.

I like Adam Sandler and Jennifer Aniston a lot, despite not particularly enjoying many of their films (although the portmanteau 'Saniston' does sound like a toilet product - I suspect they'd enjoy the coincidence too). They know they're not acting powerhouses, playing to their strengths: silly faces and occasional mawkishness, exasperation and pratfalls. It works well when shorthanding scenes and they're a good match on screen. It would be welcome to see more movies between them in the same vein, even if Murder Mystery was a bit of an uninspired trek. It killed a few hours when I had a few hours I wanted to kill, though. And if that's not a roaring endorsement, then I don't know what is.

More:  Adam Sandler  Jennifer Aniston  Luke Evans  Gemma Arterton  Luis Gerardo Mendez  Dany Boon  Terence Stamp  James Vanderbilt  Netflix
Follow us on Twitter @The_Shiznit for more fun features, film reviews and occasional commentary on what the best type of crisps are.
We are using Patreon to cover our hosting fees. So please consider chucking a few digital pennies our way by clicking on this link. Thanks!