Review: One Cut of the Dead proves there is life in the zombie movie 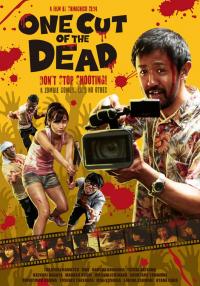 How do you watch films? For me it's a late evening treat after a long day busting my hump, slumped on the sofa, remote in hand scrolling Netflix for 5-45 minutes before picking a Nic Cage movie from last year nobody has ever heard of. But sometimes you already know what you want to watch, and thanks to a tip-off I'd heard One Cut of the Dead was suddenly available on Amazon Prime. The hype was intriguing: a tiny horror from Japan that had become a smash hit. The only thing left to do was convince my life/viewing partner, thus introducing the concept of The Sell. And how do you convince someone to willingly watch a quirky high concept Japanese meta farce? Could go either way - I mean we've all seen The Happiness of the Katakuris, right? In the end I told her it was a zombie film, which is kind of true, until it isn't.


Films are an illusion; a weaving of sound and image designed to trick your brain into thinking made up things like Mothra and Jared Leto are real. The best ones stay with you after the final explosion has fizzled out, and while it's rare for a film to become the talking point of conversations for days to come, it's rarer still for a film to so confidently invite you behind the curtain and its own construct literally be the talking point. Which is ironic because once One Cut of the Dead flips from Pledge to Turn to Prestige, it becomes a joyous, life-affirming experience you'll want to run straight out and tell people about.

Except you can't, because - like a trick - to reveal the secrets contained within One Cut of the Dead is to undo the magic writer-director Shinichirou Ueda has so carefully and precisely constructed. So then how do you review a film where you need to tell people about the film to get across what a great time they'll have watching the film you're not allowed to tell them about? The answer is very difficultly and ramblingy.

If you've seen the trailers then you'll know already that One Cut of the Dead begins with a 37-minute continuous sequence purportedly capturing a real life zombie outbreak on the set of a zombie movie shoot - the titular 'one cut'. This turn of events enables the movie's director, Higarusha (played with a kind of hangdog manic exasperation by first-timer Takayuki Hamatsu), the unique opportunity to enhance his efforts with some real life gore. In the first of several meta twists Higarusha becomes part of the performance himself, yelling at his confused and frightened actors to keep up with the action and not get bitten. 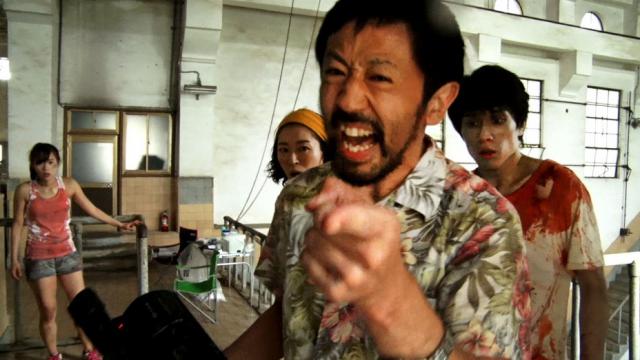 
The sequence ends and credits roll, but we're only just over a third of the way into the running time. "It can't be over yet!" you'll shout, "Stick with it!" someone will shout back. Which is all fine because One Cut is as much about audience participation as it is about paying attention. The following hour unravels the why and more importantly when of how Higashuri and his cast are doing what they're doing, jumping back to events prior to the zombie shoot and barrelling forwards with a new sense of perspective.

But it's not just a gimmick. At its heart One Cut of the Dead is a film about ambition, opportunity, creativity, and all the happy accidents between having ideas and realising them that you could never plan. It's a film within a film and also a film about itself, making the most of a cleverly assembled, yet deceptively simple playground. It's a loving tribute to inventiveness and film-making that by the end left me with a massive soaring rush of joy in the most absurdly silly of places.

I guess the point of writing about any film in this capacity (i.e. a random man on a website) is to either recommend it or tell you to steer clear - a flawed system because even terrible films are worth watching to some extent, either to gawp at or hate-watch. How do you even judge what is "good" without absorbing what is bad anyway? You've got to sate your curiosity and find out what works for you really. That aside you should definitely watch One Cut of the Dead because there's nothing else like it, and it is really, really good.

More:  Zombies  Shinichiro Ueda  Takayuki Hamatsu  Yuzuki Akiyama  Harumi Shuhama  Kazuaki Nagaya  Hiroshi Ichihara
Follow us on Twitter @The_Shiznit for more fun features, film reviews and occasional commentary on what the best type of crisps are.
We are using Patreon to cover our hosting fees. So please consider chucking a few digital pennies our way by clicking on this link. Thanks!