Review: Parasite delves into the darkest recesses of humanity 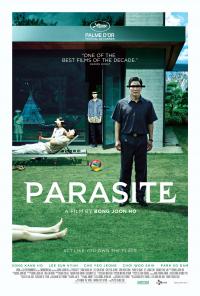 Donald Trump gets mentioned way too much on these pages considering his contribution to cinema consists of a handful of production credits and cameos, including the one in Home Alone 2 where he checks out Kevin's bum. But for once the Incurious Orange may have done some good with his big racist gob. By launching a scree against South Korean-set Parasite for having the audacity to win a Best Picture Oscar in a language he can't understand - no doubt due to his brain shrinking down his neck in fright at the thought of reading subtitles - Trump has accidentally made Bong Joon-ho's class examination a talking point outside of Film Twitter. I bet he feels really silly now.


It's strange how class divides still exist. There are way more people living in poverty than there are the super rich and their acolytes, so we could easily swarm all over them and distribute their wealth, optionally eating their brains and fashioning masks from their perfectly hydrated skin. But somehow we've allowed ourselves to be convinced we need these invisible barriers, to validate an ill-conceived notion of betterment through wearing clothes that fit and owning a nice car. And I guess it's this self-blinkering that has led to a situation where half of the money on the planet is being hoarded by 1% of the population.

So it's pretty clear that poverty is going to become one of the great shamings of the 21st century, and those responsible for funnelling resources away from where they are most needed are all definitely going to be punished in a big ol' reckoning. Can't wait. In the meantime we'll have to entertain ourselves with fictions about our current state; works that tell relatable stories without shying away from the misery to keep the anger topped up. But how are we going to do that without constantly depressing the shit out of everyone? We turn to another curious human trait that seems to go hand in hand with fear and oppression: humour. 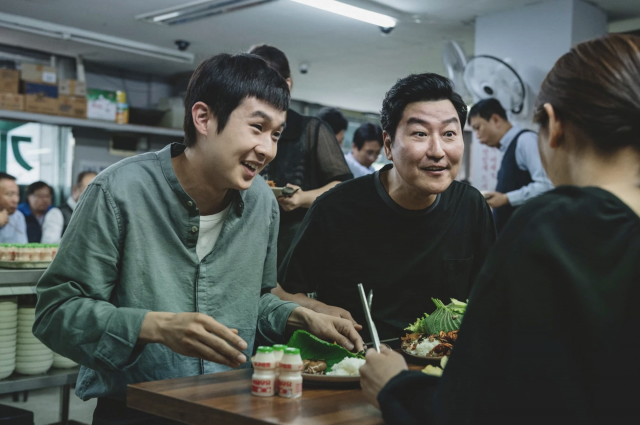 
Acclaimed South Korean director Bong Joon-ho has made a career out of shining a light in the darkest of corners, often populating his films with well-meaning but oafish characters in order to mine comedy that ranges anywhere from irony to slapstick - ensuring sympathy but that they're still having a rough time of it. It's an odd mix but Bong has a deft ability to bring the strangest of elements together, as evidenced by a body of work as technically accomplished as it is successful in creative terms, commercially, and among his peers within the movie industry, despite being weird as hell.

Parasite distinguishes itself from Bong's previous efforts by giving us an entire family - the Kims - made up of horrible, Roald Dahl-esque crooks, out to deceive a rich family - the Parks - using their various underhanded talents to land sought-after household roles, deposing the current help in the process. The Kim's scheme works, and soon they find themselves earning enough to entertain the prospect of moving out of their cramped basement home - a common dwelling in South Korea where houses built since the 1980s feature government-mandated bomb shelters due to the threat from North Korea, but have since become squalid apartments for poor families.

But if the Kim's scheme sounds shortsighted then you'd be absolutely right, and a good portion of the film is spent keeping the lies going like spinning plates, with us wondering when the first dish will wobble off and smash. This deception is merely the start of things, however: it's when - and how - the Kims discover the Parks have a shelter of their own underneath the super swanky house they've usurped their way into, and what awaits when they descend, that things really ramp up. Or down. Or up and then down, and then up again. 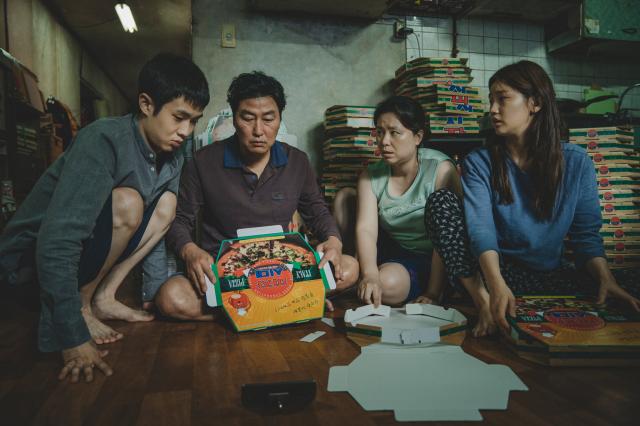 Nobody is truly poor if they've got a pizza


An underclass literally living underground like filthy trolls may sound on the nose, but it's a grim reality for many that Bong has seized upon as the genesis for his and co-writer Han Jin-won's story. The Kims are clever people with potential, keen to earn an honest living - it's just the unbalanced situation that has driven them to such feckless desperate measures, and it makes you wonder what the inflection point for such behaviour is in a culture where manners and servitude are drilled into those who can't afford not to have them. The Kims have clearly reached their limit. What's yours?

Like Bait before it we're asked to consider the effects of wealth disparity, materialism and greed. Although in Parasite who exactly the victim is becomes deliberately obfuscated by the actions of both the Parks - living oblivious in a luxury home while the outside world falls to bits - and the Kims - driven to greed by necessity and creating further victims down the ladder as they plant a foothold on the higher rungs of society, enacting the very thing that kept them in their place. Capitalism, eh, who'd have it? Oh that's right every nation on Earth.

So it's a class thing. But before you drift off into a deep think, there's Bong's dark humour and the pitch perfect performance of his cast - including regular Song Kang-ho - to appreciate, rounding out an offering that showcases South Korean film firing on all cylinders. But you didn't need me to tell you any of this. With four Academy Awards and audiences reacting to word of mouth - including from the most powerful man on the planet - it's clear Parasite has touched a nerve wherever you come from. The world may look glum right now, but it makes for some great cinema. And isn't that what really matters? No, no it's dismantling the systems of capitalism. We should get on that.