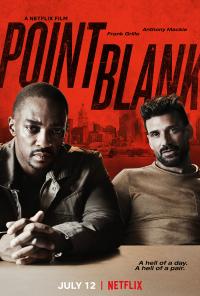 It's finally happened: I've watched a film I can't find an angle to wring several torturous paragraphs out of. That's not to say there's anything offensively bad about Joe Lynch's new action flick Point Blank - there's not - but there's nothing particularly notable to write about either. I'm at a loss for opinions, but even worse than that I'm at a loss for words, and as a film blogger can only exist if there are words to scroll past to the star rating, I can already feel myself fading away...


Are there too many films? I mean besides superhero films? (which is an automatic yes, especially after this weekend Jesus) I only ask because often a film will appear from a well known director featuring household name actors that is obviously going to be a decent piece of work, but because the landscape is already saturated with a dozen other quality releases that week it will fizzle out of sight - leaving you to wonder whether it ever came out at all, until the faded remains of a poster campaign fly past on a bus. This, I fear, will be the fate of Point Blank: A Perfectly Adequate Film.

As if to exacerbate the point I'm bludgeoning; Point Blank is a remake - one of several spun from the same material for different regions since the original French-language version came out in 2010. You'd think this rush to re-tell would indicate some earth-shattering, culture-spanning feat of storytelling, but the truth is the plot and characters are generic enough to transpose to other parts of the world that rehashing it again and again is probably a safe bet. In fact I'm surprised "The Film They Can't Stop Remaking - Coming To A Country Near You!" isn't part of the marketing. Maybe it should be? Have that one for free, Hollywood! No wait, pay me you snakes. 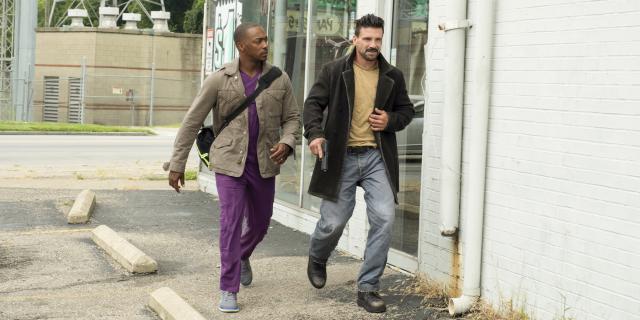 
There's nothing really wrong with remakes - cast and crews gain experience, often a contemporary spin breathes new life into a concept, and if it makes money for studios then it can't be all that bad. It is a Movie Industry after all. Marvel took a gamble on bringing back capes and tights, and now they've got a factory that prints money, freeing them up to do all the weird stuff. Disney know snapping up all the IPs will strengthen their position, even if they're at risk of monopolising all of media everywhere and presumably some future competition regulation will catch up with them. But still. Nic Cage needs to afford more dinosaur skulls somehow.

Bringing this back to the film in hand, Point Blank tells the worn tale of a good guy, nurse Paul Booker (Anthony Mackie), caught up in the world of roguishly chiselled criminal Abe Guevara (Frank Grillo). Paul has to break Abe out of hospital after Abe's brother, Mateo (Christian Cooke), kidnaps Paul's *extremely* pregnant wife. They've got a debt to pay y'see, and them's good boys really, just forced to hustle all them's lives is all. Paul's wife is so ready to drop. Like, three fingers easily. On top of all this drama is a conspiracy involving corrupt cops who framed Abe for a political murder, which is how he ended up hospitalised in the first place.

Although, is that a necessarily a good thing? I read an article recently arguing the mediocrity of a Batwoman TV show pilot was actually a strength - the gist being it would give room for the actors to grow within a low expectations setting. Unless it gets cancelled for being shit. But I like to think about these things another way. When you have inexperienced or ill-fitting cast and crews, or underfunded productions, this can often lead to happy accidents: ad libs caught in the moment, unusual shots by necessity, etc. The removal of the ability to operate comfortably can lead to sparks of genius. Point Blank takes a by-the-numbers plot and floats to a finish. There's nothing wrong with that. Just nothing note-worthy. And in the battle for our attention that's not going to pay the bills.

More:  Anthony Mackie  Frank Grillo  Marcia Gay Harden  Teyonah Parris  Christian Cooke  Markice Moore  Joe Lynch  Adam G Simon
Follow us on Twitter @The_Shiznit for more fun features, film reviews and occasional commentary on what the best type of crisps are.
We are using Patreon to cover our hosting fees. So please consider chucking a few digital pennies our way by clicking on this link. Thanks!