Review: Possum is a horrifying nightmare to make Marenghi proud 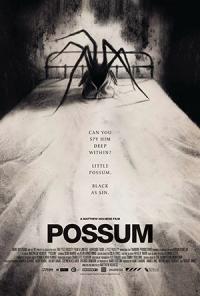 "Who am I? Perhaps you have met me twixt sleep and wake, in the penumbra of uncertainty you call 'unconsciousness'," the great Garth Marenghi once said. "Or perhaps you've met me at a book signing." While the basic set-up of Marenghi creator Matthew Holness' directorial debut could have easily been cooked up by the horror writer/dreamweaver himself, there is no follow-up punchline in sight here. Possum is all demented nightmare fuel filtered through mental instability and emotional repression. Its business is 'chill', impure and simple.


With minimal plot, dialogue and characters, Holness explores a quietened, internal horror that manifests throughout the film as disturbing visuals and occasional flashes of sheer terror. And at the centre of it all is the most horrifying puppet you have ever seen.

Sean Harris stars, swapping out his Ethan Hunt-bothering Syndicate calm for a pitiful, child-like persona, trapped and tortured by metaphorical demons of his past that might also be literal demons of his present. Returning in disgrace to his childhood home in Norfolk, he vows to destroy his puppet - apparently the source of his torment and it's easy to see why: huge props go to the prop department for attaching a spookily smooth death mask head to the leathery hide and legs of a spider. Fuck.

This thing is captivating and sickening in equal measure and Holness knows exactly how to use it; the odd leg twitch here, the glimpse of its ghostly face there, and in between shots of the whole thing just hanging limply on the wall staring blankly ahead. Some films leave an indelible mark in your mind, and this one will have you wishing you could scrub your brain clean and set fire to the sponge afterwards. 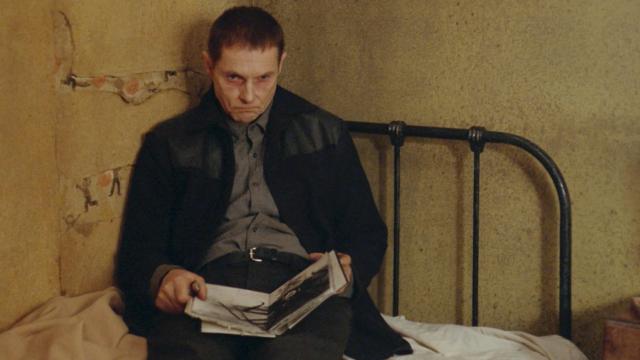 This may have actually happened to Sean Harris prior to filming.


To make things even more grimy and uncomfortable, the introverted Philip is met at the house by his repulsive uncle Maurice, played by Alun Armstrong, who points nail-dirt fingers at his nephew in wretched judgement. And he might have sound reasons when it transpires that the schoolboy that Philip saw on his train at the start of the film has gone mysteriously missing.

Consisting of sparse landscapes and sparser character interaction, Harris' central performance makes the film. When he's not stammering or scrunching his face, he's traipsing from location to location with an overly deliberate gait, like he's pretending to be a grown-up but hasn't quite figured out what they do with their hands yet, his arms hanging unnaturally close together like he has just climbed out of his own puppet box. It's a compelling performance from Harris, who spends most of the film carrying himself like he is literally carrying himself. 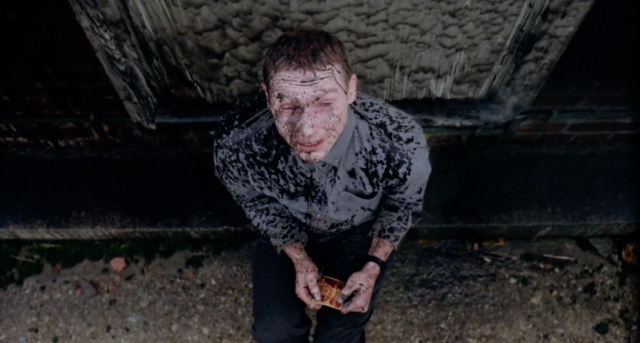 
Holness marries this performance with Ring-video montages acting as interludes between scenes, showing us images like balloons against filthy walls as the room fills with smoke, all alluding to Philip's unknown early trauma. These creepy pocket-shots of weirdness contrast against the rest of the film, where rotting wallpaper and mouldy curtains bleed into Norfolk's broken estates and country wastelands, and it's all explored with time to spare. This is English rural horror at its most effective.

It's a shame then that a quick ending and wrap-up sadly don't do the rest of Holness' efforts justice, but with the film lingering in your consciousness long after it's over, this is a stand-out terrifying debut from the brains behind one of the funniest shows ever. It's easy to see that this is down to Holness exploring a real-life horror as much as the kind of supernatural monster usually confronted by his comedy creation. Hopefully, in his future filmmaking career, his films will always say something, even if it's just something simple like "Don't genetically engineer crabs to be as big as men".

More:  Possum  Matthew Holness  Sean Harris  Alun Armstrong
Follow us on Twitter @The_Shiznit for more fun features, film reviews and occasional commentary on what the best type of crisps are.
We are using Patreon to cover our hosting fees. So please consider chucking a few digital pennies our way by clicking on this link. Thanks!