Review: Rim of the World walks a fine line between stupid and clever 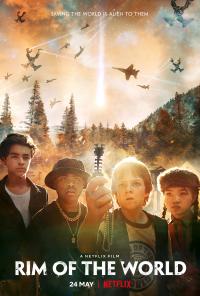 McG's (ugh) Netflix Original (UGH) Rim of the World (UGHHHH) is a sexist, misogynistic, inexplicably racist low-hanging-fruit-picking embarrassment that by rights should be shot into the sun and every trace of its existence burnt to ashes, and the people responsible sterilised so they don't accidentally send their kids to Hollywood film school and make another one like it. That would be if the sexism, misogynism and racism wasn't being delivered by 13-year-old children. Which I'm afraid in the arena of bad taste qualifies this for some sort of filmic equivalent of the Nobel Prize.


Summer camp is a frequent sight in American films. We don't have it here in the UK, not properly, but it seems like a fun idea - a place where kids can play with ropes and knives, experience the great outdoors, and perform rites of passage that can result in lifelong friendships. It's practically a genre in its own right, inspiring such classics in the oeuvre as Ernest Goes to Camp and Addams Family Values, plus a bunch of slasher flicks taking advantage of the isolation and darkness. You can hang a lot on the setting, but I'm not sure I've ever seen the summer camp used as a backdrop for an alien invasion movie.

And it turns out it's a perfect fit. Rim of the World gets to the point quickly, introducing our young protagonists in their natural environments before dumping them in the wilderness. Alex (Jack Gore) is a bookish space nerd, Darisuh (Benjamin Flores Jr.) is a brash wannabe ladies man, Gabriel (Allessio Scalzotto) is a tough and suave punky Latino, and Zhen-Zhen (Miya Cech) is an older-than-her-years runaway with a secret. The kids adjust to their new surroundings and each other - and then there's an alien invasion. It doesn't get much more complicated than that, but does it need to be? 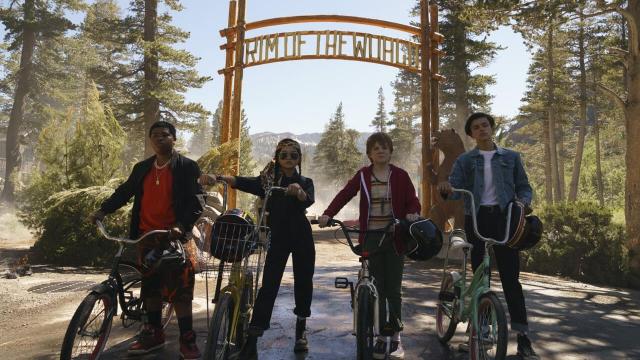 The Stranger Things kids wanted their bikes back by teatime


As is usual with these harks back to adventure movies of the '80s it's up to the kids to save the day, growing and learning to put aside their differences along the way. The kid's skills that will prove vital in the endgame are signposted from the off, but that's no surprise either. Obviously it's going to be a little by-the-numbers if it's a homage to a type of movie that got done to death three decades ago - and one they no longer make. Although is that a true statement?

About halfway through I found myself wondering who Rim of the World is intended for. The jokes and language are adult, but the actors are young teens (were they sat down at any point to have the title joke explained? Seriously?). So I paused it to make a cup of tea and started looking up the cast. Turns out a number of the older actors are internet celebrities - viners, YouTubers, influencers, that sort of thing.

And then a realisation dawned: why am I trying to figure out why they melded a family adventure and bad taste together, when every kid has the toxic power of the web in their back pocket - this is the natural state of things in 2019. This *is* what a family film looks like now. Kids read reddit and 4chan over their Ricicles. Rimjob jokes are par for the course these days. Spielberg would totally have put one in if he thought he could have gotten away with it, the old perv. 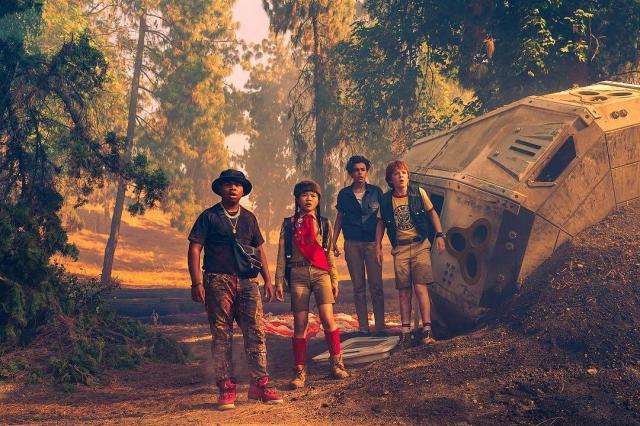 An orange filter: the colour of peril


So it's an awkward fit, but if you go with it there's a lot of fun to be had. I am of the opinion that if you're going to do bad taste then you can't do it by halves. Whether you're trying to induce shock or laughter or revulsion you have to fully commit. It's all about getting that reaction, whatever the cost. Land it early and with enough panache, and you'll have carte blanche to get away with anything you want for the next 90 minutes. Miss your shot though and the audience will poke holes in your efforts like fingers through toilet paper.

But films aren't just a collection of sensation-grabbing set-pieces - they have rules to engage with your brain, and viewers need someone to connect with. To truly make a memorable experience you have to bring the moments and the characters together in one overall satisfying form that makes the world feel a little different after the conclusion has been reached. In Rim of the World a young boy puts an alien penis in his mouth. At some point someone made that creative choice.

I guess the conclusion I'm circling is that there's nothing wrong with Rim of the World's blending of adult-orientated bad taste and kid-friendly family adventure if you accept that it's 2019 and everything is terrible.

More:  McG  Jack Gore  Miya Cech  Benjamin Flores Jr  Alessio Scalzotto  Andrew Bachelor  Annabeth Gish  Zack Stentz  Netflix
Follow us on Twitter @The_Shiznit for more fun features, film reviews and occasional commentary on what the best type of crisps are.
We are using Patreon to cover our hosting fees. So please consider chucking a few digital pennies our way by clicking on this link. Thanks!