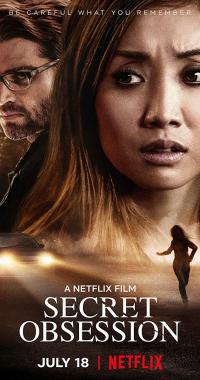 Secret Obsession is on a par with Murder, She Wrote, Diagnosis Murder, or any other daytime TV show with 'murder' in the title, which has just struck me how psychopathic that was to expose a generation of elderly people to. The film is so cheap I was convinced an opening chase sequence would lead to a fake-out, ending with the victim waking up in a sweat, or an in-movie director shouting "cut!" as it's revealed we were on a movie set all along. It's another worrying sign of the content Netflix is curating. So was this TV movie-level rubbish dumped on Netflix, or dumped in the bins out back and somehow ended up on their servers? No I don't know how that would work either, but it makes more sense than the killer's plan.


Premeditated murder is a difficult crime to commit, isn't it? In this age of CCTV and digital fingerprints there's no real way to get away with it. But even if you do cover your tracks well enough, from the point of the view of the police there's a body and a list of probable suspects - all they have to do is wait it out until one of them slips up. Justice is patient, as the saying goes. Sitting on your arse doesn't make for great cinema, however (someone please tell Nicolas Winding Refn), so it's fortunate the bad guy in Secret Obsession is so comically inept you wonder whether the intention was to subvert the thriller genre with an inverted plot where the culprit becomes an unwitting victim of his own relentless stupidity.

If only this was that self-aware. The seeds of bad logic are sewn early on, after Jennifer Williams (Brenda Song) is chased into traffic by an unseen attacker, leaving her with a bad case of Hollywood Amnesia. In swoops loving husband Russell (Mike Vogel), ready to nurse Jen back to health with his charming manners, chiselled abs and big house. Everything seems idyllic for Jen's recovery, but as her memory begins to return so too do details of the night she lost it, including hints to the identity of the attacker, who is Russell. It's Russell. Russell did it. I mean, there's no question at this point that Russell did it. 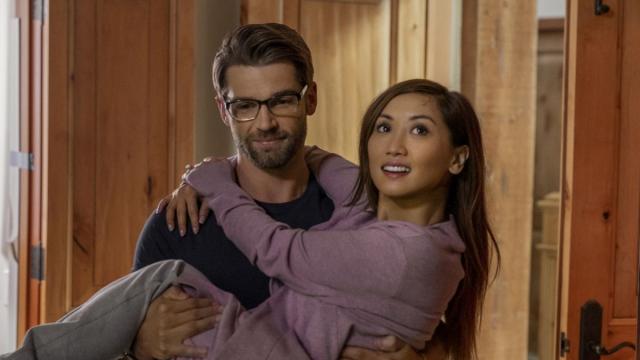 Russell, probably wondering how he can further incriminate himself


Russell, who is actually Ryan, is the kind of guy who doesn't take rejection well - so badly in fact that when co-worker Jen spurns him he concocts a plan to get into her life by murdering her parents, offing her actual husband (the real Russell) and photoshopping himself into their wedding photos, and holding her prisoner in his very lovely house. Although I think that was his plan. Everything is setup for that to happen except for the fact in the opening scene he's trying to kill her, or kidnap her at least. It's extremely convenient for Ryan, then, that Jen's bump on the head leaves her in the exact state required for his scheme to work, otherwise all that time spent applying drop shadows would have been for nowt.

To recap: Ryan killed Jen's family, tried to kill/kidnap Jen, but when that failed somehow had an elaborate backup plan from another movie waiting in the wings. The only question remaining is whether Ryan will get away with it (there are a million other questions but we're operating on the level of this movie so let's slow things down a bit). But as we've established, these sorts of crimes are doomed to failure from the offset - it just takes a bit of time to unravel and someone to keep an eye on things. Cue Detective Frank Page (Dennis Haysbert), who is about to have his easiest day at work ever.

Frank uses some good old fashioned Detective Intuition to intuit there's something dodgy about "Russell", leading him on a wild chase to such exciting locations as... Jen's workplace, where he finds out immediately that the man he knows as Russell is an imposter. His next stop is Jen's parent's house, where he finds their bodies. Like, they're just there still rotting away. So Ryan's an idiot. Or maybe it's all a metaphor for the kind of short-sighted thinking that has led to many of the world's problems today. Society deftly wrapped in a microcosmic murder-kidnap mystery. Or something about male toxicity. No, no he's definitely an idiot.

I'm pinching the bridge of my nose and sighing quite a lot as I recall these events. Are there any positives to take from Secret Obsession? Not really. It's one of those films you can only review by describing the plot as it doesn't have any particular theme or message. It did make me laugh that Russell's name is a homonym for the word 'rustle', bringing up images of Ryan trying to sneak about outside someone's house without sounding like a crisp packet. So in conclusion: I need to cancel Netflix.

More:  Brenda Song  Mike Vogel  Dennis Haysbert  Peter Sullivan  Netflix  Kraig Wenman  Peter Sullivan
Follow us on Twitter @The_Shiznit for more fun features, film reviews and occasional commentary on what the best type of crisps are.
We are using Patreon to cover our hosting fees. So please consider chucking a few digital pennies our way by clicking on this link. Thanks!