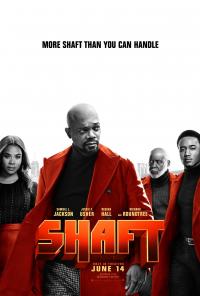 The danger with judging films based on what you want rather than what you get is you'll forever be on the lookout for things that don't agree with your blinkered view of the world. It's a slippery slope; one minute you'll be tapping furiously into Twitter trying to get Piers Morgan's attention, the next setting up a change.org petition with the vitriolic entitlement of a superhero movie manbaby. That said, they've somehow made a new Shaft film with the exact same comic inclination as an Adam Sandler movie, and while I'm happy the baddest badass motherfucker in town is back, I've never forced myself to sit through something so much in my entire life.


There are three generations of Shafts in Tim Story's new John Shaft film, Shaft - a direct sequel to John Singleton's 2000 Shaft, itself a follow-on from the 1971 Shaft. Shaft I is Richard Roundtree, back in a surprisingly fleshed-out role, and who looks goddam glorious for a 76-year old. Samuel L. Jackson returns as Shaft II, retconned as Shaft I's son with a single line of throwaway dialogue (he was Shaft I's nephew in the 2000 film), and he also looks great for a 70-year-old, although I think they've de-aged him for a few flashback scenes. Must be in his rider.

The big shake-up is the newbie on the block, John Shaft Jr. aka Junior aka Shaft III, played by Jessie Usher - an FBI cybersleuth who stands for the opposite of the other Shafts. So that's three John Shafts, three movies called Shaft. If you think this sounds like a uniquely amazing opportunity for a return to the gritty, ridiculous, iconic blaxploitation era of old in a legitimately authentic way then you'd be right - it does *sound* great. In practice though it is *horrible* and almost entirely down to the maddeningly ill-judged comedy. 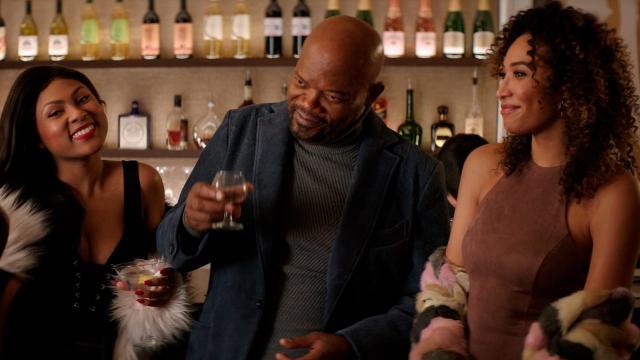 Samuel L. Jackson there, giving a shit about the quality of the films he appears in


Here's a sample: Junior and Shaft II reunite after many years apart, when Jr. hires his dad to solve the death of his best friend - an ex-soldier who belonged to a support group called 'Brothers Watching Brothers'. Shaft II is disappointed in his son because of his perceived effeminate nature and aversion to violence (he's actually just polite and sensitive), but agrees to help. The pair go for a recce and Shaft II experiences some gay panic at a bunch of young men hanging out, going so far as to make a lewd joke at their expense.

It's meant to be an example of Shaft II being out of date and embarrassing himself - the problem with this is Shaft's setup as a universally-savvy ultimate font of knowledge. So with that in mind it's just a shameful moment in a woefully unfunny film that shouldn't even be attempting low grade humour in the first place, let alone going after minorities considering Shaft's angle - and black cinema as a function - has always been about the struggles of black people. But wait it gets worse: we're treated to some good old fashioned misogyny, and in a really bizarre way too.

The throughline for Junior is his metamorphosis from nerdy computer whizzkid to Shaft-worthy badass. Eventually Junior's mum, Maya (Regina Hall), shows up and gets caught up in a gunfight in a crowded restaurant. The Shafts shoot up the place and save the day, cue Maya reprimanding Shaft II for getting Junior into trouble in the first place, which is taken as an opportunity for Shaft to remind Maya in front of all and sundry how violence turns her on, oh and also her nipples are protruding. Yes, that happens and is about as crass as it sounds. But wait. It gets worse. 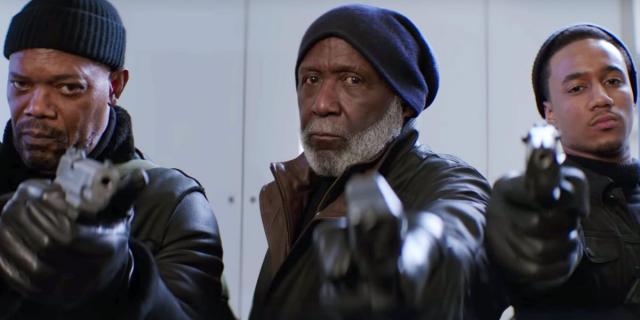 Although Shaft 2038 is going to be fucking amazing


In the same scene Junior's love interest, Sasha (Alexandra Shipp), is having some bottom-lip-biting revelations of her own, having just witnessed Junior gun down a bunch of thugs despite her previous interest in him being his sensitive nature. Do guns turn women on now? Should I put one on my shopping list next to Galaxy bars and Axe body spray? It's a weird character development - good guy cop to unforgiving killer - and at odds with the near-progressive introduction of Junior as a woke symbol of modern blackness. It's one scene in many that takes almost as much as it gives.

Actually 'two steps forward, one step back' is quite a good summation of the film as a whole, even if sometimes it does leap five steps backwards. It's great to see a young black man championed as intelligent and emotional - High Flying Bird and the Creed series have done a lot to help change this perception too - but then Junior being clawed back down by his dad's inability to get on board with where youth culture is, and Junior's receptiveness to this, undoes a lot of what you'd think would be the film's central message: that it is possible to escape a life on the streets.

This is all moot. Whatever Shaft is saying about race, authority, age, gender or masculinity - which are interesting talking points no matter how badly fumbled they are - I keep going back to the rancid humour. It's a creative choice the producers and filmmakers made to go down this sorry route, and the original Shafts signed up to it. The film is out there now, and it's the sort of crass, vulgar, tasteless mess you'd expect from a Happy Madison production. Shaft now exists on a plane shared by Paul Blart and The Zohan. I can't dig it.

More:  Jessie Usher  Samuel L Jackson  Alexandra Shipp  Regina Hall  Richard Roundtree  Tim Story  Kenya Barris  Alex Barnow
Follow us on Twitter @The_Shiznit for more fun features, film reviews and occasional commentary on what the best type of crisps are.
We are using Patreon to cover our hosting fees. So please consider chucking a few digital pennies our way by clicking on this link. Thanks!