Review: The Boy Who Harnessed the Wind soars, is uplifting, etc Q) What do Titanic, Zero Dark Thirty and The Last King of Scotland have in common? A) They all used real history to tell a story involving fictional characters. In the case of Jack and Rose they were avatars to illustrate class divide. Zero Dark Thirty needed a way to connect the hunt for Bin Laden from beginning to end so they made up a CIA agent. And who even knows what the author of The Last King of Scotland was smoking because I can't think of another story like that at all. It's like they made up a best friend for Hitler. Why would you do that? Honestly. Point is, when you want to stretch history for entertainment you have to be delicate with the facts, otherwise you risk misrepresenting what actually happened or offending those who were there. Although Billy Zane can do what he wants. The man is a gift.


I'm always curious about how people approach films based on real events. Apollo 13? They survived. Ali? Punched a guy. The King's Speech? He got it out. The words I mean, not his nob. Does it cheapen committing history to film for dramatic purposes when we know the outcome already? Real life is often dull periods of waiting, making that squeeze into a two-hour running time a tricky task, which can lead to exposition-heavy dialogue and condensed scenes that come off a little worthy. Or maybe we've been spoilt by the shock twist - something fetished over ever since The Sixth Sense made a gagillion dollars - that it now comes as an expectation of how we judge movies, and events in hindsight are by default predictable.

One of the few genres to escape this sort of overthinking is the inspirational biography, which exists to, well, inspire. The Boy Who Harnessed the Wind tells the true life story of William Kamkwamba (Maxwell Simba), a young man on the cusp of adulthood in Malawi. William is booksmart, and hopes to make his family proud by pursuing an education, but a famine exacerbated by political turmoil see his dreams dashed as his father, Trywell (Chiwetel Ejiofor, who also writes and makes his directorial debut), forces him to work the land to ensure the family can survive. 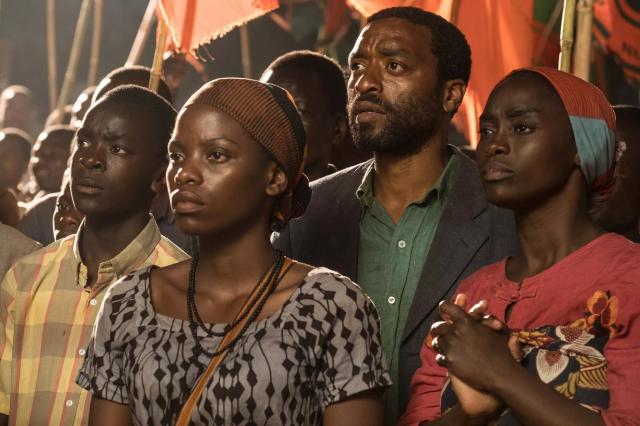 
William has other plans, deploying some cunning social engineering to continue his studies - where through a series of coincidences and realisations, he devises a system using old bike parts to convert wind power into electricity, in turn powering a pump to bring water up from a well. It's a life-changing invention for many Malawians, who rely on the seasons to provide rainwater for their crops. William just has to convince Trywell his invention is worth spending the time and resources on - a risk at a critical juncture.

It's a solid "I'm bigger and older therefore know better" setup, pitching William against his own father's wishes and the wider spectre of looting brought about by the desperation of his fellow villagers, and government violence in order to keep control of a swiftly deteriorating situation. Although 'setup' and 'pitch' do belie the fact all of this actually happened. Ejiofor does well to balance William's family predicament with a precarious time in the country's history. No punches are pulled - we see tribal leaders beaten by government thugs as they appeal for help, showcasing the very real danger faced for simply speaking out, but we never lose sight of William's main obstacle: his father, who just wants to get his family through a difficult time the only way he knows how.

Happy scenes as the review steers clear of flatulence-based humour


And that's the crux of The Boy Who Harnessed the Wind really - lack of progress due to things working a certain way. That said, there's no reliance on religion or tradition as a crutch to hang Malawi's problems on. The corruption of Malawi's government is laid bare. Ejiofor does dabble in the odd bit of symbolism, but that's as mystical as we get, and the one standout usage is additive rather than stereotypical, confronting William with the literal death of a rite of passage as he decides to forge his own future. The Kamwambas live by their own hand - they're practical, rational people caught up in a shitty situation, and when William's handiwork pays off they happily welcome his innovation, as well as his ingenuity. It's refreshing and never not genuine.

So yeah; so far, so Wikipedia. We know the outcome of this story which does reduce the stakes somewhat. Does that mean it would be better told as a leaflet dropped through people's letterboxes? It's still possible to evoke emotions through images and interactions, and William's smile when he proves his naysayers wrong - potentially changing the lives of millions of people in his homeland - is a heartwarming coda to a story that could have ended so differently. But it didn't, proving that adversity can be overcome no matter how small your roots - and if that's true for William, then that's true for you also. All it takes is the courage to blow off the past.

More:  The Boy Who Harnessed The Wind  Maxwell Simba  Chiwetel Ejiofor  Lily Banda  Assa Maga  Joseph Marcell  Netflix
Follow us on Twitter @The_Shiznit for more fun features, film reviews and occasional commentary on what the best type of crisps are.
We are using Patreon to cover our hosting fees. So please consider chucking a few digital pennies our way by clicking on this link. Thanks!