I don't mean to spoil the block party

Review: The Lego Movie 2 plays nicely but has no new surprises

My nephews were younger when the first Lego Movie came out. I mean, everyone was. But in 2014 they were five years younger; a lifetime when you're under ten. The elder one loved it; the younger probably not quite at the age where he could be relied on to sit through anything for more than ten minutes without chewing his shoes. They'll love this too, because they're still under ten and they're idiots, despite the older one being quite capable of comprehensively schooling me about dinosaurs. Me, I think maybe the magic has faded a bit.


I asked the older one the moral of the story after we'd watched the last one, his second viewing. "Everything is awesome?" he offered, not unreasonably. I was more trying to imprint on him the film's message of remaining true to yourself. These days he has an instinctive understanding of narrative structure (last Christmas he complained to me that the same thing happens in every episode of Scooby-Doo) so he's better equipped to pick up on a film's complexities. Which is a shame, because the sequel is a lot less nuanced.

Yes: film reviewer in "jaded and dissatisfied" twist. This children's film for which I am far from the target audience fails to capitalise on its predecessor's use of self-conscious narrative techniques! But there is a lot less here than there was before; maybe, in fairness, because the first was such a lovely surprise, dense with great jokes, triumphantly satirising commercialism while aware that it was itself a massive toy advert.

And it's the satire that's conspicuous by its decline. I don't see enough of the sharpness or the self-aware attitude to its own reason to exist that characterised the 2014 film. It does have an absolutely solid grounding in what we now know to be its container story, though: as teased five years ago, IRL kid Finn has to share the basement's Lego space with his sister Bianca, who insists on mixing in her own Duplo. This translates for the Lego characters into Apocalpyseburg, a wasteland which the Duplo characters keep invading, then there's a kidnap and a rescue and some good gags along the way, and then a brilliant end credits song by The Lonely Island. 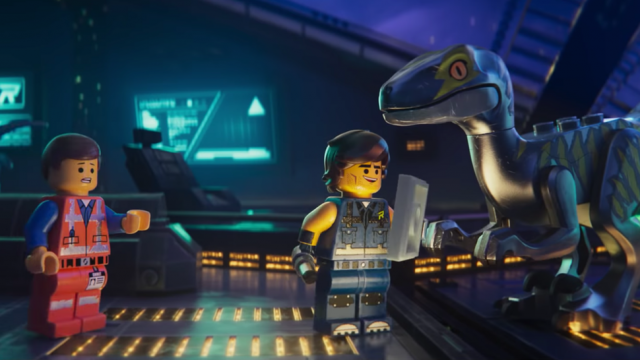 OK fine, it's got dinosaurs too, you're right, it's amazing.


So you're happy enough. Metaphorically, all this translates very neatly into a persuasive moral about sharing with your sister, and recognising that even though her bricks don't match yours and she keeps making Jurassic World velociraptors chase Harry Potter even though it DOESN'T MAKE SENSE, all she wants to do is join in, not ruin everything. This reinforces the fun of throwing lots of different bits of Lego in together and creating your own stories out of it rather than sticking to the instructions and keeping the sets together, which I get the impression today's commercial emphasis on selling and building sets of things recognisable to kids through films is eroding a little.

"
"
If you've got small humans to keep occupied then for Christ's sake take them to see it
The family story works too, a bit more visible this time around, with Maya Rudolph now playing Finn's mother as an onscreen character, and you're able to invest a bit more in the humans now that they aren't just a reveal at the end. Now you know the human world is an extension of the Lego one, scenes where characters get stranded under the washing machine are invested with some peril, because there's real-world threat now you know there's a danger they're lost forever. I mean, not much of a threat because it's a bit of Lego, but you know what I mean.

Everything you want from a great children's film is here, by the way: if you've got small humans to keep occupied then for Christ's sake take them to see it, because they'll quite rightly think it's great. Whatever small level of disappointment I felt is down to the high bar set by the first, a desire for them to surprise me again which wasn't fulfilled and, honestly, the fact that I wasn't in a great mood going in. (Chris Pratt and Elizabeth Banks were charming and enthusiastic surprise guests at the screening to introduce it, and my main thought was "Oh great, this'll set us back 15 minutes.")

The older one will like it, as he would've done five years ago, but more so, because although there's a bit less to think about, there are two satisfying narratives going on at the same time, the parallels between which will be obvious to him. Over Christmas he showed me a thing he'd written and I realised he's developing the skill by doing exactly what I did at his age: ripping off other people's styles and writing his own stuff using them, learning form and structure by imitation. It's interesting to watch, and nice to think that one day he'll be complaining on the internet about how a film not aimed at him hasn't lived up to what he wanted, just as jaded and frustrated at his unfulfilled potential as I am.

More:  The Lego Movie 2  Lego  Chris Pratt  Elizabeth Banks  Will Arnett  Tiffany Haddish  Stephanie Beatriz  Alison Brie  Nick Offerman  Charlie Day  Maya Rudolph  Will Ferrell  Phil Lord  Christopher Miller
Follow us on Twitter @The_Shiznit for more fun features, film reviews and occasional commentary on what the best type of crisps are.
We are using Patreon to cover our hosting fees. So please consider chucking a few digital pennies our way by clicking on this link. Thanks!