Review: The Red Sea Diving Resort sinks under the weight of its own clichés 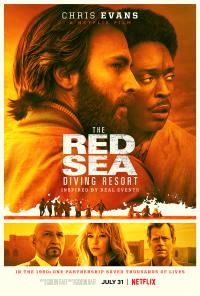 Is it still white saviour complex if the events actually happened? Or is it a different kind of white saviour complex; one for the benefit of white audiences, to make them feel better about conditions in other countries that probably had something to do with them sticking their oar in at some point in history? Are we challenging ourselves by broaching such subjects in the first place: a tacit acceptance of blame by not sugarcoating the human casualties of conflict? Was a film ostensibly about ethnic cleansing the right time to show off Chris Evans' side-ass and the top bit of his pubes? Many questions.


One part "fuck yeah let's hit the waves dude!", one part "yikes female genital mutilation, some countries are problematic eh?", The Red Sea Diving Resort is a flimsy oddity that flicks between tones like a haunted metronome. I guess there's nothing really wrong with that - sudden peril can be an exciting test of a character's ability to think quickly, something Indiana Jones would deal with five times before breakfast. But this is based on a real life story, and although an incredible tale, as entertainment it still requires careful crafting to gel the component pieces of culturally sensitive events into an authentically earnest whole.

Things get iffy pretty quickly. An opening sequence where Israeli Mossad agent Ari Levinson (Chris Evans) helps local hero Kabede Bimro (Michael K. Williams) deliver a group of Jewish Ethiopian refugees to safety, hotly pursued by the Sudanese army, highlights the dangers faced for being the wrong religion in a part of the world where that can get you killed. It's a dangerous game, and with missions becoming increasingly hairy Ari devises an improbable plan: rent an abandoned resort on the Sudanese coast, pose as a diving instructor, and use it as a front to smuggle out as many people as he can under the noses of the authorities. 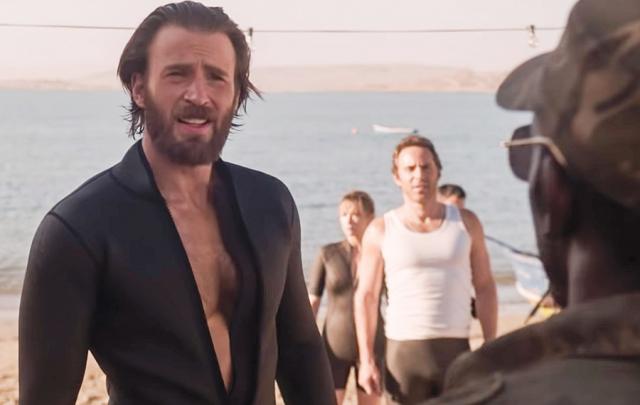 "Or maybe I can distract you by unzipping my top..."


But he can't do it alone. A fun Mission Impossible-esque sequence follows, where Ari gets the gang back together - the gang being a mishmash of seasoned spooks from around the globe, selected apparently for their witty banter. Except for Sammy Navon (Alessandro Nivola) who is the token cynic, poised to counter Ari's upbeat self-righteousness whenever the occasion calls. The team set to work and amazingly Ari's plan begins to bear fruit, with refugees soon filtering through the resort as guests check in unaware. It's so successful in fact that before long the agents find themselves having fun, and we're treated to a goofy montage set to Duran Duran's 'Hungry Like the Wolf'.

There are countless examples of 'white saviourism' in film and TV. That doesn't mean the stories shouldn't be told, just the angles need to be presented correctly to be fully representative of the parties with stakes in the game. Michael K. Williams' character is present throughout as the one single black character of note actively trying to help his people, but is nowhere to be seen during pivotal moments. A Sudanese army colonel is straight out of a parody sketch, the poor actor (Chris Chalk) left skidding on ice-thin characterisation. Not that the white folk fare any better in that department - it's remarkable how unessential the majority of a cast featuring half a dozen A-list names feels. 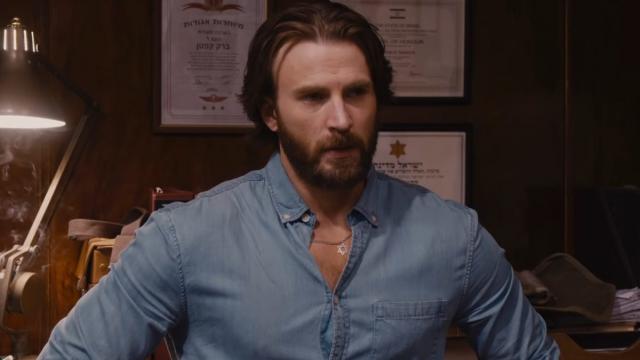 
So not great. Annoyingly, despite my quibbles, they pulled the rug out from under me with one of my favourite tropes: playing real life footage over the credits of what you assumed to be a liberally fictionalised movie. The locations and events portrayed are all pretty accurate (although apparently names were changed to make it more of a 'based on...'), and it's always hella cool to see actual real super secret spy footage, especially from the '80s with that grainy fuzz the bleeding edge photography technology of the time allowed. I'm not sure what it says that my favourite part of a film were the end credits, though.

Curiously, writer-director Gideon Raff has another real-life Israeli-set spy series on Netflix at the moment - aptly named The Spy - which stars Sacha Baron Cohen in the main role. I scoffed at first, as with his suit and pencil-thin moustache Cohen looks identical to his comic creation Borat, but he does well to break out of the mould, proving Raff is capable of gelling unlikely actors with compelling narratives and hitting a consistent, non-baffling tone. Why Netflix has suddenly put out several high profile shows sympathetic to Israel is another issue and I'm going to stop typing now.