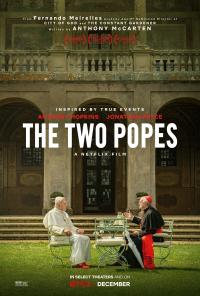 They're just two normal fellas, these guys. Sure they live in gigantic palaces and take part in rituals affecting the lives of millions of people based on doctrines written hundreds of years ago in the belief a giant bearded ghost man watches everything you do in the bathroom, but they like a pint just like you and I. Who cares if you're expected to bow and kiss their ring to show respect else you'll go to hell if they like to watch the big match? They're just two normal fellas. Two normal fellas in charge of a 2000-year-old nonce festival.


My tolerance of religion comes in ebbs and flows. There's no doubt faith has led to a great many things that have bettered humanity, but then I remember about the extremists who take non-conformity to their special set of made-up rules a bit too far and ruin it for everyone. Also the paedophilia. In the West Christianity and Catholicism are seen as the default religions, entrenched by a few thousand years of persecution, galvanised by strong ties to monarchies, governments and financial institutions. It's a complicated situation to unpick when laws and traditions the non-religious abide by are so closely tied to personal beliefs.

But what if you weren't just a follower; what if you were the head honcho, able to set in motion changes that could shape your faith, and therefore the world as a whole? Would you carry on as things are purely because that's the way things have always been, keeping your fanbase happy and probably not having to do any admin? Or do you take a look at our fast-paced world and acknowledge things have moved on slightly in the last few millennia, before pledging to keep up with the monkeybrained urges of a species that can now shout "tits" at a bit of plastic and pictures of tits appear? 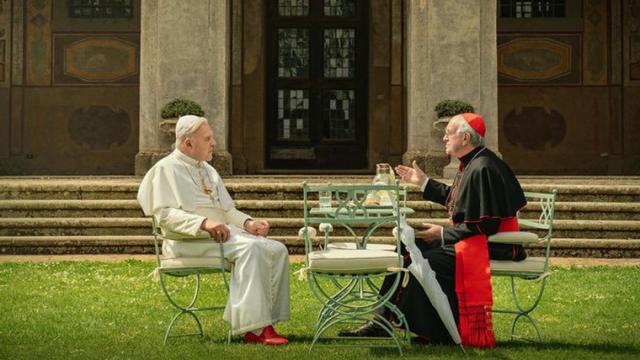 
In 2005 The Catholic Church found itself at a crossroads. Following the death of Pope John Paul II, two frontrunners emerged as possible wearers of the pope hat: conservative traditionalist Joseph Ratzinger, and liberal reformist Jorge Bergoglio. A vote was held, the famous white smoke rose from a chimney atop the Sistine Chapel, and Ratzinger was declared the victor - going on to style himself Pope Benedict XVI. This event, and the following decade of finance and abuse scandals which led to Ratzinger stepping down so Bergoglio could replace him, is the ground covered in The Two Popes.

Sounds like a recipe for fun, right? I'm being sarcastic, but this is mostly where director Fernando Meirelles leads us. The Two Popes is a predominantly light-hearted examination of the personalities and politics involved in ascending to Popedom - even daring to poke at the absurdity. The Joe and Jorge splashed from broad brush strokes (portrayed by Anthony Hopkins and Jonathan Pryce respectively) make an entertainingly bickery double act. The source of this disharmony? Jorge wants out.

Dismayed by the Church's decision, and unable to get a reply from the Vatican's HR department, Bergoglio travels to Rome to hand in his notice in person. Except His Holiness isn't having it, and the pair end up enduring a sort of fiery brief holiday bromance - bonding over their duties, responsibilities, futures, even favourite TV shows and music, in a way only God's top two representatives on Earth could ever fully understand. It's a sort of Best Of... of holy philosophy. As such the chats do feel a little contrived, being condensed versions of religious and social ideals and dilemmas. 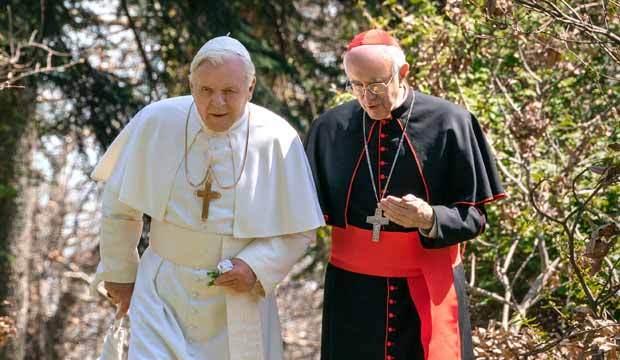 
Where the film pains itself is in showing the human side of these two unique individuals. We see Bergoglio's humble beginnings and learn of a few regrets that have forged his path, while Ratzinger is depicted as solemnly questioning his faith when pushed on his own failings - although this particular scene did elicit some groans when, during a Hopkins' Thousand-Yard Stare MegaAct TM, Jorge steps up to (spoiler) forgive him. And then we're all smiles again, and we forget about the abuse.

One question I keep coming back to is: why tell this story? Joe and Jorge do have a unique position, but the debates they have are basic at best, and always come with the miraculous get out clause of forgiveness. So while brave of Meirelles and screenwriter Anthony McCarten to touch on some of the controversial issues that have dogged the church for many years, it's never long before we return to levity - which does often feel like an over-zealous attempt to ingratiate the pair to us, rather than deliver something meaningful. You're not going to get me, The Pope.

More:  Anthony Hopkins  Jonathan Pryce  Fernando Meirelles  Anthony McCarten  Netflix
Follow us on Twitter @The_Shiznit for more fun features, film reviews and occasional commentary on what the best type of crisps are.
We are using Patreon to cover our hosting fees. So please consider chucking a few digital pennies our way by clicking on this link. Thanks!