Review: The Wandering Earth seeks to save the planet but rings hollow 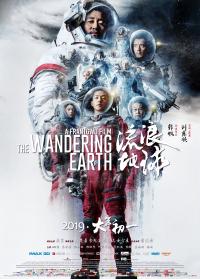 Think of the most outlandish thing you can think of. Now imagine it bigger. No, bigger than that. Think the Wright Brothers diving into the Trench Run. Bigger. Think Nikola Tesla wielding Mjolnir in a duel with Edison. Bigger! Elon Musk smoking weed on Mars in a mech. Bigger still, dammit! Ok, now take whatever mental image you've arrived at and multiply it by ten, then run into a wall to give yourself a concussion. Congratulations you are now somewhere close to the wild, inspirational, childish ambition of The Wandering Earth.


I love the phrase "childish ambition". It denotes an idea or plan far removed from rational adult thinking, yet when put into action is so extravagantly impressive you can't help but be in awe of the child-like brain that thought it up. When such a plan fails, you put it down to the slim chance of the plan succeeding in the first place - it was probably a last resort anyway and besides, the schematics were drawn in crayon. But when it somehow works out, it can seem like the only thing that would have made sense all along, standing as a testament to the human ability to persevere despite overwhelming odds.

In The Wandering Earth - a Chinese production adapted from a Hugo Award-winning novel by author Liu Cixin - we find the Earth under threat from a cosmic event due to wipe out life in our solar system. Such an existential crisis calls for extreme measures, and with the fate of the planet at stake the world's greatest scientific minds come up with a plan to ensure the survival of the human species: build 10,000 (TEN THOUSAND) volcano-sized thrusters on the surface of the planet and fly the entire thing to our nearest neighbouring solar system, Alpha Centauri. Right.

There is some CGI


But taking the planet for a spin is merely some light backstory. The main events of The Wandering Earth take place well after we've begun our exodus, with the formation of a United Earth Government pooling all our resources, and the majority of the human race now living underground due to the surface becoming a frozen wasteland. This is where we find Liu Qi (Qu Chuxiao) and Han Duoduo (Zhao Jinmai), a pair of unruly siblings who abscond to the surface on a jolly - just in time for unforeseen circumstances in the form of a gravitational spike from Jupiter knocking the thrusters offline, setting the two planets on a collision course.

Liu, Han, and a bunch of other people they stumble upon find themselves in a unique position to be able to stop that from happening, which mostly involves surviving gravity quakes and driving bits of energy cores from A-to-B like a videogame from 2003. It's a try-or-die kind of situation ripe for soul-searching and last-gasp acts of sacrifice, of which there are plenty. Did I mention the big rotating space station? There's one of those too. Also a man shoots a gun at space. There's a lot going on is what I'm trying to say.

A pretty, uh, "imaginative" setup eh? (*mimes toking huge bong*) As far as allegories for environmental disasters bringing our species together go, the looming prospect of the Earth smashing uncontrollably into another planet is a little on the nose. But science fiction is meant for exploring the human condition through wacky ideas stretched to extremes, and peering into the corners to see what emerges. So then, for all the far-out notions of random planetary cataclysms, why do the human interactions feel so formulaic? 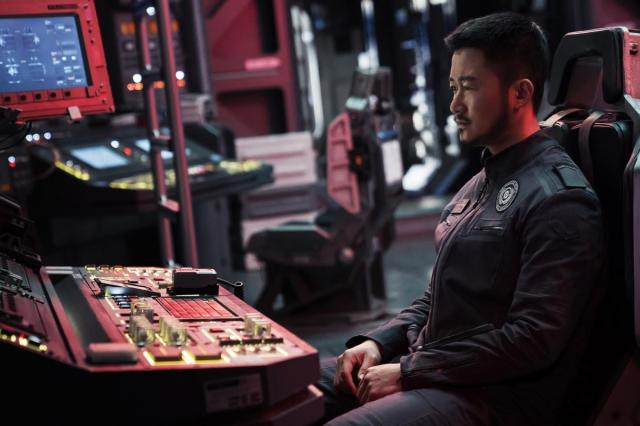 
The Wandering Earth was made by a Chinese state-run film production company. That's not to belittle any creative achievements, but when you start to dig into the production history it becomes clear the film exists to showcase the ability of China as a nation to produce blockbusters on a level with their Western counterparts. There are hundreds of great Chinese films, but the agenda is different when the government itself is pulling the strings. Sure there's something noble about ingraining messages about preserving the planet for future generations into youth culture, but I'd argue there's more worth in doing this via films about Chinese culture than trying to emulate dribble like 2012 or Armageddon.

The film's Wikipedia page boasts of the work poured into pre-production by a small army of concept artists and story checkers - apparently the film differs from the book's beats considerably, with a whole conspiratorial aspect removed. It's not so much Design by Focus Group as Design by State, and the results show in the bland mish-mash of moral guidance and simplistic redemption arcs in the final product. Effort doesn't automatically translate to movie magic, and there's a small irony in the film being symbolic of the 'go big or go home' attitude that runs parallel to the efforts of the humans in the film itself.

All that said, The Wandering Earth isn't a bad film at all if you want to kill a few hours wondering what is going to explode next - it's just hampered by an overly-rigid and predictable structure. The effects are great if you're impressed by that sort of thing, and it took $700 million during its theatrical run if you like comparing how many billions, but when it comes to actual human interest things are thin on the ground.

More:  The Wandering Earth  Frant Gwo  Qu Chuxiao  Li Guangjie  Ng Man-tat  Zhao Jinmai  Wu Jing  Qu Jingjing  Sci-fi  Disaster Movie  Space  Netflix
Follow us on Twitter @The_Shiznit for more fun features, film reviews and occasional commentary on what the best type of crisps are.
We are using Patreon to cover our hosting fees. So please consider chucking a few digital pennies our way by clicking on this link. Thanks!