Review: The Witcher is the fantasy bobbins you never knew you needed

"Cheap. Fast. Good. Pick two." So goes that old maxim of the creative world. I guess what they didn't mean was "pick two things and bludgeon them into the triangle of choice with the nearest rock while screaming at it to make sense" - the two things in the case of Netflix's adaptation of The Witcher being a hollowed out Game of Thrones where we're parachuted into the lore with no explanation and left to fend for ourselves, and blinkered '90s after-school spellcasting greenscreen of death Knightmare. The result being a foul-mouthed mess that somehow defies all cynical attempts to bring it down.


It makes no sense. The Witcher is good... isn't it? I mean, it is. Yes. I'm sure of it. But how? It's got everything going against it: basic and slightly derivative dialogue, ropey CGI, rubber mask monsters that are a bit too rubbery, an overall air of cheapness, that flipping wig. If you told me the costumes were stitched together for a primary school nativity play then I'd have to check. Yet. Despite debilitating qualities that would sink any other show, The Witcher knows exactly what it is and does not give one single fuck - ironic, given a lot of the time that's all you'll get out of our permanently disgruntled hero, Geralt (played by Henry Cavill with a level of gameness that would leave Hugh Jackman shaking his head).

Ahh, Geralt of Rivia. Trained in the art of combat magic, cursed by mutation to live a long life, going from town to town solving problems and in the process hoping to earn enough coin to pay off his brothel debts. Geralt is a walking wall of common sense; if a demon is pestering your village there's a good chance somewhere in his storied past he's either seen it, bargained with it, killed and/or eaten it, or unmasked it as a disgruntled local before - so is the ideal arbiter for a 60-minute Quest of the Week TV show. Geralt's key trait is that he cares not for the petty squabbles of mortal folk. Or so he claims. For despite his buff protestations and surly demeanour, Geralt always seems to let his guard down. 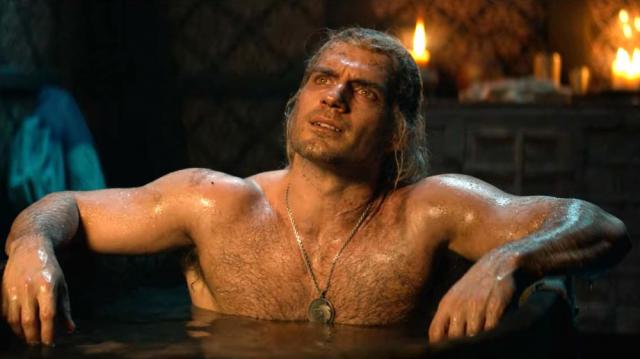 And take his top off


This is how he comes to be involved with the rookie sorceress Yennefer (Anya Chalotra), similarly cursed/gifted with magic powers, and travelling bard Jaskier (Joey Batey), who looks like he could break into Wonderwall at any given moment and as such retains a deliciously punchable mug. The series follows the various beginnings and fates of our heroes across several timelines - which is initially confusing seeing characters meet for the first time after they've already seen action together, sometimes years ahead - but as the timelines converge things begin to make more sense. Threaded throughout this is the plight of child princess Ciri (Freya Allan) - on the run from an evil army, the only thing she knows for certain is that her destiny lies with Geralt.

At only eight episodes it's a lot of ground to cover - a bit more breathing room for plot and side quests would have been nice. The show works best when it's at its most Xena: venturing into the nearest woods, camera and costumed stars in tow, to tell a simple good vs evil story with the odd trampette somersault. The ideal fantasy format for The Witcher would have been a 22-episode season in this vein, allowing more room for weird beasts, bottle episodes - hell, chuck in a Halloween special, main story arc be damned. But when you're going from vista shots with a big fake castle in the background, to Geralt and co. scrabbling through some bushes, you get the feeling we're lucky to get what we got. 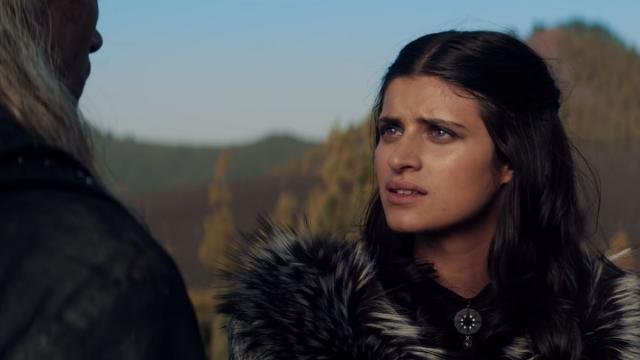 There's a Lidl distribution centre just out of shot


Speaking of getting some; there is a lot of sex and nudity in The Witcher. Unfortunately for anyone tuning in hoping to get a glimpse of Henry Cavill's naked penis, balls, bum, scrotum, or other search engine-baiting terms, the closest they come is a bit of hairy upper inner thigh. I've always thought in the interests of equality there should be some accepted nudity gauge: one inch of peen for every boob, something like that. I just want everyone to be happy. The careful obscuring of male nudity in this show and overexposure of female characters does feel like pandering in that grimy, disappointing way typical of the genre. So sorry about that, thought you should know before heading in. Anyway.

The Witcher is an ambitious adaptation of the games and books (I've played the games but not read Andrzej Sapkowski's novels - apparently this is based on a series of short stories which act as a prequel), that makes no apologies for dumping you in the deep end. Which would only really be a problem if we weren't living in a post-Game of Thrones world. We're all attuned to these fantasy things by now, with their quirky ways. The flip side to this is The Witcher has an impossible task keeping up with a show clearly on another level budget-wise, making every wonky effects shot look poor in comparison. Let that expectation go though and you'll find a fun, frothy adventure serial with an unexpectedly deep level of humanity, and swagger to spare.

More:  Henry Cavill  Freya Allan  Eamon Farren  Anya Chalotra  Joey Batey  MyAnna Buring  Lauren Schmidt Hissrich  Andrzej Sapkowski
Follow us on Twitter @The_Shiznit for more fun features, film reviews and occasional commentary on what the best type of crisps are.
We are using Patreon to cover our hosting fees. So please consider chucking a few digital pennies our way by clicking on this link. Thanks!