Review: Too Old To Die Young wallows in neon-soaked misery 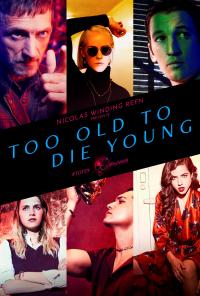 "It's been 84 years..."
I gaze out upon the tundra, the sun slipping over the horizon as a bitter wind blasts ice shards across the landscape. I'm reminded of the seasons which have preceded me in the days, weeks and months now consigned to the past, and of the brave men and women who have made the ultimate sacrifice on this arduous journey, of which I am the sole remaining survivor. We lost our captain early, driven mad by the unerring stillness. Five crew perished recovering a password. The first mate ventured outside searching for spare HDMI cables some days ago, never to return. But I write this final entry with a note of triumph in my heart - final, because once my frost-bitten hands have rested my pen I too shall be taking a stroll into the darkness, but not before making one last entry: I did it. I finished watching Nicolas Winding Refn's Amazon Prime Original series Too Old to Die Young.


There are two possible reactions to the works of Nicolas Winding Refn: 1) looking to the sky and praising whatever God you revere that such a divine composition of light and sound could have filtered its way through a camera, all the way to your TV set, and into your eyes and ears via the miracle of technology, validating every thought you ever had about the power of art and science, 2) making raspberry noises and wanker hand motions. The divisiveness caused by Refn is probably down to Refn himself - born colourblind, his vision in all senses was always going to be unique, literally due to the way he sees the world. The question then becomes should he be expected to step out of his comfort zone to please us, or stick to his creative instincts?

Refn's exclusive series for Amazon Prime, Too Old To Die Young, is typical of his previous output: meticulously composed scenes of people sitting still under various shades of neon light contemplating their actions, before suddenly springing into life. Or not doing anything at all. It does keep you guessing. Or not, if your eyes are too busy rolling to see the screen. The men are complex dirtbags, the darkness seeping from a well within their souls. The women are set dressing, existing to pout and expose cleavage and lay suggestively and other such grim unimaginative wank fantasy things. Everyone is miserable. 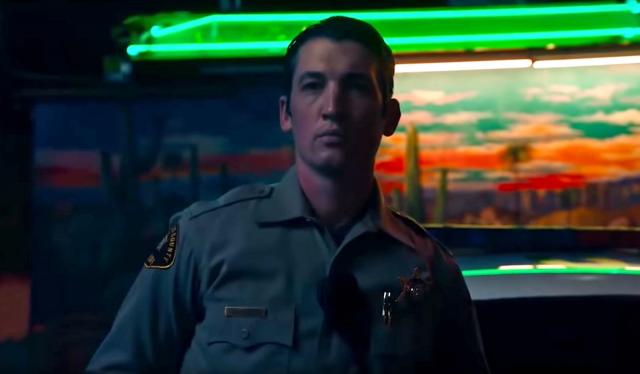 It's all about as deep as a plate, but a decorative one your nan would have stood upright on the mantel next to some chintzy teacups. As you'd expect, crime is the order of the day. The first of ten mostly feature-length episodes sees Miles Teller playing sleazy cop Martin Jones, seeking revenge for his fallen partner and accidentally becoming drawn into a mob underworld. This is followed by a trip down to Mexico to witness the death of an old way of cartel life and the birth of a new one, creating a precarious situation ready to rumble out of control as paths cross and long-standing revenges resurface.

Teller is his usual constant self; a bedrock onto which his bemusement is carved. I've tried to imagine his expression when uber-braggart Jeffrey Wells shouted "hey, Whiplash!" at him on an escalator, but all I get is Teller turning slowly and his face is the :-| emoji, nullifying Wells' attempt to get a rise (which he'd later embellish to make himself the hero anyway, probably). I'd say his role as a possible psychopath/sociopath and confirmed paedophile takes some expert chops to portray with the delicacy required, but honestly it's hard to tell. He's definitely a scumbag though. And also the closest thing we have to someone to root for.

If all of this is sounding like a chore so far, then I can't say I disagree. There are plenty of crime shows about that drop you into the scuzzy badlands: Breaking Bad has situations built on darkly comic wish fulfilment; Narcos corrupts the good and bad - both position criminals as anti-authoritarian folk heroes. There is a moral course correction late in the series, with the revelation Martin and a fellow hitman have been taking out paedophiles. Of course Martin is one himself, causing some introspective panic as he struggles with justifying his actions while drifting along in a haze of angst. But mostly it comes across as fetishism on the part of the writers - more so when you factor in Billy Baldwin's bizarre dad figure, who goes full Epstein-creep. 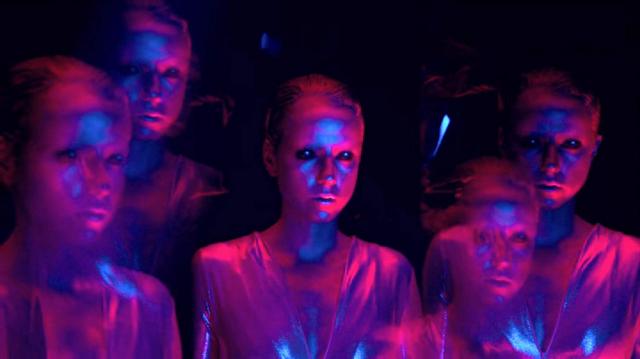 The light relief, as such, comes in the form of freshly crowned cartel royalty Jesus Rojas (Augusto Aguilera) and Yaritza (Christina Rodlo). Jesus and Yaritza love killing, inflicting pain and sex - often combining one or all of those things at once. In a hint at a supernatural element - which we'll come back to - Jesus also believes Yaritza to be the reincarnation of his murdered mother. It's a complicated relationship but they're making it work. In fact Yaritza is a secret assassin who calls herself The High Priestess of Death, working her way through the ranks of the cartel and leaving a trail of dead foot soldiers behind her. Is she good? Is she bad? Is she something else?

The term 'Lynchian' is over-used these days, but Refn has had a good stab at layering in an underlying current of surreal menace, positioning Martin's world a sidestep away from Twin Peaks - although it's more of the scrub-at-skin feeling of Fire Walk With Me than the slapstick antics of Officer Andy. It's heavily hinted that Martin's enforced righteous killstreak is at the behest of a psychic cabal anticipating some upheaval in the balance of world power. Martin is either a useful puppet or a symbol of atonement. Such symbolism sprinkled throughout hints again at spiritual or supernatural involvement. Whether this is all surface, and how this relates to Yaritza's mission, remains - in true Peaks fashion - frustratingly unanswered. But it's more fun that way, right?

So yeah, the length. It's not the episode duration that's the problem, but how little happens and for how long in each 60-80 minute instalment. The locked down cameras, background actors leaning against walls for minutes at a time, even the absence of dust particles falling through the carefully directed light beams - it's so crisp, as if time is standing still, and you certainly feel it. I've never seen anyone so keen to get a mention on the OnePerfectShot Twitter acccount. While it's true you could take any frame and gush over the remarkable composition, it's also at odds with the purpose of cameras: to record movement. We were meant to capture more detail as the technology improved, not use it to create some uncanny version of reality where people are mannequins. 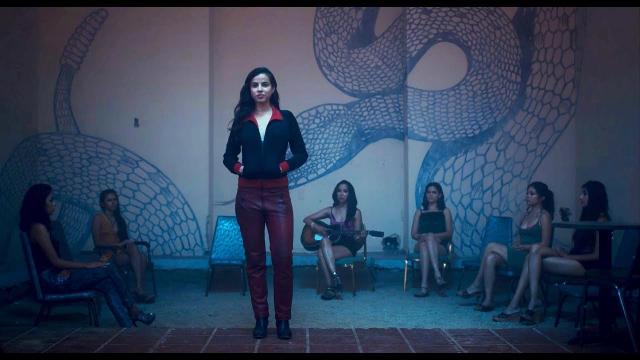 I always wonder what actors get out of this sort of filmmaking: barely moving as the camera records away. Is it doing more of an acting job that they're getting the scene across with a minimum of movement? I never got Paul Thomas Anderson - a director with an equally obsessive eye for framing a scene - until he had Joaquin Phoenix explore every corner of the screen in Inherent Vice. For all my years of film-watching it was a minor revelation about the purpose of an actor in a setting. The guy was practically walking up the walls. To see the exact opposite now feels wasteful. But it's a very deliberate creative choice, and one Refn is fully in control of.

With the talk these last few weeks of Marvel Studios and their Happy Meal production line, it's heartening - daring almost - to see a director given complete free reign. That said director used the freedom to make a plodding show about a paedo hitman featuring a bunch of self-indulgent pop culture cameos is... probably not what Amazon were hoping for. Evidently so too, as despite the door being left tantalisingly open for further episodes to dig deeper into the show's lore (and it is a show, get your head out your arse) there are reportedly no plans for a second season. Which is a shame - for all the problematic material, and temptation to lump this in with Lynch's return to Twin Peaks, Too Old to Die Young does maintain a uniquely weird space for surprises to jump out from the precisely angled shadows.