Review: Triple Frontier is quite literally a miserable slog 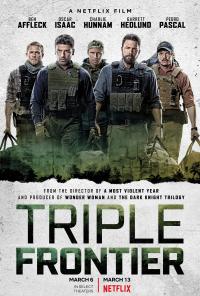 Grrr, men! All muscles and sweat, guns 'n' grit, sports and spunk. But sometimes emotions too. Manly men, rappelling from helicopters, growing a beard. Laying our souls bare to one another in a series of grunts. Real men can communicate using open palm hand gestures to navigate through the streets of life son. Drop and give me fifty no-scopes. Men are complicated contradictions: chiselled yet indefinable; poets and filthy bog creatures; an army of one yet no man is an army. Caps. The only thing that can understand a real man is an even more realer man. Grr! Bloody men!!


A lot happens in Triple Frontier but hardly any of it is exciting, interesting or original. The plot lumbers along like a bear disturbed from hibernation trying to find a hole to shit in, before deciding to let everything tumble out where it stands. I guess the idea was to peer deep into the souls of men torn between ideals and loyalties, and see if something primal stares back - a hark to those boys-only action flicks of the 70s & 80s. But those films had a pulsing tactile nuance that came from a mix of strong characterisation, actual danger due to production challenges, and actors capable of making you believe they were being put through the grinder. They breathed musk.

The five leads - Ben Affleck, Oscar Isaac, Pedro Pascal, Charlie Hunnam and Garrett Hedlund - are generally likeable in most other things, but here have the chemistry of a sack of potatoes, and character-wise are about as indistinguishable. Which is handy because it's going to save me several paragraphs trying to describe them all. They do have cool army nicknames though, like 'Dropzone' and 'AK-Forty-Steven' but I can't remember what any of them actually were, or what their actual character names were come to think of it, sorry. 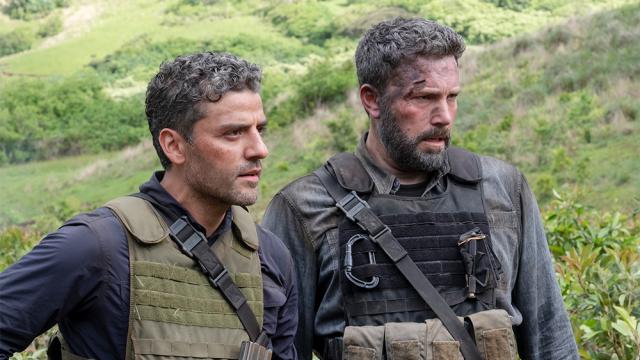 
Isaac is the ringleader, rounding up his ex-forces bros for One Final Mission: assassinating a cartel leader and making off with as much of his ill-gotten cash as they can carry, freeing the locals from tyranny in the process. Affleck is the brains of the operation and the most distinctive of the Men, pining for an estranged family when the occasion calls for a reminder of Why He's Doing This. Pascal can fly planes and helicopters, and wears a hat. The other two are brothers and are, uh, there? One of them has a different kind of hat.

Naturally everything goes wrong the instant Isaac and co roll up, managing to bungle the hit and crash an escape chopper (you had one job Pascal!), presumably costing them their stealth bonus. This leads to a set of sequences that are part-survival, part-determination, as the gang attempt to lug their haul over a nearby mountain range to the coast. There's a stab at moral grey areas to keep things ticking over - a misunderstanding with native farmers leads to a fatal confrontation and some more staring into the distance. Ultimately the lads decide it was justifiable self defence and go on their way. And that just about sets the tone for everything that follows.

Why the long face, etc.


At a stretch I'd say all this was a comment on US foreign military policy - freeing oppressed people by invading cocksure into lands unwanted with the latest death machines, only to end up inevitably causing more destruction as you shoot your way out. This is either a knowing acknowledgement by screenwriters Boal and Chandor of America's legacy in the Middle East, or a disgusting excusing of what happens when you put your nose where it's not wanted. All depends on how much of a hard-on you have for guns and shooting foreigners, I suppose. Boal and executive producer Kathryn Bigelow (who was originally set to direct) have made enough of these perils-of-being-an-army-man films to know what they're doing.

Being a Netflix release I was able to go on my phone without anyone tutting, so ended up on the Triple Frontier Wikipedia page. Apparently at various points Tom Hanks, Johnny Depp, Will Smith, Mahershala Ali, Mark Wahlberg, Tom Hardy and Channing Tatum were all up for roles, and I can't help but imagine how fascinating any of those combinations would have been. Hanks and Depp, ripped and topless! The Fresh Prince and Marky Mark - the rap soundtrack along would have been worth the price of admission! As it stands we have an ensemble who look like they just wanted to get things over with for the day and head back to their Premier Inn, and the experience for us is about as palpable as that sounds.

More:  Mark Boal  J C Chandor  Ben Affleck  Oscar Isaac  Pedro Pascal  Charlie Hunnam  Garrett Hedlund  Adria Arjona  Netflix
Follow us on Twitter @The_Shiznit for more fun features, film reviews and occasional commentary on what the best type of crisps are.
We are using Patreon to cover our hosting fees. So please consider chucking a few digital pennies our way by clicking on this link. Thanks!