Review: Uncut Gems is an anxiety attack in film form 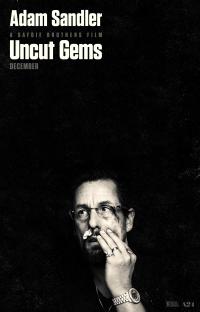 What's the worst lie you've ever told? Let me rephrase that: what's the worst lie you've ever told and got away with? Congratulations! From the synapses snapping away to bring your consciousness to life, to the cells in the blood pumped around your veins, to the atoms in your DNA, and all the stardust delivered on a rock from a galaxy far, far away embedded in your primeval history, that deception is now a part of what makes you uniquely you. So was it worth it?


Uncut Gems is an absolute waking nightmare that left me reeling, but in a fun way. A funmare!?? Haha! :teeth: Adam Sandler, in his trademark once-a-decade serious role, plays Howard Ratner, a Manhattan luxury goods trader on the hunt for his next big score. Howard's methods include selling items he doesn't own, for money that isn't his, and bending the truth to make things square up, which usually also involves lots of pathetic begging. His vices are sports, women, gambling, more women, and more gambling. But it's not all bad news: he loves his wife and children.

Howard is a man trapped in his own web of deceit, and there's a tornado of piss bearing down. Yet somehow he'll always find a way to make the situation worse for everyone. That's largely what happens for the best part of two intense hours in The Safdie Brother's new Netflix film, which sees Howard fall foul of gangsters, sharks, hustlers - but mostly of himself - as he makes a series of gambits all over town in a race against time to un-fuck a situation of his own fucking. Imagine Del Boy x Tony Hawk. Dave Mirra's Freestyle CEX. You get the idea. 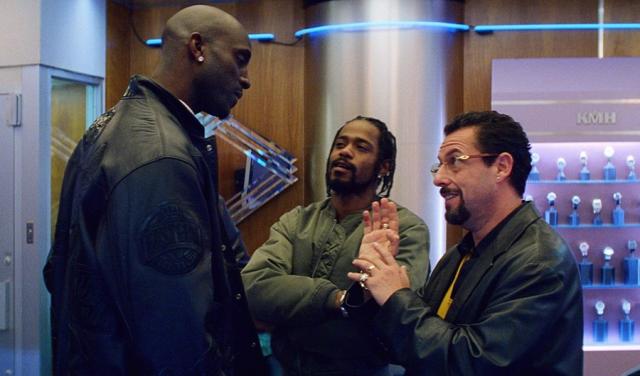 
Our participation in this is to shake our fists and heads as we watch the wheels slowly and inevitably come off Howard's deals - the only thing keeping him alive being a million dollar opal sourced from an Ethiopian mine, that emits an energy so powerful anybody who gazes into its black heart swears the universe has gazed back at them. It's proper monkey paw stuff. But Uncut Gems only bookends Howard's story with a vague cosmic connection, leaving room for interpretation over whether there are any mystical life lessons to be inferred, or if Howard is simply a selfish oaf having the best and worst week of his life simultaneously.

Adding to the chaos is a discordant score composed (by Daniel Lopatin) of classical instrumentation and brash synth moans: part aspiration, part a pain in the ears. Very apt for an obliviously trashy character such as Howard, if a headache for us with the constant underlying hum. It's striking how much Uncut Gems always sounds like there's a lot going on - chatter and shouting, glass smashing, machinery whirring. It's a noisy film, and combined with the quick dialogue and a ferocious pace, the overall sensation is like watching a rottweiler pulling on a leash at a duck pond as the threads begin to fray. Fortunately The Safdies are fully in control of proceedings, expertly wringing every drop of moisture out of your body as sweat by giving Howard just enough to think his ship has come in, before dashing it on the rocks.

tfw your gems are uncut


But why care about Howard you may ask? Firstly, being a total berk, Howard has managed to upset a terrifying henchman named Phil (Keith Williams Richards in his first acting role, and who was reportedly discovered on the subway - how do you even initiate that conversation: "Excuse me, you look like you could crush a kitten with your eyes"?), who would think nothing of killing Howard's family and tells him as much. So their fate lies with Howard's actions. Secondly - somehow - Howard is a likeable figure. Sure he cheats and lies, which can't be forgiven, but he overcomes this with a can-do attitude that he convinces us we wished we had. I'm not even sure how I feel about that, but things are so fucked up in the air by the point Howard makes his grand "this is how I win" speech you may have seen memed, it doesn't even matter - just go with his enthusiasm and certainty he can fix everything, which I suppose is the fatal flaw in Howard himself. So, er, maybe don't do that.

So then why watch a film you know is going to induce a panic attack in the first place? It's not like a gross-out comedy where we squeal in our seats, or a horror where we know something spooky is going to pop up every five minutes and we laugh at ourselves for being silly. Uncut Gems is actively trying to take years off your life. With everything you know about the film, to go in now would be self-flaggelation. A scene towards the end where Eric Bogosian (as Howard's brother-in-law, Arno) goes through a series of tortured expressions ranging from happy to distraught, to relieved, to drained, is a microcosm of the entire film, and will leave you haunted when the roulette wheel falls on a final, critical gamble. Jesus fucking CHRIST I can see his face now. Are The Safdie Brothers gambling that we hate ourselves enough to willingly watch? Possibly. Do yourself some damage and go see this film.