Review: Us is an iconic horror that doppelgängs up on our innate fears 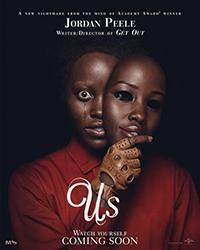 Of all the books I read while studying English Literature at university, there are very few that I can say really stuck with me so much that I think about them on a near-daily basis. One that did is a short story by Edgar Allan Poe called William Wilson. If you’re not familiar, it’s a deeply sinister tale in which the narrator describes being tormented throughout his life by infrequent run ins with his doppelgänger, a figure that looks, acts and dresses exactly the same as him, until he is eventually driven mad. The story struck a chord mainly because my professor made a compelling case at the time for how this horror works on a psychological level, but also because he had us analyse the many thematic instances of ‘doubles’ throughout the text. This, he explained, includes William Wilson’s own alliterative initials, which are made up of two 'W's or, rather, 'double-you's. And it was at that point that I thought he was just really reaching.


The psychology makes sense to me though. The argument he made then was that mankind’s most primal fear isn’t loss of life, but actually loss of identity. The thought of a doppelgänger who not only has your appearance, but your mannerisms, your birthday, your life somewhere else in the world is horribly unsettling because it immediately undermines the foundation upon which everything you have ever perceived is based: that you are an original. At an individual level, it is the most deeply unnatural idea imaginable. 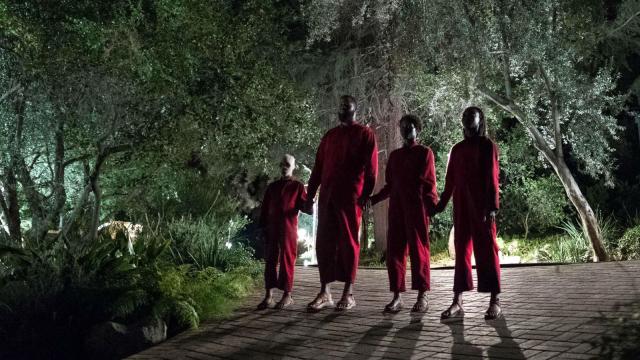 And then imagine if that idea... HELD HANDS.


That there might be an exact duplicate of you, whether by coincidence or by design, is a core-shaking thought, and it’s one that has obviously been put to use in other movies, such as Denis Villeneuve’s Enemy, Richard Ayoade’s The Double and, perhaps most horrifyingly of all, Nancy Meyers’ The Parent Trap. And now Jordan Peele, in presenting a story of a family terrorised by their own exact doubles, doesn’t just tap into that same innate phobia, but breaks down its door and sets it on fire. There’s blood and gore and plenty of laughs along the way, but trembling under the surface of it all is an unnerving chill.

"
"
The contrast between these two characters is the film’s most astounding special effect
It has to be said that for all the intrigue in the premise and Peele’s lingering creep with the camera, the most disturbing moments come from Lupita N’yongo knowing exactly how to be utterly fucking terrifying. Her lead role is as Adelaide, wife of Winston Duke’s Gabe, mother to children Zora and Jason, and clear harbourer of a dark secret connected to the beach that the family are visiting. Her other role, though, is as Adelaide’s mysterious double, 'Red', who moves around the room like a mechanical figure popping out of a murderous Swiss clock, all while delicately clutching a large pair of scissors. When she speaks, it’s in a hoarse whisper, as though mimicking human communication she has previously only observed, croaking out each word like she’s expelling a life force that doesn’t belong to her. The contrast between these two characters is the film’s most astounding special effect, and, as Red, N’yongo has become the new face of human horror; a monster in her actions, a soulless vessel in her interactions. 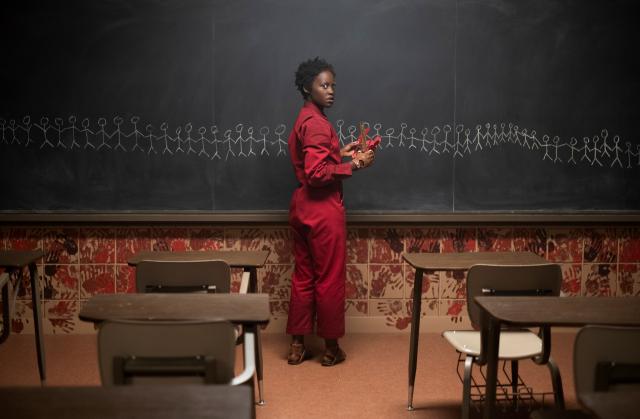 
It doesn’t help that, while Duke’s double is more grunting thug than unearthly evil, the children’s respective doppelgängers are vicious animals. Zora’s is a whiplashed psychopath with slicked hair, sunken eyes and a wicked smile, and Jason’s is a ferocious, gimp-masked puppy obsessed with fire. It turns out that those waiting for Peele to skewer another sector of social privilege with cutting subtext are wasting their time, because this film lives, dies and fiercely survives mostly on its characterisation and the cast’s remarkable performances.

"
"
This is the stuff that makes for truly indelible horror
That’s not to say that Peele doesn’t take all of the credit for harnessing all of the elements here though. This follow-up to Get Out may not seem as worthy for focusing less on social commentary and instead ramping up the dread, but there are choices made that show off Peele’s directorial talent and help to confirm his own filmmaking brand. Just like Get Out, there’s a through-line of humour that focuses on the relatable in the midst of the sinister, meanwhile this film’s visual identity actually ups the quotient of iconic shots from its predecessor. For every 'man sprinting wide-eyed towards the camera before veering off to the side', there’s at least three 'masked, silent child rhythmically clicking his fingers in front of a burning car'. This is the stuff that makes for truly indelible horror. 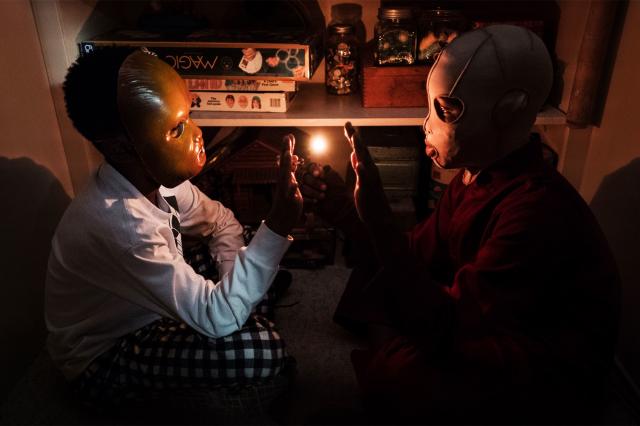 Masks, the best way to save money on split-screen effects.


As the concept unravels and revelations are made, Peele works to a resolution that is satisfying in providing just enough explanation for the existence of the film’s antagonists while adding extra layers of mythology on top. Either way, this a film that is going to reward repeat viewings like no other as spotting the thematic relevance of particular scenes can easily become a new viewalong experience. From the presence of twins, to characters saying the same words and jinxing each other, to the biblical reference of Jeremiah 11:11, maybe it’s my old English Lit professor’s lessons lingering in my head, but there are a ton of fun instances of doubling in Us. Or should that be 'U's… as in 'you's?

More:  Us  Jordan Peele  Lupita Nyongo  Winston Duke  Elisabeth Moss
Follow us on Twitter @The_Shiznit for more fun features, film reviews and occasional commentary on what the best type of crisps are.
We are using Patreon to cover our hosting fees. So please consider chucking a few digital pennies our way by clicking on this link. Thanks!