Review: Weathering With You is a big warm hug coming in from the east 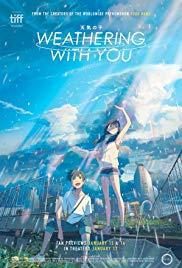 Three years ago, Makoto Shinkai’s wondrous debut Your Name was the 19th reason why 2016 didn’t totally suck. Life’s not really improved much since then, but at least the Japanese director has returned with a meteorological meet-cute that builds on what was so lovely about his first feature, and also crafts its own unique identity. As in Your Name, two teens come together against the backdrop of a natural disaster, and then have to contend with destiny conspiring to pull them apart, come rain or shine.


Our couple against the odds this time around are teen runaway who falls for a bright and spirited girl who possesses an uncanny knack of being able to control the weather. Hodaka (Kotaro Daigo) has fled his isolated island home for Tokyo in the summertime, except that it’s been belting it down for weeks. Hungry and taking cover from the constant storm, he meets Hina (Nana Mori), a McDonald’s employee who is supporting herself and her younger brother, who takes pity on Hodaka by giving him his first meal in days. Unlike the bright metropolis seen in Your Name, this is the unforgiving seedy side of Tokyo and Shinkai doesn’t shy from its grimness. It’s outside the Maccy D’s that Hodaka finds a gun, which he then later uses to threaten a pimp who is trying to cajole Hina to work in his brothel. So no, it’s not really your average fairy tale. 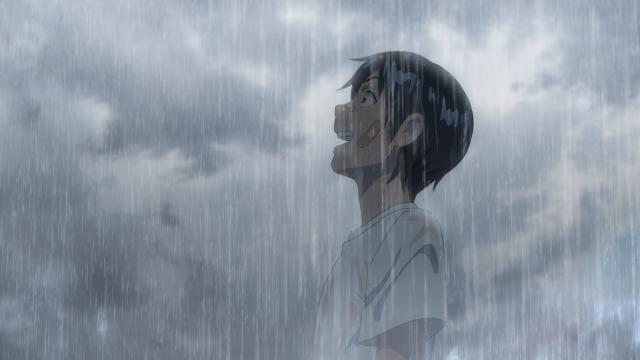 To riff on the old song, along with the rain there’s got to be a little sunshine sometime, which comes directly from the clasped hands of Hina, who turns out to be a “Sunshine Girl”- a young girl possessed by ancient spirits who can pray away bad weather for a short amount of time. The two decide they can capitalise on her extraordinary ability and start to charge people for clement conditions, providing respite from the deluge for outdoor markets, sporting events or just a simple family afternoon in the park. However, as the authorities start to close in on account of that pesky gun, the duo realise that Hina’s gift comes at a cost and if they carry on, she, like the other Sunshine Girls before her won’t be long for this world.

This is one of the unfortunate weak spots of Weathering With You, as the Sunshine Girl mythos is kept frustratingly vague with its logic and rules. Everyone seems to willingly accept that Hina has the ability to control the weather as if this were just an ordinary occurrence, but if they’re so familiar with the concept then there’s very little concern for what the seemingly inevitable drawbacks that such a phenomenon brings. As well as praying for good weather, Hina can also manipulate lightning to extraordinary violent effect, but there’s little exploration of her having to battle with this side of her powers and what it all means. 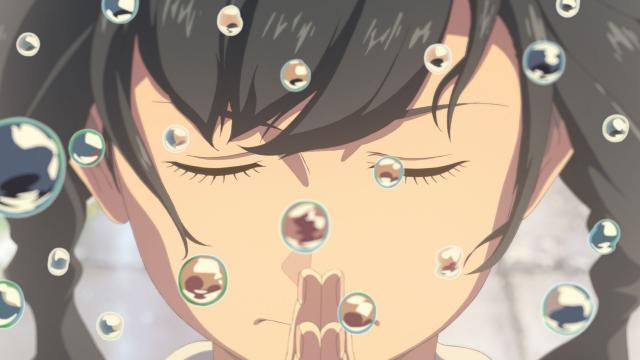 Likewise, TV weather reports cover the strange fish-like creatures left behind after the storms, the same kind Hina sees when she unexpectedly starts to levitate, but neither get any explanation. Are the storms and creatures as a result of other Sunshine Girls chasing the clouds away, or is Shinkai making an oblique reference to our own effects on the climate?

These little niggles are more than compensated by the sheer wonder of it all. The animation once again is mesmerising, with a dazzling attention to lighting and startling vistas. Neon lights are reflected in puddles with startling clarity, with some animation outshining even the most realistic CGI effects. Shinkai takes as much delight in the epic - swirling through clouds, life-threatening flash floods - as he does in the mundane, such as the delights of home-cooked food, or a sunny day in the park with friends and family. In one particular heart-breaking moment, Hadako prays for nothing more and nothing less than what he has in front of him: he has everything he needs and just wants this happiness to last.

It’s a magical and overwhelming journey of love, made even more powerful by last act, with the couple making a drastic and selfish choice to challenge nature and destiny itself. Love, like the weather, is hard to predict and while the internal logic is a bit shaky, Weathering With You delivers welcome shelter from the shitstorm of real life.

More:  Your Name  Makoto Shinkai
Follow us on Twitter @The_Shiznit for more fun features, film reviews and occasional commentary on what the best type of crisps are.
We are using Patreon to cover our hosting fees. So please consider chucking a few digital pennies our way by clicking on this link. Thanks!