Power chords and rock ballads, permed hair and eye liner, bare tops and leather trousers... Rock Of Ages is a stone-cold medley of cheese and cliché. It riffs on dated guitar bands and power-anthems and it builds its city on dry ice and key changes. And yet... it still kinda rocks.


Now I haven't seen the stage production so bear with me if I criticise script points and dialogue that also exist in the original version. Let's just agree that some things work better on stage than on film and that Rock Of Ages has been nominated for more Tony Awards than I have (although I'm still hoping to get a West End run for my one-man space opera).

Whatever your feelings are towards film musicals, Rock Of Ages has the advantage of utterly revelling in the music genre it champions. This isn't some wedding story set to the tunes of Abba 'just because' – this is a world of down-and-dirty drumbeats and distorted guitars (just a cleaned-up Hollywood version of those things) that has been fitted around the kind of pub jukebox tunes that never fail to raise a smile.

It should come as no surprise that it is made up almost entirely of schlocky story-telling and familiar boy-meets-girl plot beats, but the movie's main trump card is that a head-nodding 80s rock classic is never too far away. And the songs match the film – mentioning Bon Jovi in casual conversation will result in rolling eyes but when 'Livin' On A Prayer' comes on at a party everyone will join in the 'woahs'. And so it is here. 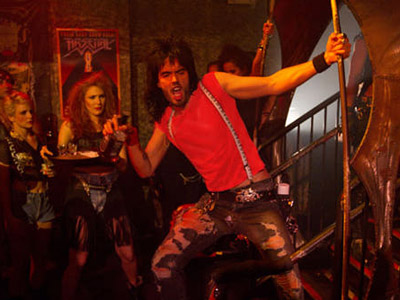 Russell Brand's got his six-string in hock.


The main problem is that the film seems skewed particularly young for post-High School Musical gleeks. There are jokes for all ages but the two leads (Diego Boneta and Julianne Hough as Drew and Sherrie) are so clean-cut and fresh-faced, you get the impression that everything they have learned about rock music has been taught to them as a series of pentatonic scales in a middle-class stage school. For all the talk of sex and scotch and grimy groupies, their central relationship is straight out of a Step Dance or a Street Mania or whatever it is these kids watch nowadays. Frankly, watching either one of them throw up devil horns is a disgrace to everything David Lee Roth stood for. Or Jon Bon Jovi. Okay, these are bad examples.

Luckily, the more experienced cast carry the rest of the film. Club-runners Alec Baldwin and Russell Brand get a lot of the funnier moments (even if Brand's supposedly Brummie accent crowd surfs away from him for most of the movie) and Catherine Zeta-Jones gets a hilarious dance routine to Pat Benatar's 'Hit Me With Your Best Shot'. The standout performance is by far Tom Cruise's Stacee Jaxx, a burnt-out rock god who staggers about in a hedonistic haze of sex and alcohol, spouting faux-philosphical nonsense riddles. It's an enjoyable two-fold oddball performance from Cruise, as he seamlessly goes from dazed idol to strutting stage star belting out another air-punching anthem. 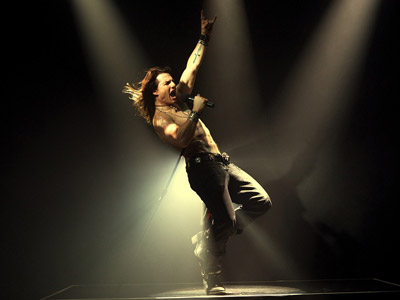 Tom Cruise during his latest appearance on The Oprah Winfrey Show.


Other niggles with the film come down to the often contrived nature of musicals in general. For example, Drew and Sherrie first bond in the singsong form of a duet before Sherrie learns that Drew is a musician and implores him to sing something for her for the first time. Um... what were you just doing? Also, Drew's initial objection of having stage fright never comes up again throughout the whole film. It's like the writers included this at the start to add an extra dimension of 'underdog-ness' but never really followed through on it.

Overall though, it's a fun, foot-stomping film; the guiltiest of guilty pleasures. It's not one to boast to friends about, but it'll be hard not to watch this without grinning through some of the cheesiest rock moments and surreptitiously twiddling some air guitar along with the solos. If going to the cinema had a Spotify-esque 'private session' mode so no one would know what you were enjoying, this is the film you'd use it for. Or, I suppose, you could just go and see it by yourself. Yes, that would work just as well.

More:  Rock Of Ages  Adam Shankman  Julianne Hough  Diego Boneta  Tom Cruise  Musical
Follow us on Twitter @The_Shiznit for more fun features, film reviews and occasional commentary on what the best type of crisps are.
We are using Patreon to cover our hosting fees. So please consider chucking a few digital pennies our way by clicking on this link. Thanks!