Rogue One: A Star Wars Story

For all the criticism aimed at Marvel, the thought of a 1-star or 2-star MCU movie these days just seems like an impossibility, and you'd like to think that we could expect the same for all forthcoming Star Wars instalments. Surely there are just too many talented stakeholders invested in the process to allow for any major misfires? And yet, there are valid reasons to fear for Rogue One: it's the first standalone spin-off, consisting of almost entirely new characters; director Gareth Edwards still has much to prove; rumours around the reshoots weren't kind; and of course the recent memory of the prequels is still hanging around like a clingy, irritating Gungan. So does Rogue One give us reason to believe that Star Wars will now always be in safe hands? Or is it just another hollow, unmemorable blockbuster facsimile? Is it a new hope, or just the latest attack of a clone?


Perhaps predictably, Rogue One is rather brilliant. It's fun, it's intense, it's even, quite surprisingly, a little bit funny. But there are caveats. This Star Wars story is such a different kind of Star Wars story to the big long Star Wars story we have been following for the past 39 years, that it's easy to see how it will have detractors. Because this is Star Wars largely stripped of the original magical elements that gave it such wonder. Forget the mythology of the Force and anything related to lightsabers, lineage, Chosen One(s) and space wizardry, this is military and political. It's about strategy and ethics rather than destiny and philosophy.

All of which is, of course, fine. There was always a singular purpose to the film - to tell the story of the theft of the Death Star plans - and that is exactly what we get. Felicity Jones is fierce, feisty and undeniably heroic as Jyn Erso, the female Star Wars lead du jour and the estranged daughter of the Death Star's Oppenheimer, Mads Mikkelsen. She is captured/rescued by the Rebel Alliance to help them amid rumours of a new 'Planet Killer' weapon and, along the way, she, rebel agent Cassian (Diego Luna) and candidly rude droid K-2SO (voiced by Alan Tudyk) pick up other individuals to join them in their quest, including blind 'Force sensitive' Donnie Yen, trigger happy gun guy Wen Jiang and out-of-his-depth Imperial turncoat Riz Ahmed. 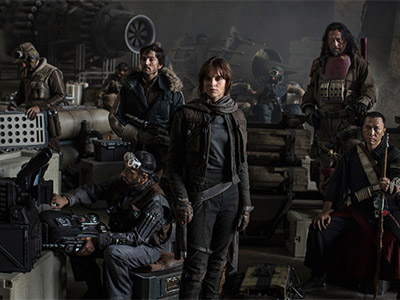 Together, they just look like lazy Star Wars cosplayers.


There is always the danger with a film of this high profile to expect or want it to over-deliver. Sadly – though understandably – Rogue One just doesn't do that. In being positioned as an immediate prequel to A New Hope, there are huge limitations placed on the story that the film can't overcome: there’s a general lack of consequence to the whole narrative because we know where it all leads, and it can never be as important as the Skywalker Saga. Meanwhile, characters are thinly sketched, a final showdown misses any real personal investment, Tudyk’s sarcastic and sullen droid provides all the punchlines to the extent of mild irritation and overarching villain Darth Vader can't be challenged in any way for fear of weakening his formidable entrance in Episode IV. Most of all though, Rogue One consistently feels like it is all just headed towards a dovetailed dead end.

It all sounds like criticism, but I guess it shouldn’t be – we knew what we were signing on for when the film and its premise were first announced. Instead, criticism is reserved for the high levels of hammy acting (in particular, Forest Whitaker’s level of cartoonery in this film registers as off the charts on the Jupiter-Ascending-ometer), for the uncanny mouthing of certain CGI cameos, and for the occasionally eye-rolling convenience of certain plot points and sequences. Perhaps worst of all, this ragtag group of misfits thrown together on a crusade of the utmost importance just doesn’t have any chemistry. For all the neat, simply categorised personas travelling together by the film’s end, you’d hope for a Guardians Of The Galaxy level of camaraderie, but none of them ever really interact with each other. A missed opportunity for adding layers of character goes awry in favour of just going through the motions of a story we kind of already know.

And yet, what the film gets right, it knocks out of the galaxy. Every visual aspect of the movie is impeccable, from the tarnished feel of the original trilogy to dramatic reveals of giant AT-ATs, to brand new ship designs that soar and fold and spread their wings during battle, as well as more familiar Star Wars layouts like huge, impractical shafts and massive grey consoles flickering bright plastic lights. Meanwhile, others will get their kicks from the copious amounts of nods and references that will appease casual viewers, fans, supergeeks and uber-nerds. 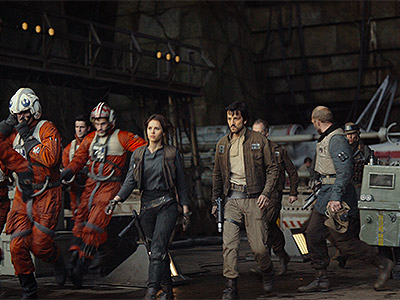 
The biggest success, however, is in the film’s finale, which features an extravaganza of ground-level, aerial and space assaults all occurring at the same time, resulting in dizzying dog fights that serve as an homage to – and an improvement on – the TIE fighter battles of old. It’s sheer action spectacle played out at every scope and scale for maximum grinning, jaw-dropping thrills.

Overall, Rogue One still feels like a strange offering. It is simultaneously a movie that lives and breathes the original Star Wars aesthetic, but demands to be separate from the saga. It’s a juxtaposition that the film ultimately balances out well – feeling as much a part of the Star Wars universe as standing apart as a purely one-off tale. And on both of those terms, it’s a huge success.

More:  Rogue One A Star Wars Story  Rogue One  Star Wars  Felicity Jones  Ben Mendelsohn  Donnie Yen  Mads Mikkelsen  Alan Tudyk  Forest Whitaker
Follow us on Twitter @The_Shiznit for more fun features, film reviews and occasional commentary on what the best type of crisps are.
We are using Patreon to cover our hosting fees. So please consider chucking a few digital pennies our way by clicking on this link. Thanks!