Confession: I went to a screening of this film over a month ago and, as the credits rolled, I turned to my missus and said “I’m going to have to write my review for this straight away because that was one of the most forgettable films I’ve ever seen”. I didn’t. And now I’m scrabbling around for things to say about a generic action thriller in which both Denzel Washington and Ryan Reynolds coast along in bog standard roles. To be fair, if they didn’t make much of an effort, I don’t see why I should.


It’s not all down to my lack of professionalism though. There isn’t much to say about this film because, frankly, nothing much happens. Rogue CIA agent Tobin Frost (Washington) escapes some bad guys by turning himself in and then gets held and interrogated at a government safe house run by relative rookie Matt Weston (Reynolds). But then it comes under attack and the pair are forced on the run together, with Weston still trying to control his ‘prisoner’ Frost. Of course, this being a modern-day action thriller, not all is as it seems and that charismatic, experienced Tobin Frost can’t really be a bad person, can he? Maybe one of those shady-looking CIA top dogs wants to bring him in for the wrong reasons, eh? EH?

All of which sounds like a perfectly good set-up for an enjoyable film, but the problem is, when Reynolds and Washington hit the ground running, so does the film…and it doesn’t stop. Not for a really long time anyway. The pair are chased, they chase, at some points they chase each other, but considering how fast-moving the film is, it never really feels like it is getting anywhere. 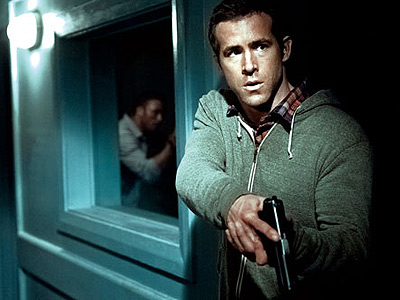 The Cape Town setting helps to ease the monotony somewhat as we have an unusual array of locations and backdrops to enjoy during the high adrenaline action, including a lengthy sequence in a crowded football stadium, and a tin-rooftop dash across poorly built shacks. And, all the while the texture onscreen remains suitably gritty and grainy to make you feel like you watching REAL-LIFE agents do REAL-LIFE action stuff. In fact, given Washington’s involvement and the high-speed skirmishes, this is the Tony Scottiest film you’ll ever see that isn’t directed or produced by Tony Scott.

Reynolds maintains an unlikely heroic composure throughout, despite his character’s obvious fish-out-of-water bewilderment. And he rightfully dials his “I know, right?” comic disbelief down to zero so as to be a more effective counter balance to Denzel’s h-authentic perf-h-ormance.

You know what to expect from Washington these days – his once incredible portrayals have long given way to just acting natural, speaking quietly and calmly and always being knowledgable. Luckily, any onscreen time with the man just oozes with his effortless charisma and things are no different here. The film is more interesting when he is the one delivering the lines, whether it’s imparting advice to his own interrogators, or telling Reynolds obvious bon duhs like “it’s difficult to hold down a relationship in this job”. 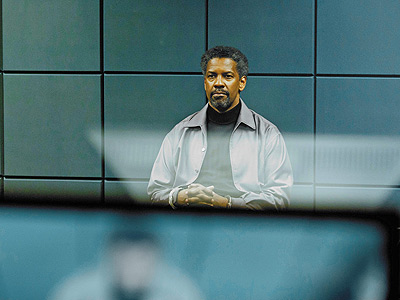 It’s all in the WAY that he sits still

I wouldn’t be so cynical as to suggest that the best way to judge a film is to see how much of it you remember a month later, but it doesn’t say much about Safe House that I can only recall a grand total of about 2 minutes, and those are mostly moments that enjoy good quality character time rather than any flash-bang excitement. I do remember that watching the film wasn't a terrible experience, just one that left no great impression on me. So there we go: a safe, unmemorable three-star rating for a safe, unmemorable film. Will that do? Can I move onto my Project X review now?

More:  Safe House  Denzel Washington  Ryan Reynolds  Daniel Espinosa
Follow us on Twitter @The_Shiznit for more fun features, film reviews and occasional commentary on what the best type of crisps are.
We are using Patreon to cover our hosting fees. So please consider chucking a few digital pennies our way by clicking on this link. Thanks!