"Sequels? Oh please! By definition alone, sequels are inferior films!" It's a good job Randy the film nerd was killed off in Scream 2, because he'd have been bloody livid if he survived only to find himself in Scream 3, and far less impressed if he'd managed to stay alive long enough for Scream 4/Scre4m/SCRE4M, the now clichéd 'one sequel too far' that every horror franchise seems destined to suffer. 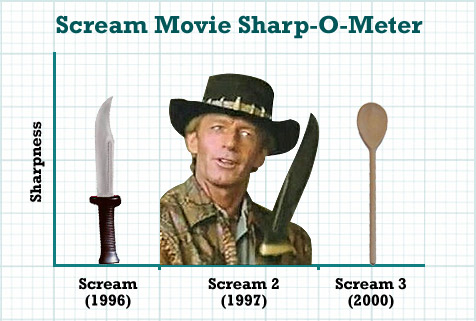 I'm not saying the omens weren't good, but when was the last time you saw a decent horror fourquel? And one so clearly aimed at rebooting the franchise at that? I'll just start writing my hate-filled review, and...

Holster that bile, hoss. Against all odds, Scream 4 is actually not bad. In fact, it's pretty damn good. It's way too indulgent, basically a rehash of the plot of Screams 2 and 3 and it offers so many nods and winks to the audience it tends to come across like an epileptic Anne Robinson. But these are the rules of Scream: this is par for the course. What is surprising is how effective a whodunit it is in spite of its baggage and how much of a difference it makes to have a horror film with mostly pleasant characters for a change.

There's little I can write that wouldn't be considered a spoiler, but I will say that Scream 4 probably doesn't play out how you might expect. Wes Craven is obviously well-experienced in misdirection by now, but there's a kind of genius not just in the way the film ends, but also how it has been marketed and presented. The kills are brutal (including one really nasty bedroom redecoration) and a half-dozen sexy teens are butchered, so in that respect, it's business as usual. But there's a twist - a genuinely surprising one at that - and the line it draws in the sand marks Scream 4 out to be way smarter than just another bimbo butcherfest. Let's just say if you though this was going to be a reboot, you're both right AND wrong. 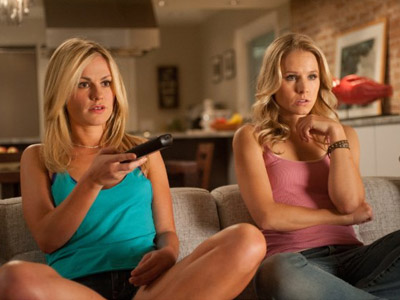 The return of Kevin Williamson on scripting duties makes a measurable difference. Gone is Ghostface's chameleonic phone manner and the cheeseball deaths of Scream 3 (death by ironic fax) and in comes a knowing script that's not afraid to show its work. At times, the layers of self-reference begin to stick together and the opening kills are HARDCORE META but the bare bones of the film represents a return to what made the first two movies great: a modern murder mystery with added chuckles and a real sense of danger.

That's mostly due to some great character work by the principle cast, particularly the old guard. Neve Campbell is the definition of 'steely' as Sidney (even if she would have gone irretrievably bananas in real life by now), who displays noticeable maturity. David Arquette's Dewey is the worst police officer in cinema history, but he's a lovable enough lug, enough to have you clenching every time he comes within a half-mile of anything sharp. Courteney Cox, however, continues her tradition of looking absolutely horrorshow throughout the entire franchise, adding Scream 4's trout pout to the lime-green pant-suit of Scream, the red streaks of Scream 2 and the Dumb & Dumber fringe of Scream 3.

Fair enough, under close scrutiny, Scream 4 makes little sense; it's seemingly set in a town with only retards as policemen and despite being populated by characters who know everything there is to know about horror films, they still seem unable to behave like rational human beings in scenes of extreme peril (although, given my first point, perhaps there's a reason no one ever calls the damn police). And yes, Ghostface is still clumsy as fuck. 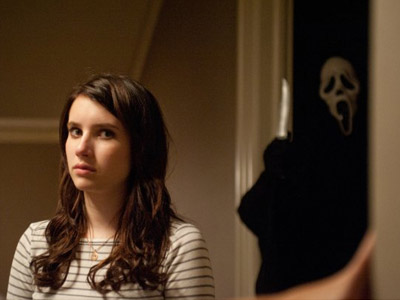 HURRRRR I DONE A KNIFE


Let's shoot for a little perspective here. This is a third sequel to a horror film about horror films, starring a director past his prime and seemingly only capable of profiting from his past glories. Scream 4 has no right to be half as entertaining as it is, and when the dust has settled and the blood on the walls has dried, the bold choices that Williamson and Craven have made speak for themselves. Brutal? Funny? Clever? You get the feeling that maybe, just maybe, Randy would have approved after all.

Just a heads-up, nerds - consider the comments section fair game for plot spoilers and discussion, but please use the [spoiler] tags when appropriate or I'll stab you in the nuts like Sidney does to Dewey in the last scene.
More:  Scream 4  Scre4m  Neve Campbell  Courteney Cox  David Arquette  Emma Roberts  Hayden Panettiere
Follow us on Twitter @The_Shiznit for more fun features, film reviews and occasional commentary on what the best type of crisps are.
We are using Patreon to cover our hosting fees. So please consider chucking a few digital pennies our way by clicking on this link. Thanks!