Seeking A Friend For The End Of The World

True fact: If everyone found out that life on earth was going to be snuffed out by a meteorite in three weeks' time, your average person is more likely to embark on a hedonistic riot of sex, drugs and anarchy than embark on a quirky odd-couple road trip in a last-ditch attempt to provide some meaning to their life. But hey, this is the end of the world as indie cinema knows it.


Written and directed by the bacterial-sounding Lorene Scafaria, this film is very much in keeping with her previous scripting effort, the terminally hip Nick And Norah's Infinite Playlist. While the idea of impending doom might suggest darker themes and a downbeat plot, this is an altogether calmer-geddon, with a muted, nuanced lead performance from Steve Carell, a cool-kid soundtrack and heartwarming overtones. The overall result is a film that couldn't be more hipster if it wore a cardigan, drank a skinny latte and ate a quinoa-based sandwich wrap.

Carell plays Dodge, a depressed, introspective man whose wife left him when news broke across the world that a meteorite is set to destroy all mankind. A chance encounter with scatty neighbour Penny (Knightley) leads to a mid-life crisis that sees him try to find The One That Got Away before the end of the world. Penny, of course, accompanies him in order to a) find a way to get back to her own family, and b) provide some chatty kookiness to contrast with Dodge's own quiet reflection. Together the mismatched pair traverse a spiralling society of characters – each of whom are coping with their imminent death in their own way – and, of course, have bittersweet feel-good times in the process. 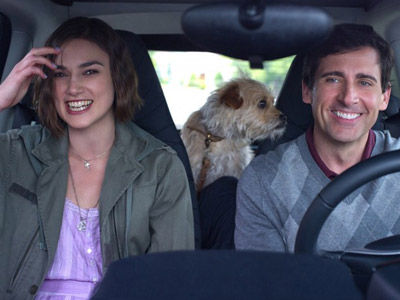 
It's easy to sound cynical about a film that so easily falls into that movie subgenre of 'sappy people have real feelings and stuff', but the truth is that this is an affecting and affectionate tale that plays trendy indie chords on your heartstrings. It may not always seem genuine (Penny's character-defining collection of vinyl records might as well be a tin box of childhood toys, or a Polaroid camera, or even a skateboard with 'vintage' written on it), but the warm, angsty tone still hits the sweet spot.

Where Steve Carell downplays his usually madcap antics, instead giving us his 'serious dramedy face', Knightley overplays her kook, Penny. At first, her over-friendly, heart-on-her-sleeve hippyishness seems cloying and desperate but, as the story progresses, Penny's child-like naïvety shines through and Knightley gets several brilliantly acted moments that help remind us of the gravity of the situation (and indeed of the meteorite).

The film is helped along the way by a whole host of bit-part characters providing the bigger laughs. From Rob Corddry's stopped-giving-a-fuck best friend, to Adam Brody's heartbroken boyfriend, to a whole host of minor characters that dip in and out of the screen to each provide one more consequence of the forthcoming Armageddon, the film is packed with (mostly gallows) humour. Unfortunately, on occasion, this need for funnies gets the better of the script and, for example, a farcical scene where Penny and Dodge visit a burger-bar-turned-orgy-house sits uncomfortably in a film that otherwise draws slow laughs from sharply observed character behaviour. And that's taking into account the burger bar's welcome cameo from Gillian Jacobs. 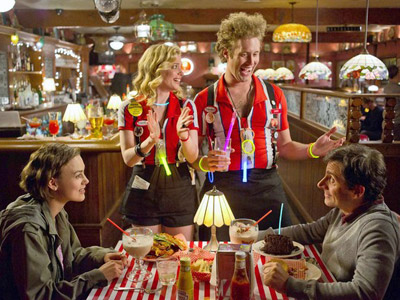 "Would you like to try the side order of wackiness?"


Overall, it's an enjoyable, if typical, comedy drama. The odd bits of misplaced surreality and emotional manipulation are far outweighed by the great central performances and cameo conveyor-belt. More importantly, the film just about delivers an ending that acts as a worthy pay-off to the previous 90 minutes of foreboding. Although anybody rooting for Bruce Willis, Ben Affleck and the gang to save the day will, like me, be bitterly disappointed.

More:  Seeking A Friend For The End Of The World  Lorene Scafaria  Steve Carell  Keira Knightley
Follow us on Twitter @The_Shiznit for more fun features, film reviews and occasional commentary on what the best type of crisps are.
We are using Patreon to cover our hosting fees. So please consider chucking a few digital pennies our way by clicking on this link. Thanks!