Sherlock Holmes: A Game Of Shadows

Once again, Guy Ritchie delves into Sir Arthur Conan Doyle's lesser-known casebook of Sherlock Holmes – the one filed under 'improbably explosive' (subfolder: homoeroticism) – and pulls together a sequel that, by the law of the blockbuster, is destined to be a lazy rehash of the first film. However, not so in this case; Ritchie has upped the ante on every level, building on the same style and plot devices as Holmes' last outing but raising the stakes in the process and delivering an adventure that's just as fun as the first time round.


Tonally, this is a very different film than before. As Moriarty's global scheme becomes clear, it's obvious that there are much more serious consequences at stake than when Mark Strong tried to pretend he harnessed a supernatural ability. And it soon becomes a very personal battle of wits, as Moriarty makes no pretence about going after those closest to Holmes, including Watson and his new wife.

Along the way, the action scenes are more brutal, with injuries sustained rather than swept aside and, more importantly, Holmes appearing more fallible than ever before. On more than one occasion, Moriarty manages to best him, trick him and trap him, with the great detective barely surviving by the skin of his teeth. 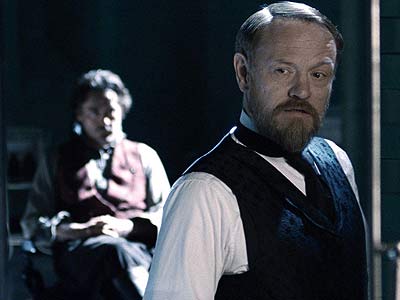 I have more clevers than you.


In keeping with the raised stakes, Ritchie eases off on the comedy just a touch and amps up the intensity, making for a sequel that, if not darker, at least lives up to its shadowy subtitle. At the same time, Holmes seems less sure of himself than previously, often coming across as a paranoid loon than a sharp-witted genius. And, as he follows a lead that takes himself and Watson across country borders to France and Switzerland, it is even a little clear that he is outside his London (comfort) zone 1.

Of course, Downey Jr takes all of this in his stride, knowing just how to portray this slightly crazed version of Holmes, as well as the few scenes in which he is required to show a hint of sadness. Even more so than Tony Stark, this is the role he was always meant to play, and he pulls off every scene effortlessly. As too does Jude Law who, as before, has the task of being Holmes' partner in action, his soundboard and his occasional punchline. Law gleams as many laughs as his self-assured co-star, particularly in two pre-wedding scenes that see him pratfall while drunk and then stagger delicately while hungover.

It’s a bromance that is still just as enjoyable and entertaining to watch, but this time the film is in on the homoerotic joke. It's no coincidence that, throughout the course of the adventure, Holmes and Watson find themselves in turn wrestling in underwear and, later on, waltzing together. At one point Holmes lies on the floor of a train carriage, half naked and half in drag, and invites Watson to “lay with him”. It's played innocently, but we know the undertones well enough to titter all the way through the exchange. 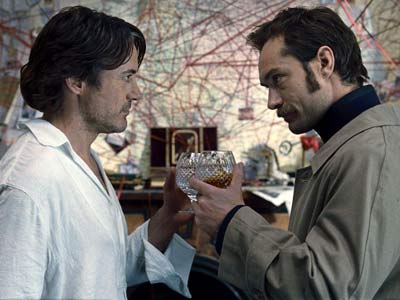 Let's drink and swear never to speak of this night again.


Stephen Fry and Noomi Rapace lend adequate support to our hero partnership, the former getting several good lines while really just playing a composed version of himself, and the latter making the most of the little she has to work with. The real stand-out addition to Baker Street’s legend, however, is Jared Harris portraying the poised, calm Moriarty. With a jittery Holmes working hard to play ‘the game’, his confident antagonist looks like he has already won and packed away the board and pieces.

There are, as expected, a few niggly complaints. Whereas, in the first film, Holmes’ deducing was quite plausible when all the elements were spelled out, here it quite often over-reaches. Knowing that your opponent is carrying a knife is one thing, but playing out in your head exactly how three guys are going to attack you and react to your counter-measures is plain clairvoyance.

Also, during these sequences, Ritchie relies a little too heavily on the visual style he adopted in the first film, with the action often jumping ahead or backwards in time, flitting between slow-mo and fast-forward, whenever the cogs in Holmes’ mind start whirring. It’s a fancy-looking visual trick, but a little overstated each time. 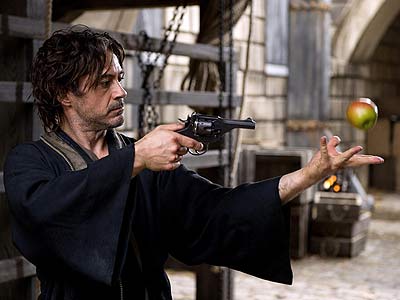 Apple to be replaced with Moriarty's head in post.


Having said that, the film still works through its action scenes with brilliant conviction, from an exhilarating train ambush to a hyper-stylised forest shootout that sees wood splintering in all directions around our escaping heroes, all slowed down to an almost-pause. Mixing the period setting with the flash camerawork certainly makes for a wholly original visual approach that only adds to the film’s blockbuster flair.

And all of the momentum builds towards a final, captivating verbal showdown between Holmes and Moriarty, which is too good to spoil here. Needless to say, the last 20 minutes might be the best of the whole film, with Conan Doyle aficionados kept satisfied as well as a final reel delight for all fans. Overall, it’s a welcome return for the World’s Greatest Detective Other Than Batman, and a sequel that impressively conspires to be more challenging than its predecessor.

More:  Sherlock Holmes A Game Of Shadows  Sherlock Holmes  Robert Downey Jr  Jude Law  Guy Ritchie
Follow us on Twitter @The_Shiznit for more fun features, film reviews and occasional commentary on what the best type of crisps are.
We are using Patreon to cover our hosting fees. So please consider chucking a few digital pennies our way by clicking on this link. Thanks!