BETWEEN THE ROCK AND A DIE HARD PLACE 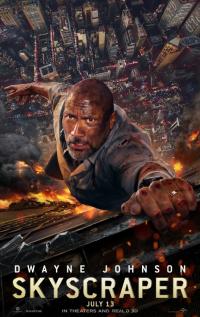 Almost all films starring Dwayne ‘The Rock’ Johnson (or ‘Dwock’, as I will now call him, for ease) play on the fact that he is an impossibly-shaped human with overinflated balloon arms that are at constant risk of bursting and jettisoning his screeching cannonball head around the room. Not to mention that he acts like a small child that has somehow Freaky-Fridayed with his favourite He-Man figure and doesn’t know how long he has left to make the most of it. As such, Dwock always plays larger-than-life characters in larger-than-life films. Skyscraper, however, sees a return to relatively more serious action. It’s still an overblown, ludicrous mess, but it’s genuinely refreshing to see a film like this played with such sincerity. Such ridiculous, idiotic sincerity.


One easy film-for-film comparison to make in Dwock’s oeuvre is San Andreas in that, unlike his jungle-based films like Welcome To The Jungle, Jumanji: Welcome To The Jungle and the upcoming Jungle Cruise, this is a return to the CONCRETE jungle. The focus isn’t on threats from the wild, but on resourcefulness in the face of city-wide destruction. Y’know, like Rampage. And despite the absence of giant raging beasts, Skyscraper is just as hilariously unbelievable.

Overlapping news reports at the start of the film give us the set-up: an implausibly wealthy businessman has built the world’s tallest building in the Chinese-box-office-friendly heart of Hong Kong. Dwock and his family - wife Neve Campbell and twin kids - have been the only residents living there as part of his job to assess the security of the structure. While Dwock is out of the building, a criminal gang infiltrates it and starts a chemical fire on the middle-ish floor, trapping Neve and the kids inside. It’s all part of a targeted attack on the wealthy businessman, who of course is living in the swankiest of penthouses on the top floor, but it’s up to Dwock to fight his way into the building and save his family. 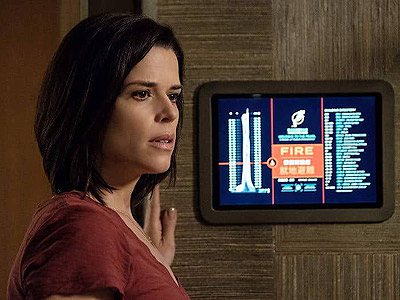 Such a sophisticated Fire Warning system.


Oh, and he only has one leg. Thanks to a failed military operation 10 years ago, Dwock has a false limb and an aversion to guns. To put it another way, when he lost his leg, he also put down arms, which is something I’m only just realising somebody should have definitely said at some point in this film. Either way, it’s genuinely a progressive twist for disability representation in this kind of film, even if the jury is still out about whether this can be seen as being 'sensitively handled'.

"
"
Skyscraper contains all the least sophisticated elements from the 90s action era
Given the film’s setting, Skyscraper is clearly trying to strike a balance in appealing to both domestic and Chinese markets, but it really just ends up compromising on both. The languages are split fairly evenly across the film, but with Dwock taking up all the action beats, the Chinese-spoken parts mainly consist of two police detectives who do nothing more than watch him on live news coverage from their van. Their only breakthrough in catching the bad guys comes when they are given the description “Scandinavian accent... about 6ft” and they somehow manage to immediately bring up the right suspect on their computer. It’s just one of a thousand leaps in logic that this film takes in its stride. 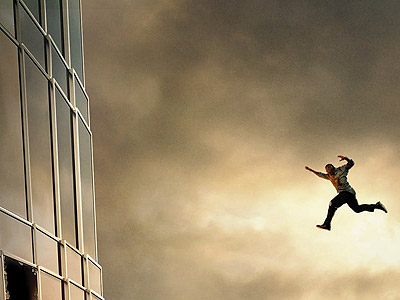 Full disclosure: I wrote that sentence specifically so that it would lead well into this image.


It should come as no surprise that the entire film carries a throwback sensibility to 90s action movies. The budget is bigger and – thanks to cinema inflation – the money-shots are money-er, but this is a film deliberately trying to emulate an era of Hollywood filmmaking that everyone looks back on fondly, despite only a small percentage of titles actually aging well. Dwock himself has name-checked Die Hard and Towering Inferno as huge influences on the film, which is a little bit like saying that the iPhone 7 was a huge influence on the iPhone 8, such is the extent that these films are used as a template. And yet this approach works. The simplicity, the underdog championing and the snappy pace all make for a fun flick that never stops entertaining on some level.

Unfortunately, along with all the features that we still enjoy about 90s blockbuster cinema, Skyscraper contains all the least sophisticated elements from that period too. Some lazy casting and on-the-nose performances means that no one is kept guessing about who is going to turn out to be a bad guy. This is particularly true of Noah Taylor, whose tweed suits, foppish hair and foot-long sneer telegraphs his character’s true intentions before even the pre-presentation trailers. 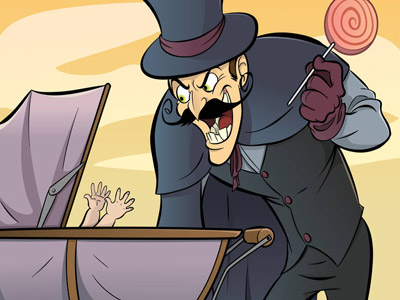 I couldn't find an actual image of his character, but it's basically this.


The same goes for the unsurprisingly clichéd storytelling, where you can spend the first 20 minutes of the film playing ‘Spot The Things That Will Be A Callback Later On’. This doesn’t fare well when combined with the usual absurdity that you would expect from this kind of bombastic actioner. In this case, derisory LOLs can be had at the expense of a super-human reliance on duct tape; a scene in which Dwock holds up a bridge with his bare hands by hanging on to two cables that don’t appear to be connected to anything; and a climactic showdown set in what is supposed to be “the world’s greatest tourist attraction”, but is basically just a fairground hall of mirrors.

So not an exemplary instalment in Dwock's docket of movies, but this straight-up, honest approach to classic action still sits comfortably in his repertoire, even if his comedic performances are more enjoyable. What needs to be nipped in the bud though is the half-baked straddling of the two genres, the tongue-in-cheek pretence of "Yes, this is a bad trashy movie, but we KNOW that it’s a bad trashy movie, which makes it a good trashy movie". Because it really doesn’t. And it is much better to aim for Skyscraper’s sincerity, even if - on this occasion - it ended up being sincerely a bit shit.

Additional observations:
- This movie made me long for an action thriller that had even half as many hairs on its balls as Air Force One, although obviously Donald Trump has ruined any prospect of that ever being remade
- I was really hoping the villain would somehow be dropped on top of a really big tall pointy roof on an adjacent skyscraper. I maintain this will happen in a future Bond movie, when a villain is impaled on The Shard.
- I don't believe for a second that Dwayne Johnson did any of these stunts himself, because he is roughly the same size and build as a Portaloo.
More:  Skyscraper  Dwayne Johnson  The Rock  Rawson Marshall Thurber
Follow us on Twitter @The_Shiznit for more fun features, film reviews and occasional commentary on what the best type of crisps are.
We are using Patreon to cover our hosting fees. So please consider chucking a few digital pennies our way by clicking on this link. Thanks!