Sleeping With Other People


This captured my attention for many reasons, not least because he stood up right in my line of sight and made a big fuss as he clambered out past everyone else in his row of seats. And, as galling as it is, let’s forget for the moment that this man was probably a professional critic, being paid to enjoy the hospitality of a press screening and then not bothering to stay until the end of the film he’s reviewing. It doesn’t help that his journey to the exit was interrupted only to drop off the now-empty glass of free wine he had been offered on entry.

Instead, I am more interested in who this guy is. What makes a man not only walk out of a film after an hour (with about 40 minutes still to go), but deliberately disturb everyone else as he is doing so? Was it bad form to do that? Or was it a brave, principled stance against terrible cinema that should be applauded? 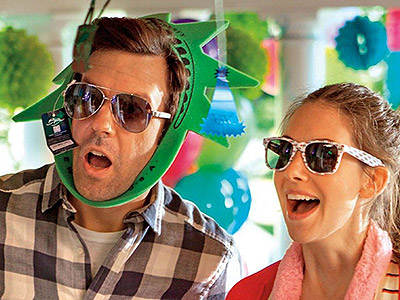 At this point, I'm already going with the latter.


Perhaps we should take his claim at face value and believe that this film really is the worst he has ever seen in his life? There’s obviously no way of me knowing what his control group consists of, but if, for example, the only other films he has ever seen are The Godfather, Fellini's 8 1/2 and, oh let's say, Spy Kids 2: The Island Of Lost Dreams, then I would say that he was correct in his claim and Sleeping With Other People really is the worst film he has ever seen in his life. If, however, he has seen anything Adam Sandler has made in the last nine years, then I would have reason to question it.

Most importantly though, what was it specifically that made this man walk out with such assurance and disgust? Was it the film as a whole, a particular theme or the scene playing at that exact moment, in which Alison Brie was having sex with her new, boring lover Marc Blucas and instructed him to "be rude" to her clitoris?

Either way, ironically, this righteous renegade actually missed out on what was easily the worst part of the film: an ending that had no faith in either fulfilling its predictable rom-com set-up or boldly defying it, opting instead to do both. I can only imagine the noise of disgruntlement the cinema escapee would have made had he sat through the final, anti-climactic scenes in which both lead characters descend into dickish behaviour and all investment in their relationship is lost. 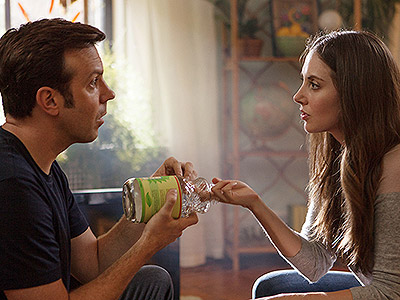 In a way, we were all similarly violated.


Thankfully for me, I didn't mind sitting through this last act because our mystery man gave me plenty on which to ruminate, providing a distraction as I wondered just what faults he found in the first majority of the movie to send him headed toward the exit.

Was he a sensitive prude, outraged at the explicit and frank manner in which the lead characters discussed all things rumpy, and indeed, pumpy? Was his old traditional values rocked to the core as Sudeikis and Brie made crude fun of the beautiful art of lovemaking?

Perhaps he was left in disbelief because, despite attempting to portray Alison Brie’s character as a strong, independent woman, the film had her needlessly swanning around in revealing underwear at every opportunity, just for the benefit of the viewer? Did he throw his head in his hands when she revealed that she liked to mooch around her apartment by herself while wearing next to nothing? Or when she took Sudeikis’ character for a chat that involved her going shopping and trying on sexy lingerie for no reason? 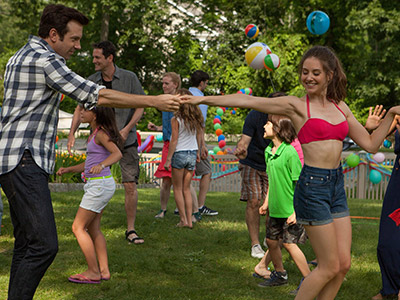 This takes place at a child's birthday party, because 'funny' but mostly because 'boobs'.


Or maybe he was just feeling tired of the Apatow/McKay style of semi-improvisational acting, particularly considering that, in this film, it seems that the first, least funny take has been chosen for each scene.

Most likely, it was a combination of all the above and much more. It’s a shame that he didn’t apparently share in the few chuckles that the film does offer: the occasional moment when the riffing dialogue works, or when the odd brilliant outburst (mostly from ‘best mate’ Jason Mantzoukas) hits home. But it’s also understandable if he didn’t think that it was worth sitting through the dire sexism and half-cocked plotting for the sake of a few gags.

Either way, the film may be terrible, but it’s not a complete abomination. I haven’t experienced many walk-outs in my time attending screenings, but while it is easy to take this man’s showy exit as a sign that the film isn’t worth anyone’s time, maybe we should instead remember that there were 50 or so other people in that room who chose to stay in their seats and see the film through to the end.

But then that’s kind of what film critics should do anyway, right?

More:  Sleeping With Other People  Leslye Headland  Jason Sudeikis  Alison Brie
Follow us on Twitter @The_Shiznit for more fun features, film reviews and occasional commentary on what the best type of crisps are.
We are using Patreon to cover our hosting fees. So please consider chucking a few digital pennies our way by clicking on this link. Thanks!