Like an idiot, having been too busy eating free crisps to read the press notes beforehand, I couldn't remember Mary Elizabeth Winstead's name or where I'd seen her before until the closing credits of Smashed. This is the sort of thing that will usually gnaw at me for the duration of a movie, but in this case it was easily forgotten: hers is a stellar performance in a film that refuses to take the obvious path, and is all the more engaging for it.


People off the telly are in indie films quite a lot, I've noticed. Maybe that's because there's not a lot of cash to throw at casting sessions so it's cheaper just to channel-flick for a while till you find someone who looks the part. Maybe it's because their familiarity to audiences is helpful when they've played a similar role before, but in a small production there's no risk of it derailing the whole thing, like if Martin Sheen showed up playing the President in Transformers 4 and nobody could get Jed Bartlet out of their head. Maybe it's just because the actors only have a few weeks a year to do a movie project.

It's pretty much definitely the third one, come to think of it. But it is interesting how the characters Aaron Paul and Nick Offerman play in Smashed aren't that dissimilar to their TV counterparts in Breaking Bad and Parks and Recreation respectively. It's intelligent rather than lazy casting, though. Their familiarity makes them unshowy support for what is the real point of Smashed: a flat-out brilliant performance by Mary Elizabeth Winstead. 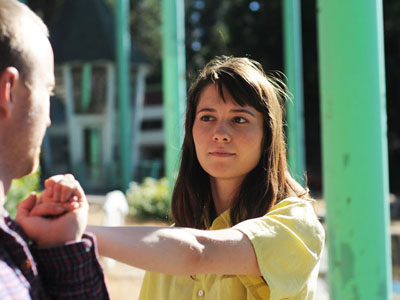 There's, uh ... what's her name again? You know, the one with the hair. She was in that thing with the guy.

With her husband Charlie (Paul), Kate (Winstead) lives a fun-filled life of heavy drinking until she begins to rethink it after impulsively smoking crack with a stranger and vomiting, hungover, into a bin in front of the class she teaches. Fun-filled is the phrase, too: where this could be a straight-up moral parable about the dangers of drink, Smashed does just the opposite, never shying away from showing that Kate and Charlie have a great time when they're drunk. Crucially, this is also when they're shown to be most in love.

Or so you think. Her struggle to get sober is - intelligently - not shown to be much of a struggle at all, but what's more significant is that stripping away the booze reveals problems she didn't notice before. In particular, maybe she and Charlie, who continues to drink, aren't as in love as they thought. You could blame Charlie for this but you're not encouraged to: he's maybe a little childish (as suggested by his being a stay-at-home writer, one of those jobs that's Hollywood shorthand for 'not a responsible adult'), but he's not a bad guy, and Paul's trademark vulnerability makes sure we never think it. 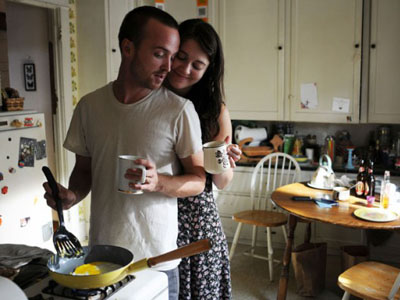 "No offence, but this meth lab's rubbish. I can only cook eggs here."

I asked myself more than once whether these characters really were alcoholics, and that's testament to how director James Ponsoldt deals with an issue that's so often forced home in black and white terms. Other than some camerawork that's a little too self-consciously jerky at times, his is a light touch; he's unwilling to damn his characters for what we might see as flaws, and confident enough to let his actors carry off the balancing act between likeable and not.

One IMDb search later it turned out I'd seen Mary Elizabeth Winstead in two or three films before. On all of those occasions I'd been perfectly well aware of what her name was. If I'd been drunk, this would be an ideal thematic ribbon with which to tie this review together. But I wasn't. I'd just eaten a lot of crisps.

More:  Smashed  Mary Elizabeth Winstead  Aaron Paul  Nick Offerman  Octavia Spencer
Follow us on Twitter @The_Shiznit for more fun features, film reviews and occasional commentary on what the best type of crisps are.
We are using Patreon to cover our hosting fees. So please consider chucking a few digital pennies our way by clicking on this link. Thanks!