Following his glorified cameo in Captain America: Civil War, everyone has been wondering exactly how how Marvel will reboot the character in his own solo outing. No one wants to see another bitey radioactive spider, but how do you tell an origin story without actually telling the origin story? Is he definitely part of the ongoing Marvel timeline forever more? Can he suddenly slot into the meticulously planned MCU? Basically, is the title correct? Is Spider-Man really coming home?


For all the dynamic action and funny quips, let it be known that the single best creative decision made here was to answer all of the questions above by addressing them onscreen. Can he fit in with the Avengers? Focusing the entire film on Peter Parker's desire to prove himself worthy of just that is a stroke of genius.

Not only does it work as a neat thematic parallel to the rights issues between Sony and Marvel, but more importantly, in lieu of a dying Uncle Ben, it gives Peter his responsibility arc. He has a new suit loaded with Stark technology and he's still buzzing on the high of working with the Earth's Mightiest Heroes, but that's a great deal of power to wield. And, when that happens, we all know what lesson Peter has to learn. 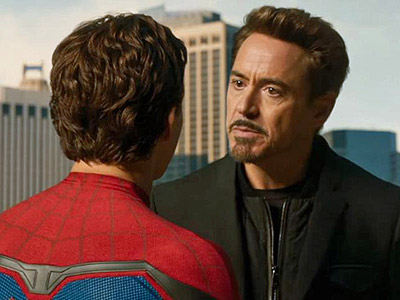 
Happily, there's no sign at all that this may have been a fraught creative venture between Sony and Marvel. If there were any tough negotiations to be made about exactly how to work together on this shared character, the finished product doesn't show a single sign of any contrived string being pulled. This is Spider-Man swinging gleefully and joyously within the MCU and even Tony Stark's presence - a story element presumably borne out of a contractual agreement - is given the perfect amount of screentime.

Downey Jr gets far more to do than tick off a contractually obliged cameo, and yet there's no team-up either (the final two-shot in the trailer and over-used Iron Man pose on the posters are bizarrely absent from the final cut). Because there doesn't need to be - Stark provides just enough snark and scolding to give the film its MCU context, but this is still a film centred on a 15-year-old kid from Queens who has awesome abilities.

All of which is important because for years now all of our big-screen comic-book stars have been fighting aliens, or gods, or alien gods, or each other. The forthcoming Justice League movies are probably going to have all four of those options at once. So I can't stress enough just how refreshing it is to see small-scale superheroism again. 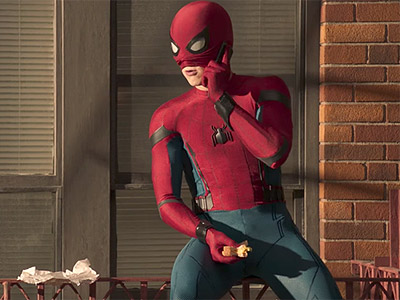 "Don't worry, when Thanos turns up, I'll be ready."


In discovering an underground operation - led by Michael Keaton - stealing Chitauri tech and turning it into powerful gadget-weapons to sell on the black market, Spider-Man has his self-appointed mission to prove himself to Stark. As he sees it, taking down these criminals by himself will gain him instant access into Avengers HQ. The problem is, after five previous films always neglecting this aspect of the character, Peter has homework to do. And a high school crush to contend with. And a high school bully to put up with. And, in this instance, a nerdy best friend who has just discovered his secret identity.

These are all character-building facets of a thankfully grounded superhero still learning how to do his job, and it's this sub-plotting, along with Peter getting to grips with his new supersuit, that helps to sell the idea of this being a fresh, new origin story for the wall-crawling icon. It's also where all the humour gets mined, because as a young, earnest newbie, Peter Parker may be graceful in his movements, but he's not graceful in his decisions. One chase sequence through neighbourhood backyards (which riffs on, and then screen-checks, Ferris Bueller's Day Off), sees the webhead causing chaos and destruction, scaring camping children and felling treehouses. And in typical Marvel moment-puncturing, it includes a brilliant sight gag of Spider-Man suddenly finding himself in an open field with nothing to swing on. 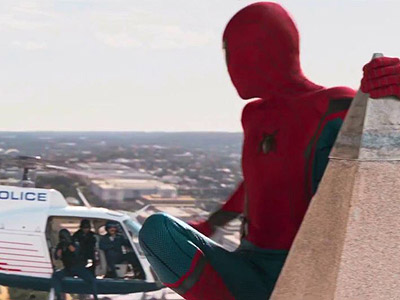 "Thank god, you guys turned up - I've been stuck up here for two hours."


It feels pointless at this stage to talk about it, because we all got a flavour of his Peter Parker in Captain America: Civil War, but Tom Holland is, of course, wonderfully funny and charming throughout. The best part of his performance, which was always missing from Tobey Maguire’s insular nerd and Andrew Garfield’s emo hipster, is that he fizzes with a perfect, excitable, nervous energy. It’s exactly what you would expect from a teenager who is constantly trying to keep his freaking cool superpowers a secret for fear of getting in trouble, while also revelling in them.

Elsewhere, Michael Keaton provides one of the best MCU villains to date by being just a tangible criminal – not a CGI alien or an improbable mastermind, but an opportunist with a grudge. And, as you would hope, Keaton gets a couple of great scenes where he really gets to ham up the nastiness.

One of the film’s greatest strengths is – and I can’t believe this is a point that has to be made about a movie in 2017 – it has such a wonderfully diverse cast. There is no surer sign that this is a superhero film for an entirely new generation than the fact that it has a roster of actors that properly reflects a multicultural society. Better still, these actors aren’t just padding out the call-sheet; they each deliver and contribute to some of the best moments, with particular highlights coming from awe-struck best pal Ned geeking out at Peter’s abilities, and a dry and sardonic friend Michelle imparting withering remarks from a cool distance. 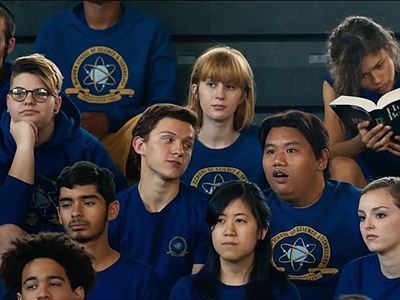 My progressiveness senses are tingling, you guys!


If none of the above seems particular shocking, you’ll be pleased to know that not everything has been telegraphed in the trailers, as the film still has plenty of surprises hidden up its snug, skintight sleeves. Some pleasing fan payoffs help end the film on a high, but best yet, there is a midway rug-pull that reveals a masterful deception in the script. It’s the only time I have ever been in a screening where the audience broke into spontaneous laughter and applause at what basically amounts to just a simple plot development. That the film can pull off a major story coup within the familiar trappings of a Marvel movie actually restores faith in a formula that has seemed staid in recent years.

Overall it amounts to not just one of the best superhero films of all time, but it is easily the best Spider-Man film to date. There will always be affection for the Raimi films, of course. Well, for the first two. But this is the only time anybody can really say that a film has given us an amazing Spider-Man, a spectacular Spider-Man, and yes, the ultimate Spider-Man.

More:  Spider-Man Homecoming  Spider-Man  Marvel  Iron Man  Tom Holland  Robert Downey Jr
Follow us on Twitter @The_Shiznit for more fun features, film reviews and occasional commentary on what the best type of crisps are.
We are using Patreon to cover our hosting fees. So please consider chucking a few digital pennies our way by clicking on this link. Thanks!