Star Wars: The Force Awakens might just be the best film of the last 30 years or so…


…at highlighting exactly how pointless movie reviews can be sometimes.

This film is going to be subject to an assessment and reassessment of its every minute detail for decades to come, so how can one review adequately critique a movie that is regarded with that level of passion? How can it consider all the baggage that comes along with the Star Wars name? How can it address a fanbase that can invoke blind defensiveness or needless vitriol at a moment’s whim?

Whatever happens when the film is released, there will always be both lovers and haters of this new Episode. There will be people who will cry at the sight of their favourite characters back on the big screen again, and there’ll be people who complain that they’re old and boring and their childhood has now been ruined forever. For every person praising the film as a feminist text, there’ll be someone claiming that killing aliens is teaching children to be xenophobic. For some, it will be too reliant on the original films, and to others it won’t be ‘Star Wars-y’ enough. In short, it can't possibly win everyone over. 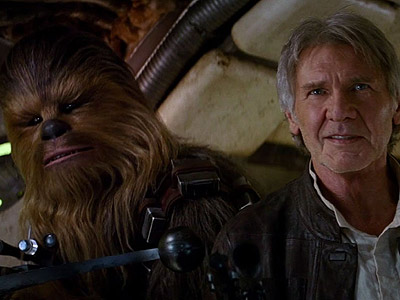 
So let’s just all agree that everyone and their dog will see this film at least twice and tweet their own opinion within minutes of exiting the cinema, ok? What follows is just what I think.

In keeping with the assessment and reassessment inevitability, there are issues and flaws, of course, but on the whole Abrams has delivered the Star Wars film that we, as Star Wars fans, always wanted. The Force Awakens doesn't pander to a new generation of kids, and it doesn't get bogged down in homage and reverence; it makes clear and bold choices about the future of the franchise, and secures it for the next instalments. And that is really what should be most important to fans, even if we don't want to admit it.

While taking its story beat cues from the original first film, The Force Awakens makes clear from the offset that it is going to be Empire-like tonally. Shadows and a dark night sky envelop the opening scene which, one mind-blowingly awesome use of the Force and one witty exchange of dialogue aside, is truly brutal. For those expecting a new A New Hope - a standalone film of slow scene setting and ultimate victory - are in for a shock. This new Episode doesn't cater for those wanting the blanks filled in first; it picks up a new plot thread in the thick of an aftermath we don't know about yet and runs with it at breakneck speed until the credits roll. But that's ok, because the plot it runs with is pure Star Wars at its most adventurous, most epic and most intense. 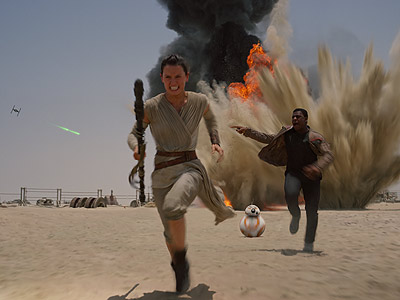 
Based on what worked in the original trilogy, a good Star Wars story needs to have some very fundamental elements: an underdog protagonist who takes on insurmountable odds to be triumphant (something that the prequels sorely missed), the mystique of a Chosen One narrative complete with a sense of destiny, and a clear battle of good versus evil. All of these are present and correct in this new instalment and it gives Star Wars back the scale and wonder that it has been deprived of ever since it was revealed that Vader built Threepio.

And throughout it all, there is balance. There’s just enough old school to provide context for the new school. There is a galaxy full of nods and squee moments, sure, but this is a story of the new characters first and foremost. It is the decision to immediately make way for the younger characters, as well as one major plot development that shakes up the entire Star Wars universe as we know it, that is most likely to divide fans. But, from a storytelling perspective, everything is executed with the saga’s best interests at heart, creating strong character moments, building relationships and selling the impact of certain momentous events.

In terms of the characters, they are mostly all on point. New lead Daisy Ridley seems to take a couple of scenes to warm up to her otherwise relatable character Rey, the scavenger with a missing family taking her first step into a larger world, while John Boyega steals the show as Finn, the fish-out-of-water former stormtrooper feeling his way through the adventure with fake bluster. Adam Driver’s Kylo Ren is a formidable villain – unhinged by conflicted feelings and terrifyingly unpredictable as a result. In any case, he is far more intimidating than his evil cohort, Domhnall Gleeson, who is a little hammy in his Tarkin-esqe role, barking orders with less conviction than Peter Cushing managed 40 years ago. Meanwhile, Oscar Isaac’s Poe Dameron is dashing and down-to-earth – a genius pilot with a hard line in bravado. His lack of screen-time is a shame but it is easy to see how there isn’t much room in one movie for both him and Han Solo. 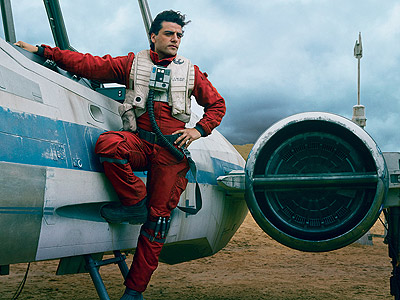 
And Han Solo has to come first, because Harrison Ford is the biggest revelation here. Not only is it the most animated he has been in a film role in decades, there are moments when a familiar glint appears in his eye and he delivers a line that is just so Han Solo. When he and Chewie arrive on the Millennium Falcon and announce they’re “home”, they’re not kidding – Ford is back playing this much-loved character the way he should always be played at this age. And, along with John Boyega, he manages to provide the comic relief in a movie that gives us as much light side as dark to become what is easily the funniest Star Wars film to date.

It should go without saying that action and spectacle are key throughout the movie. From swooping dog fights to fierce lightsaber battles, The Force Awakens delivers on everything that a franchise famed for its blockbuster sequences and special effects should. The reliance on practical effects – bar one jarringly CGI threat halfway through – is gratifying and helps ground the film in a reality far removed from the digital galaxy of Episodes II and III. On the whole, this film perfectly looks and feels like the beloved Star Wars of old, even while it takes us into new and unexplored territory.

But yet, I know full well that my opinion is coloured by my own pure, blind love of the franchise. That the original trilogy had such a powerful impact on me as a kid, I am naturally inclined to get swept up in the moment and be manipulated into cheering and gasping and drop-jawing perfectly on cue. But JJ Abrams knows just what he is doing – he is a mastermind puppet-master pulling every thread of fandom at his disposal to get audiences onside and whooping in delight.

And if you just give in to it. If you just forget for a moment the superfluous flaws, the cynicism on the tip of your tongue, and the impossible expectations that this film has to live up to. If you do all of that and just let the wonderful nostalgic magic of spectacular cinema wash over you, for small fleeting moments, you might be forgiven for indulging in one stupid, delirious fantasy. That Star Wars: The Force Awakens might just be the best film of the last 30 years or so.

More:  Star Wars The Force Awakens  Star Wars  JJ Abrams  Daisy Ridley  John Boyega  Adam Driver  Harrison Ford  Mark Hamill  Carrie Fisher
Follow us on Twitter @The_Shiznit for more fun features, film reviews and occasional commentary on what the best type of crisps are.
We are using Patreon to cover our hosting fees. So please consider chucking a few digital pennies our way by clicking on this link. Thanks!