Starred Up might be the angriest movie ever made. Set inside a British jail as troublesome new arrival Eric Love (Jack O'Connell) joins his lag father Neville (Ben Mendelsohn) on the wing, David Mackenzie's prison drama feels as though it is powered by white hot fury. As the inmates clash, tidal waves of ugly, pointless, misguided anger crash down on one another. The air feels heavy with rage, as if characters breathe in a red mist and can't help acting on it. The inmates of Starred Up are like bombs that could go off at any second, and the movie's fuse constantly threatens to ignite without a moment's notice. Although the director often allows himself to indulge in the violence as his characters do, Mackenzie never loses sight of what's behind the unrest, and why that's way more important than the outbursts themselves.


We see nothing of the outside world here: the universe of Starred Up is in miniature – concrete cells and metal bars, low ceilings and plastic chairs, deep-set windows that don't open. Mackenzie crafts an unwelcoming, unmerciful aesthetic that leaves you in no doubt from the first scene, as Love is inducted into the prison: you're in here with him. It's a hellish, powderkeg environment: Broken Britain in microcosm. Misdirected glances and choice words lead to savage beatings or worse. It's no exaggeration to say that every upsetting event in Starred Up happens because the canteen server manhandles Jack O'Connell's mashed potatoes – and that's not a euphemism. 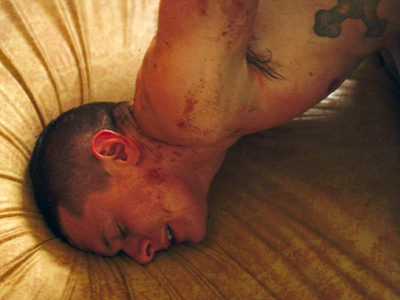 Eric dreamed of chips, or perhaps one day, even crinkle-cut chips.


What saves Starred Up from being Scum Lite is the script by Jonathan Asser, a former prison worker who taught anger management and rehabilitation classes at Pentonville Prison for over a decade. Here, Rupert Friend plays his avatar: a well-educated, Oxford-born carer who tries to tame the raging bulls of the prison with a white flag instead of a red rag. Though it's hard to shake the image of Cartman asking "How do I reach these keeeeeds?" in South Park's spot-on parody of Dangerous Minds et al, Asser's experience gives Starred Up all the authenticity it needs. If the goal was to humanise the inmates rather than categorise them, Asser succeeds, and Friend excels as his mouthpiece.

O'Connell, however, provides the film with its most startling performance, the kind that makes you sit up and take notice: a "Where did he come from?" experience of the kind that kickstarts careers. Eric Love is, on the surface at least, a wrong'un, but O'Connell – working from and adding to Asser's succinct script – gradually peels back layer after layer until you catch glimpses of the man beneath. Encased in a stone tomb and with a head too young to process enough physical and emotional pain to last a lifetime, Eric lashes out like a firework let off indoors. Mendelsohn, meanwhile, adds a dynamite dynamic as Eric's father, although not in the ways you expect: they share a fascinatingly complex relationship that acts as the heart of the film, power constantly shifting between them, emotions barely simmering beneath. 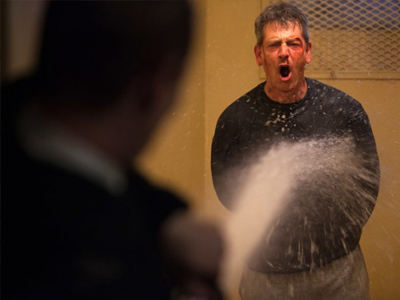 This extra was as pleased to see Mendelsohn as I was.


Starred Up is a movie you're never entirely comfortable with: it doesn't give you a moment to relax. There are brief moments of levity that bloom through the concrete cracks, all of which feel natural and real to the moment, but Starred Up's tone is on a knife edge; the film is capable of exploding into violence off the back of one off-colour joke. The feeling of unease never quite goes away and stays with you some time after the credits roll.

The only thing that doesn't quite ring true is the portrayal of the upper echelons of the nameless prison's staff. Though the story may echo writer Asser's real-life experiences, the heartless prison manager – all pock-marked skin and evil sneers – feels like a bastard too far; the one concession to creative licence that Starred Up deems fit to allow. Perhaps the salve of a storybook villain actually sooths the film's prickly sting of authenticity – on the whole, Starred Up refuses to pigeonhole its characters whatever side of the law they fall upon. It offers no easy answers and takes no sides: the result is one of the most engrossing, exciting and explosive prison films this country has ever produced.

More:  Starred Up  David MacKenzie  Jack OConnell  Ben Mendelsohn  Rupert Friend  Prison
Follow us on Twitter @The_Shiznit for more fun features, film reviews and occasional commentary on what the best type of crisps are.
We are using Patreon to cover our hosting fees. So please consider chucking a few digital pennies our way by clicking on this link. Thanks!