Warning: this is going to be one of those reviews where I basically spend a thousand words completely picking holes in the film, only to give it three stars anyway - feel free to knock off a star if you're not easily impressed by shiny things (I am shallow and a horrible person). It says a lot about Sucker Punch that it can have such hugely obvious flaws and still remain enjoyable for the most part - if it wasn't executed with such panache it would probably qualify as one of the dumbest movies of 2011.


Structure is probably the most fundamental aspect of filmmaking - if you don't have something holding all your characters, scenes and dialogue in some sort of meaningful order, then everything will just fall apart. That's where Sucker Punch utterly fails to score a single point - with the faintest of justifications from director Zack Snyder, it's basically a string of over-the-top fantasy action sequences slapped together with no connection whatsoever. The annoying thing is, they're so bloody good, he almost gets away with it. As a visual artist, Snyder is among the world's best; as a storyteller, he straight up sucks.

Back-story is confined to the opening credits, which is almost entirely slow-motion, obviously. We're introduced to Baby Doll (Emily Browning) as her abusive father locks her in the nuthouse, where the sharp end of a lobotomy waits in five days courtesy of one-scene wonder Jon Hamm. There, she meets fellow patients Blondie (Vanessa Hudgens), Amber (Jamie Chung) and sisters Sweet Pea (Abbie Cornish) and Rocket (Jena Malone), who teach Baby to retreat into increasingly absurd (male) fantasies to escape the grim reality which awaits her. That size-zero narrative is excuse enough for Snyder to drift away into dream sequences that'd dampen a teenage boy's duvet. 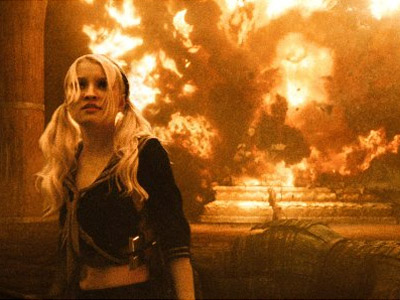 
What follows is the most poorly-scripted, limp excuse for a screenplay I've seen in many a year. With Baby being a dreamer (and she's not the only one), the existence of the mental hospital is almost immediately folded into the far more glamourous reality of a '30s brothel, complete with girls wandering around in basques and tiny pants and push-up bras. Much better! Now, the girls raison d'etre is to 'dance' for the club's owners, and Baby Doll dances much better when she's imagining herself slaying 10 foot-high samurais with machine guns. Mid-fantasy, Scott Glenn pops up to dispense some expository dialogue, informing her that she'll need a key, a knife, a map, some fire and "a mystery item" to escape. Who is he? Why these things? WHO CARES, GIANT SAMURAIS!

To be fair, having seen the trailers and the menagerie of action contained within, it's a big ask to expect all of Sucker Punch's aspects to come together in a coherent whole. Funnily enough, it seems mecha-samurai, steam-powered Nazis, fire-breathing dragons and killer robots don't mesh together all that well. The lack of coherence between fantasies is staggering, and when you're several delusions removed from reality at all times, it's hard to figure out what - if anything - is at stake when Baby and the girls are fighting. Style has substance in an atomic noogie and isn't letting go until its has had its fill of fun.

Snyder shows little interest in the hows or whys, only the wows. It's no secret that he reverse-engineered Sucker Punch from the money shots backwards, but his script puts so little effort in even attempting to link them together it defies belief. I'd call his approach videogame-esque, but that's a slight on videogames - even they have to have a vague reason for lining up battalions of disposable enemies for you to hack and slash.

Frankly, it pays to be like Baby Doll. Try and block out the enormous deficiencies in the script and enjoy Sucker Punch for what it's meant to be - what critics used to call an "action spectacular". If Snyder wasn't so good at this stuff, it'd be a complete dead loss - thankfully, each fantasy is a sumptuous visual feast, complete with superb fight choreography, Snyder's trademark bullet ballet and a healthy appreciation for an audience's understanding of scene geography. The director's slo/fast/slo-mo button gets pushed several times, but compared to the what/when/how/why-the-fuck [delete as applicable] style of shakycam, I know which I prefer.

Sucker Punch is a beautiful movie. Rick Carter's luscious production design combined with Snyder's fetishism of the female form means this is one seriously good-looking film. See it on the biggest screen you can, because every frame is saturated with colour and drips with detail. During the WWII sequence, Snyder has fiery blimps crashing to earth in the background, like it ain't no thang. The crowning achievement of his technical wizardry comes in the final, futuristic fantasy, courtesy of a digitally-stitched tracking shot of Baby Doll and Rocket scything a train full of robots into sparking shards of metal. It's jaw-dropping for its arrogance alone.

But, try as you might, you can't silence that nagging voice in your head. The one that whimpers at the awful, perfunctory dialogue (step forward spare wheels Vanessa Hudgens and Jamie Chung) and the quasi-mysticisms of Scott Glenn's Columbo-esque spirit guide ("Don't write a cheque with your mouth you can't cash with your ass!"); the one that's indignantly yelling at how convenient it is to have a group of young girls empowering themselves while sticking their tits out and sucking their stomachs in. The fact I've not even mentioned the female cast says a lot for how the screenplay treats them. Baby herself is mute for the first 15 minutes - not for stylistic reasons you understand, but simply because Snyder has nothing for her to say. 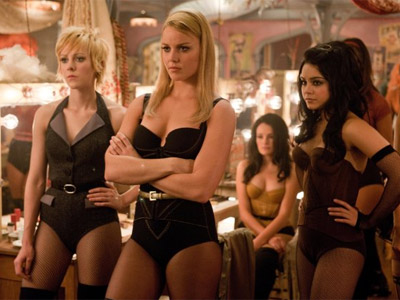 Sure, dollface. Whatever you say.


As the five attractive ladies of Sucker Punch go about their business, dressed in corsets and short skirts, gyrating for the pleasure of their male owners, in between working up a sweat in orgiastic fight scenes in which they wield giant phallic weapons and slaughter various nefarious villains, it's pretty clear whose fantasy we're watching, and it ain't no lady.

More:  Sucker Punch  Zack Snyder  Emily Browning  Abbie Cornish  Jena Malone  Vanessa Hudgens  Jamie Chung  Jon Hamm
Follow us on Twitter @The_Shiznit for more fun features, film reviews and occasional commentary on what the best type of crisps are.
We are using Patreon to cover our hosting fees. So please consider chucking a few digital pennies our way by clicking on this link. Thanks!