So I finally got old. Morning: doctor's appointment for dry skin. Afternoon: phone calls with estate agents and surveyors and mortgage advisors. Evening: still-aching limbs from a football match played 48 hours previously. I startle awake to find myself sat in a Paramount screening room ready to watch the latest iteration of Teenage Mutant Ninja Turtles, a phenomenon I was probably too old to enjoy guilt-free the first time round a quarter of a century ago. "Let's see those hands in the air!" says a company spokesperson, urging attendees to don the giant green foam hands provided for a photo opportunity. I am secretly glad I didn't pick any up on the way in. Because I am old as fuck.


It is useless attempting any serious discourse about this franchise, because a) it's called 'Teenage Mutant Ninja Turtles', and b) it exists in that netherzone of cinema where no one could possibly be misled as to the quality of its content, therefore effectively making it bulletproof. That said, I remember the 1990 Teenage Mutant Ninja Turtles, and I can confidently say that this new version - with all its CG bells and mo-cap whistles - is significantly less likeable. Just like there's a lot to be said for practical special effects versus CG, the old 'man in suit' costumes have a considerable charm that motion-capture cannot hope to match. Bear in mind these were costumes so shitty that even the most low-resolution HD televisions enable the viewers to see the actors inside them every time they opened their mouths.

Without wanting to be one of 'those guys' who complains about aesthetic changes to a new version of a beloved childhood property (I wonder what all the 'Flames on Optimus Prime' guys are complaining about now?), these new Turtles are fucking hideous to observe - painful, even. They appear to have been modelled on those insipid 'hoo-ra' Gears Of War soldier lunkheads; all biceps and traps and pecs and deltoids. The original Turtles looked like crazy characters; these guys look like grotesque freaks. Even in a world of genetically-modified amphibians and mutant talking rats, I had a hard time believing these Turtles were teenagers - maybe if they bunked out of school to hit the gym. Maybe this is what teenagers look like these days. To reiterate: I am hopelessly out of step with the youth of today.

Fuck, my back doesn't half still hurt. 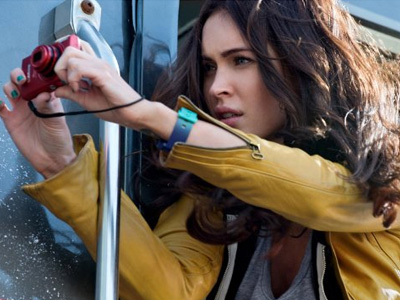 "This bright yellow leather jacket is the perfect attire for my undercover activities!"


As an ageing misanthrope who has to brace himself a week in advance to experience joy, naturally all I could do was spot holes in the film - aimed at kids around 25 years younger than me, remember - and pick apart the plot. It was so easy. Megan Fox plays reporter April O'Neil, who's desperate for a big story, which is lucky, because literally every time she leaves her office, she wanders obliviously into a newsworthy situation. The movie is set in New York City, yet the film's high point is a chaotic freefall chase scene down the side of a snowy mountain, which is apparently just minutes away. I look around to see if the kids at the screening have noticed this geographical blunder. They are staring slack-jawed at the screen, giant green hands shovelling popcorn into their idiot faces. Jesus.

To their credit, Megan Fox and Will Arnett (cameraman Vern, boasting no more dimensions than he had when he was a cartoon) are not terrible per se, but they struggle desperately to make a rote script sound even halfway adequate. Arnett has built his career on elevating duff material to something approximating funny, but he's got nothing but cringey sexual banter to work with, while Fox looks exasperated throughout, like she's slowly realised that this is producer Michael Bay's punishment for her calling him Hitler.

By the time one of the characters yells excitedly "Let's take a bite out of the Big Apple!" I start to wonder how much my house might have increased in value in the time it takes me to watch this film.

There are basic rules of cinema here that are totally ignored. Unless I fell asleep (which is quite probable, if I'm being brutally honest), one of the main antagonists just disappears from the film completely with no explanation as to his fate. Not for the first time in a Michael Bay movie, characters fall from the roof of a skyscraper and land without so much as a shin splint. There are literally scenes that feel like they were included by mistake - alternate takes using largely the same material (April tells her newsroom about the Turtles, no one believes her; April tells her boss, Whoopi Goldberg, about the Turtles, she doesn't believe her, repeat ad infinitum). Villain Shredder is basically a Swiss Army Knife with arms and legs. My skin starts to itch. 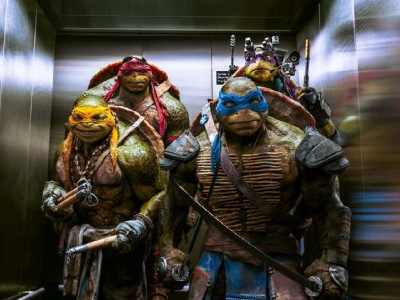 Security camera footage from the crime scene. Do you know them? Have you seen them?


Call me old-fashioned, but I would have liked for the whole film to be a bit more 'California surf dude', as I'm sure the Turtles of 1990 would appreciate. Instead, it's ultra-serious. Splinter is an asshole. Raphael looks like a gang-banger. Bay cast Johnny Knoxville as Leonardo but doesn't have him deliver a single joke. There is one scene involving pizza which felt like it was in the true spirit of the original - that is to say, cheesy, arf arf - but otherwise it's delivered with the gravitas and faux-importance of a Christopher Nolan movie. It's as if no one involved in production thought, 'Maybe we don't have to write a scene where the Turtles imply they might find and rape April?'

I am not the target audience for this version of Teenage Mutant Ninja Turtles. I am quite literally listening to Hall & Oates as I write this. I might as well be reviewing a glass of water or the colour blue for all the impact these words will have. Look... I stayed awake. I paid enough attention to nit-pick. I cared enough to compare it to the original. So clearly it did something right. The mo-cap is well done. It's colourful. It is entertaining enough to watch through until completion, even if there is a scene near the end where the Turtles turn up in their own customised Turtle van which has rocket launchers on it for some reason. The only thing wrong with this film is that there was a 101-year-old man watching it sheepishly from the back row.

Goddamn, it aged me. I felt like my Dad trying to comprehend a Tamagotchi. I exited the screening, stepping around a group of hyperventilating 10-year-olds, trampling on a sea of discarded green foam hands, and began dreaming of a hot bath. Cowabunga indeed.

More:  Teenage Mutant Ninja Turtles  Michael Bay  Jonathan Liebesman  Megan Fox  Will Arnett  Johnny Knoxville  William Fichtner
Follow us on Twitter @The_Shiznit for more fun features, film reviews and occasional commentary on what the best type of crisps are.
We are using Patreon to cover our hosting fees. So please consider chucking a few digital pennies our way by clicking on this link. Thanks!