3D movies are a bit like the T-1000: you can knock them down, but they will keep getting back up. Killing time until the Avatar sequels come out, James Cameron spent six months post-converting his 1991 classic to 3D, at the precise moment that major TV manufacturers announced they’re not going to make any more 3D TVs. You don’t need me to tell you that Terminator 2: Judgment Day is as close to perfect an action movie can get, so the question is: why bother with a rerelease? Fortunately the answer is simple: because it looks fricking awesome.


Cameron’s spectacle remains as sharp as the T-1000’s silver pointy finger and is just as penetrating to the eye. The opening post-apocalyptic sequence of a grinning exoskeleton crushing a human skull underfoot as lasers shoot out of the screen is super sexy, and Sarah Connor’s nuclear nightmares now blast carnage right into your face.

Even without the 3D conversion, Cameron’s use of depth of field is laudable but here it’s dazzling, as if he almost knew that one day technology would be able to catch up with his vision. Every texture and detail looks richer and deeper, the 4K restoration giving the screen such a seductive sheen you’ll want to lick it to see if it tastes as good as it looks. Except y’know, don’t.

In a remarkable act of restraint though, Cameron actually rations the use of 3D throughout to heighten its impact, meaning the end result is much more than the 'looking-in-a-box' experience recent 3D duffers have made audiences accustomed to. 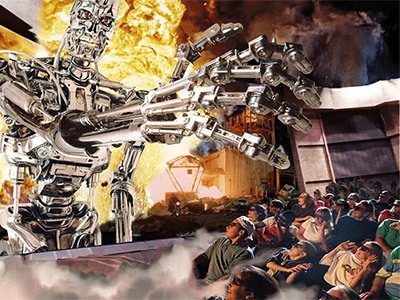 Actual photo of the cinema screen taken with my phone.


With this first T-quel, Cameron and writer William Wisher Jr managed to overcome the difficult 'second album' syndrome by pivoting and making Arnie’s perfect killing machine the sequel’s hero. Likewise, Linda Hamilton’s transformation of Sarah Connor into a formidable freedom-fighter from scared victim is remarkable, justifying her place as one of the most iconic movie characters of all time. See also Robert Patrick and his piercing blue eyes.

But even if Cameron and his mimetic polyalloy machines can momentarily raise interest in three-dimensional technology, can it do the same to revive the flagging Terminator franchise?

Incredibly, 26 years after its release, T2 stills feels fresh not only technologically but also thematically: threat of nuclear war, military weaponry, extreme ideology and the overwhelming sense that we’re living on borrowed time. "It’s in your nature to destroy yourselves," the T-800 tells John Connor, but while the subsequent sequels may feel like the franchise is slowly being lowered into a vat of molten steel, it might just find salvation in James Cameron. Despite what Ali says.

More:  Terminator 2  T2  James Cameron  Arnold Schwarzenegger
Follow us on Twitter @The_Shiznit for more fun features, film reviews and occasional commentary on what the best type of crisps are.
We are using Patreon to cover our hosting fees. So please consider chucking a few digital pennies our way by clicking on this link. Thanks!