Terminator Genisys represents everything that is wrong with modern movies. Absolutely everything. It is a hopelessly contrived revisit to a once famous franchise, long since dragged through the mud and reanimated - for the third time - in the hopes that it can repeat past tricks. It is a reboot that fails to perform the basic function of a reboot - to start afresh with a blank canvas - instead preferring to muddy the waters of an already terminally confusing timeline. Worst of all, it is chronically boring and manages to make a movie about a robot uprising seem about as exciting as the launch of Tidal. In short, it is the worst film of the year by far; a catastrophically bad moviegoing experience that not only manages to insult fans of the first (and only) two decent Terminator movies but manages to botch the franchise to such an extent you wonder if even the 12-year-olds it's aimed at will be impressed by its static action and needlessly convoluted plot.


I don't ask much of a movie and am willing to overlook the odd plot kink or logic gap as long as I'm satisfied that I know where it's headed and the filmmaker knows too. Terminator Genisys, however, fails at a fundamental level: of being able to explain what its characters are doing, what they want and where they are going. The first 20 minutes of Terminator Genisys are competent enough, perhaps even enticing enough to make you want to stay awake for the duration, but the endless, apologetic exposition continues well into the first hour; it's a directionless movie that somehow manages to retroactively ruin the James Cameron movies by mangling their plot components and making the timelines, and therefore the franchise, MORE confusing at a time where it desperately needs to be simplified. Occasionally a character will listen to a temporal lecture before exclaiming "Of course!", at which point you are totally entitled to laugh. 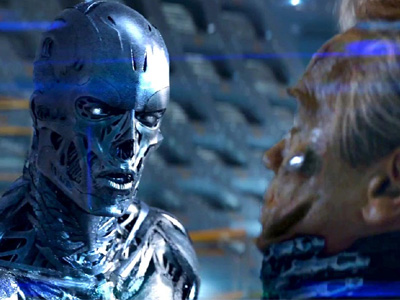 "Remind me why we're fighting?"


This is not me exaggerating for effect. After around half an hour of time-hopping, I threw my hands up and gave in - the script seems like it purposefully obfuscates proceedings with unnecessary kinks to the successful formula, folding the Terminator timeline back in on itself until it resembles a shit paperclip. It desperately wants to be its own beast but only manages to push the reset button in its final minutes; up until that point, it adheres to the familiar franchise story beats and logic, finding itself completely hamstrung between old and new - a shambolic, lurching shadow of a once proud series that should hang its head in shame. Terminator Genisys is literally a movie that devotes more time to explaining how characters source their trousers than it does explaining their goals.

Even outside of the franchise's famously knotted timeline, there are story fumbles that can only be attributed to utter ineptitude. Once we hit 2017, we're introduced to the concept of Genisys, which is the trojan horse through which Skynet takes over the world, except it's never really explained what Genisys is, other than a sort of cloud-based connectivity enabler - yes, the kind of service that is actually available today. It's basically Bluetooth but it's treated like the Second Coming for reasons that are never made apparent. But, y'know, don't worry about it - it's only in the title of the fucking movie. Remember how futuristic Terminator 2 felt back in 1992? Terminator Genisys already feels dated; even the CGI looks less impressive.

There are problems here that are rotten to the core: basic, fundamental flaws that run through the movie like cancer. So Skynet have smuggled themselves into every home in America, but they can't speed up their own launch why? Cyberdyne are behind Genisys, a cloud-based app, but also a time machine for some reason? You have characters who remember memories from timelines that technically never existed; flashbacks from lives that haven't yet been lived. The T-800 character known as 'Pops' (note the filmmakers can't even bring themselves to call him that in the movie's credits) is protecting Sarah Connor, but who sent him, and thus, why do we care? It's tempting to try and unravel the whole sorry mess to pin-point exactly why it makes no sense, but it's energy better spent forgetting the whole sorry endeavour. Terminator Genisys is one of those movies that retroactively makes you feel angrier the more you think about it. 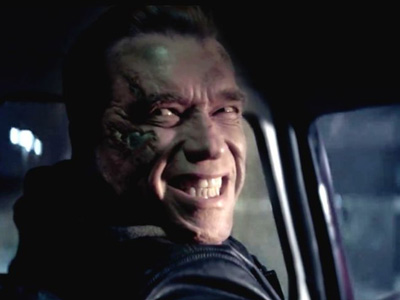 
Even the elements that initially impress soon turn sour. The concept of a young adult Sarah Connor, pitched somewhere between the latent killer of The Terminator and the total badass of Terminator 2, is a good one, and Emilia Clarke makes for an interesting take on the character... until she's forced to flash her bra and become a lust object for another male character in some cringeworthy, clunky romantic scenes that are about as subtle as an erection in a church. JK Simmons makes for a fun addition as a supporting character with an extra layer of knowledge, but he vanishes and adds nothing. Byung-hun Lee is a promising addition to the Terminator canon who arrives on the scene with no explanation and disappears just as quickly.

By the movie's strangled, convoluted end, it's abundantly clear that Terminator Genisys is a product of analogue thinking applied to digital problems. It's a movie that has vastly superior futuristic technology fought off with pistol fire; a film in which bonking a super-intelligent robot on the head with a big metal pipe somehow constitutes a solution. The main new Terminator in this movie - more advanced than the liquid metal T-1000 and even the T-X - is susceptible to magnets. Fucking magnets. That's the kind of boneheaded plotting you're dealing with here. Magnets.

Here are the headlines. The Terminator franchise now has more bad movies than good ones. James Cameron, who wholeheartedly endorsed this addition to the franchise, now cannot be trusted. The Terminators have now spent the accumulated run-time of five movies failing to defeat an inferior model; after suffering heavy defeats at every step, they look less like unstoppable killing machines and more like a cack-handed nano-joke - like shit Daleks with fake teeth. You never get any sense that the robots are in danger of winning, nor do you understand what they'd do if they ever did. They are a spent force. The Terminator franchise absolutely did not stop ever until it was dead, and it has left an ugly corpse in an open casket.

More:  Terminator Genisys  Terminator  Arnold Schwarzenegger  Jason Clarke  Emilia Clarke  Jai Courtney
Follow us on Twitter @The_Shiznit for more fun features, film reviews and occasional commentary on what the best type of crisps are.
We are using Patreon to cover our hosting fees. So please consider chucking a few digital pennies our way by clicking on this link. Thanks!