Adding itself to the long list of films that are about the least dynamic occupations known to man - alongside The Postman and The Constant Gardener - The Accountant belies the real nature of the job by having a musclebound, autistic Ben Affleck punch and shoot people in his spare time. We all know, however, that accountants are only good for trawling through an overly complicated mess of information to try to simplify everything and make sense of it all. Which is, coincidentally, exactly the kind of accountant that this film really needed.


For a movie that feels like it should just be about a new kind of autistic Bourne - calculator by day, stone-cold killer by night - it really tries to pack in a lot of extra plot. At the centre is a thriller in which Affleck's ridiculously-aliased Christian Wolff is hired by John Lithgow's robotics company to check their finances and then uncovers a massive multi-million dollar discrepancy. This then somehow leads to hitmen, murder and a major conspiracy.

It also leads to friendship with kindred finances worker Anna Kendrick, who becomes an unseemly love interest for one scene only. Meanwhile, J.K. Simmons is a Treasury agent on the verge of retirement who instructs newbie agent Cynthia Addai-Robinson to find out the identity of this strange accountant-looking guy who keeps appearing at major crime get-togethers. Meanwhile meanwhile, flashbacks reveal Wolff's difficult childhood as a seriously autistic boy with Rain Man levels of social impairment, whose militant father then makes sure he is trained as an awesome fighter to help fend off bullies. Meanwhile meanwhile meanwhile, later flashbacks reveal Wolff's time in prison learning black market deals from cell-mate Jeffrey Tambor. And there are at least two twists, only one of which really matters. All of this, and Wolff still maintains his day job helping everyday folk get the most out of their income by bending IRS rules. Just in case we're in any doubt that he's a good guy. 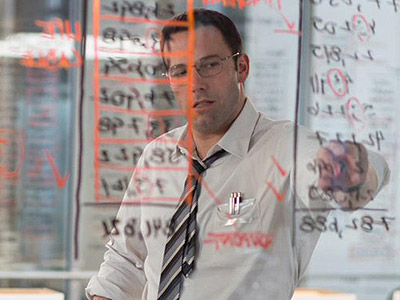 "I've cracked it! When you go round the other side, the numbers are the right way round!"


It seems that this is just too many lines for director Gavin O'Connor's Excel spreadsheet to cope with and his refusal to merge anything together into a cohesive formula means that some of these characters go missing for huge stretches of time. Upon receiving her mission, Cynthia Addai-Robinson promptly disappears from the screen for approximately half an hour and when she returns she hasn't made any progress (luckily, she has some audio footage and one of those computers with a special 'Isolate Vocal Track' button to help her catch up). Later on, Anna Kendrick's numbers nerd – the only character with whom Wolff forms any kind of connection – gets an unceremonious farewell 20 minutes from the end because there just isn't room for her in the film's anti-climactic finale.

Ben Affleck's Wolff, however, is the biggest contradiction of all. Confused and inexpressive for the most part, but calculated and precise where needed, he apparently never sleeps, spending half his time behind a high-powered rifle and the other half writing calculations on a glass screen in permanent marker. He is completely emotionless, apart from a few scenes where he relaxes and smiles at the most half-hearted of jokes or panic-fights in rage. His mind is so mathematical, he can only fully relate to numbers… but he’s also a lover of fine art. And despite his only training regime apparently consisting of bashing his own shins with a truncheon in what looks to be some kind of endurance ritual, he still has the muscle tone of, well, Zack Snyder’s Batman. 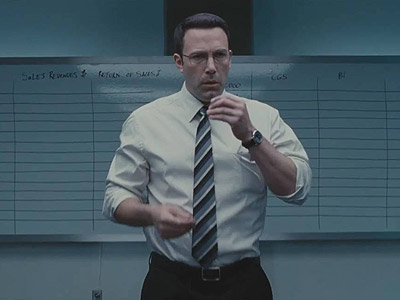 He also blows on his fingers a lot as a quick, low-maintenance, convenient way to remind you he's autistic.


Look, I know I’m on dodgy ground arguing that the behaviour of an autistic character is inconsistent, but it’s the portrayal that seems wrong, betraying our expectations just as we feel like we have our hero pegged. And, let’s be honest, inconsistency may be an understandable consequence of suffering autism, but it’s certainly not a trait you look for in an accountant.

Somewhere in all of this mess, there’s a taut action-thriller, that’s 90 minutes long and introduces an intriguing, dynamic new hero who could be explored in later follow-ups, in the same vein as John Wick or the aforementioned Bourne. The film certainly seems to have one eye on franchise potential, as if exhausting Wolff’s entire back story in one film is a smart way to leave things open for a sequel. If that was ever the plan, there’s just so much going on this film, it is now going to require an entire audit conducted with a marker pen on a glass screen to figure it out.

More:  The Accountant  Gavin OConnor  Ben Affleck  Anna Kendrick  JK Simmons  Jon Bernthal  John Lithgow
Follow us on Twitter @The_Shiznit for more fun features, film reviews and occasional commentary on what the best type of crisps are.
We are using Patreon to cover our hosting fees. So please consider chucking a few digital pennies our way by clicking on this link. Thanks!