The Adventures Of Tintin: The Secret Of The Unicorn

Despite a directorial career that spans – holy shit, 40 years? – The Adventures Of Tintin: The Secret Of The Unicorn is Steven Spielberg's first animated film. Techniques have come and gone over the years, barriers have been broken, box-office records and preconceptions shattered alike, but only now has Spielberg decided the medium is ready for him – and he's picked his moment well. For all of the good work done by Robert Zemeckis, Peter Jackson and James Cameron, it is Spielberg who has justified the existence of motion-capture technology: The Adventures Of Tintin is a relentlessly thrilling, rip-roaring yarn that's as close as anyone has ever come to bringing a comic-book to life.


Adapting the beloved works of Belgian artist Hergé – in particular, The Secret Of The Unicorn and The Crab With The Golden Claws – Spielberg's Tintin has a sense of adventure that's been absent from the director's live-action work of late. It's a hat, whip and map with a red line on it away from being a lost Young Indiana Jones Chronicle, and makes Kingdom Of The Crystal Skull seem sluggish and artificial in comparison. Tintin is the best sidekick Indy never had – hopefully, the inevitable success of this series will completely negate the need for Indiana Jones 5. 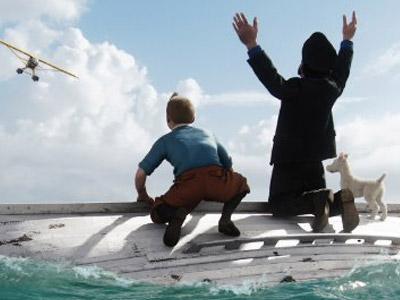 
You suspect Spielberg is a huge fan of both the endlessly rich source material and the powerful yet playful technology at his fingertips. The opening scene gives your eyes a chance to readjust to the 3D and the stylised, motion-captured characters – caricatures with cartoonish faces living in a photo-real world. It takes a while to process fully – Tintin, for example, is a spookily lifelike La Roux lookalike, while other characters have comically large noses and beady eyes – but that deathly hollow you saw in the eyes of The Polar Express and A Christmas Carol is gone. Only comic relief simpletons Thompson and Thomson cause queasiness: with oversized heads on normal bodies, they bungle around like two law-enfeebling Frank Sidebottoms. Tintin doesn't quite sail over the uncanny valley with grace, then, but it's certainly clambering up the other side.

To reiterate: this is a very, very, very, very, very good-looking movie. The locations are sumptuously painted, spanning from dingy docks to sparkling desert oases – you only wish the pace would slow down so you could soak in the atmosphere once in a while. The Adventures Of Tintin is a chase movie first and foremost, careening through a succession of better-than-the-last action sequences across land, water and air. The centrepiece – a glittering pursuit through a Moroccan medina – is a single three-minute take that'll reduce even the most cynical of viewers to a slack-jawed gawper. It's STUNNING: bustling, vibrant, alive – it simply couldn't have been filmed for real.

This is Spielberg enjoying himself, and it shows. From the jaunty opening credits, reminiscent of Catch Me If You Can's Saul Bass-inspired intro, Spielberg shows he's just as comfortable directing animation as he is live-action. The blocking, framing, panning and camera work is all top-notch as expected, but this new medium offers the director the chance to add dozens of neat little touches – nods, winks, clever transitions. Flashback scenes, which tend to be either a crutch or a stoop, are weaved seamlessly into the story. The entire movie is one long, expertly composed ode to movement and fluidity. It's arguably Spielberg's most out-and-out fun movie since Jurassic Park. 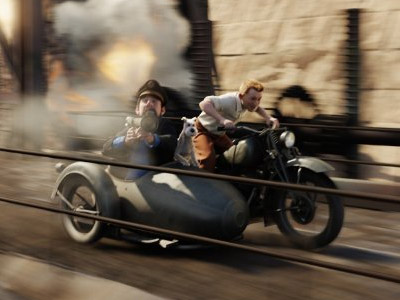 
Not all of the credit can be dumped on The Berg's doorstep. Steven Moffat, Edgar Wright and Joe Cornish did a great job on Tintin's screenplay, crafting a light-hearted, pacey romp that's big on mystery and doesn't skimp on humour. Jamie Bell's quiffy hero is enthusiastic and inquisitive without being irritating, but Andy Serkis' Captain Haddock is the comedic yang to Tintin's sober yin – a sort of proto-Jack Sparrow, fuelled by booze and fisticuffs, he's a Scot through and through (Serkis even wraps his talented tonsils around the accent). Daniel Craig's sneering villain Sakharine is the one let-down – a cookie-cutter bad guy whose archetype hasn't been altered in the 70 years since the book was written.

Indeed, if you must grumble, it feels a touch long (even at 107 minutes) and the 3D is practically invisible. There's a total lack of female characters – apart from corpulent opera singer Bianca Castafiore, who looks like a David Lynch creation – and the slapstick of Thompson and Thomson is aimed more at the less discerning younger viewer. But should you mark a film down for appealing to everyone? Of course not: The Adventures Of Tintin is Steven Spielberg's most accessible and downright enjoyable movie in years: here's hoping Peter Jackson can uncover another gem in Red Rackham's Treasure.

More:  The Adventures Of Tintin  Tintin  Steven Spielberg  Jamie Bell  Andy Serkis  Simon Pegg  Nick Frost  Daniel Craig  Toby Jones
Follow us on Twitter @The_Shiznit for more fun features, film reviews and occasional commentary on what the best type of crisps are.
We are using Patreon to cover our hosting fees. So please consider chucking a few digital pennies our way by clicking on this link. Thanks!