The Beatles: Eight Days A Week – The Touring Years

What a Beatles documentary has never quite captured is their cultural significance. You can't, not really: it is too tightly bound up in everything we hold as self-evident about popular culture and our relationship with celebrity. Ron Howard, having had the sense to focus his film on the touring years up until 1966 rather than compress The Beatles Anthology into two hours, allows us a window into just how mental those four years were, and gets closer to the truth of it than anyone else has managed.


Fifty years ago last month the Beatles left the stage at Candlestick Park, San Francisco, and decided that was their last concert. They'd had enough: the inaudible gigs played through stadium tannoys, drowned out by screams; the death threats; the crazies trying to get into their hotel rooms, leaving them hanging around in the bathroom as the only available sanctuary. They'd spent four years touring the world and all they'd seen of it was hotel porcelain.

History is more enamoured with the astonishing period of creativity that now followed once they hunkered down at Abbey Road and made the studio their new instrument, but even when touring relentlessly they'd innovated on a similar scale. Writing in hotel rooms and vans, they'd already made it their business to make giant leaps and reinvent themselves with each new single (about every three months): from the harmonica-led railroad skiffle of Love Me Do, through Please Please Me's Orbison on speed, towards the opening Rickenbacker clang of A Hard Day's Night and out the other side into the thunderous, urgent Ticket to Ride, the contemporary equivalent of One Direction releasing a Slipknot cover. By this point the oldest of them was Ringo, at twenty-fucking-four. 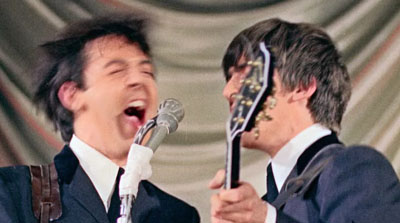 When I was 24 I had a pretty decent job as an admin assistant, which is more or less the same thing.


The band always complained later that they couldn't hear themselves over the screaming, so how they managed to develop on this scale is little short of miraculous. But they remained an incredibly tight live act, relying on muscle memory learned in Hamburg and the Cavern, and there's a wealth of restored footage in Howard's film that shows this in glorious detail. Their Manchester ABC Cinema date in November 1963 features a stomp through I Saw Her Standing There that quickens the pulse and could only have been delivered by a group tuned instinctively to one another's habits. Ringo says, in typically deflating style: "I'd be watching John's arse, Paul's arse, to see where we were in the song."

You marvel at how they dealt with it. Influenced almost as much by comedy as they were by rock 'n' roll, their early interviews were unfailingly good-humoured and often hilarious, part of their route to public acceptance that's often forgotten. "Well John, here is the American public. Forty million American viewers," says one interviewer, pointing Lennon towards the cameraman. "It just looks like one man to me," he deadpans, unfazed. Harrison spends one interview flicking cigarette ash into Lennon's hair and chuckling to himself. Someone asks McCartney about his influence on culture, and he insists: "It's not culture. It's just a good laugh." Even Paul's commentary on the footage of John explaining away his "bigger than Jesus" comments lends it a new tone when he notes just how hard Lennon was working not to make a joke.

Where Eight Days a Week really nails it, where other documentaries have presented it as a curio to be sniggered at, is in getting right inside the screaming crowds and what that meant. Early 1960s teenagers, the first generation to have ready access to disposable income, and to be actually referred to as teenagers in recognition of their new demographic status, lived on the cusp of something. Talking back to your parents was still a big deal but you saw for the first time a world beyond your own, through films and music, that suggested there was a space in which you could cut loose. Girls were written off as fit only for motherhood or the typing pool, without even the opportunity to let your hair down for a few years before marrying the first boy you'd kissed at school. You can track Sally Draper's journey into young adulthood through Mad Men and get a sense of this.

Then the Beatles came along. Now here was a safe space in which you could scream, cry, let it all out, and share the experience with your friends. ("They used us as an excuse to go mad, the world did," George Harrison said in The Beatles Anthology, adding ruefully: "And then blamed it all on us.") Within this was the communal explosion of female sexual expression that has characterised all boy-band fandom since, and a significant step along the way to the women's liberation movement. They went nuts – horny, tear-sodden and unable to cope – because they wanted to, and no man could prevent it. 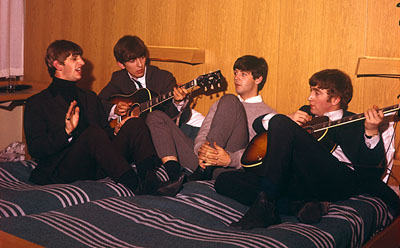 
Where other documentaries have been edited to make you laugh at and dismiss this, Howard wants you right there, in the crowd, and is smart enough to show you brilliant, successful women like Sigourney Weaver (found as a 14-year-old in the 1964 Hollywood Bowl footage, wonderfully) and Whoopi Goldberg describing what it was like to be there. These weren't mooning teenagers; they were young women, looking around for an identity the world denied them, and gleefully finding it. The accompanying restored Shea Stadium gig, shown in full (half an hour!) on premiere night and hopefully to be included on the Blu-ray, has a delightful array of stories in the crowd: the two girls wearing the same green polkadot dress; a father smoking a cigarette in bemusement but enjoying himself more than he'd probably admit; the girl chaperoning her younger sister, trying in vain to calm her down.

It was their innovation that caught up with them, in the end. The cracks started to show on stage when their Rubber Soul-era songs proved difficult to reproduce, as we see when they struggle gamely through Nowhere Man's complex harmonies at the Budokan in Japan. (Watch the same gig's Paperback Writer from the Anthology to see just how impossible the on-stage task now was.) Revolver came out three weeks before their Candlestick Park swansong and they never performed any of its songs in concert. They retreated into the studio, playing live only once more, in 1969 on the rooftop at their office in Savile Row, then split up, having changed the world forever, none of them yet 30 years old.

As we near the 50-year mark since they bowed out, there is a rush to document as much of this as possible while participants and eyewitnesses are still alive to interview. Leading Beatle historian Mark Lewisohn is dedicating the next ten years to writing the definitive three-volume biography, volume one of which is 900 pages long and ends at the release of their first single. So what could've been a pointless rehash of a well-known story on Ron Howard's part is instead a timely, important documentary, packed with unfamiliar footage and using a refreshingly new approach, just as concerned with recording a remarkable cultural flashpoint as a musical revolution.

More:  Ron Howard  The Beatles Eight Days A Week The Touring Years  The Beatles  John Lennon  Paul McCartney  George Harrison  Ringo Starr  Sigourney Weaver  Whoopi Goldberg
Follow us on Twitter @The_Shiznit for more fun features, film reviews and occasional commentary on what the best type of crisps are.
We are using Patreon to cover our hosting fees. So please consider chucking a few digital pennies our way by clicking on this link. Thanks!