The Birth Of A Nation

Can you separate the art from the artist? Is it fair that a film with high hopes of awards potential is now being overlooked because of behind-the-scenes controversy? And should we let a 1999 rape charge brought against filmmaker and star Nate Parker affect how we view his depiction of rape in this film? One thing's for sure, film reviewers everywhere are grateful for being handed an easy opening paragraph before never mentioning the ethical dilemma again for the rest of the review because it's all a bit (*sharp intake of breath*)


The truth is, the only reason this film deserves to not be recognised come awards season is that it just doesn't quite deliver on its own promise. Maybe it suffers from the recent memory of the far more powerful 12 Years A Slave, but this true life tale of Nat Turner, a slave who led a rebellion against the terrible white-folk slave-owners in Virginia in 1831, just doesn't have the impact that the story deserves.

And yet, all the ingredients are present. It's a tale of extraordinary circumstances, of unthinkable atrocity, of endurance, of love, of humanity. It just doesn't quite explore any of these themes particularly well. 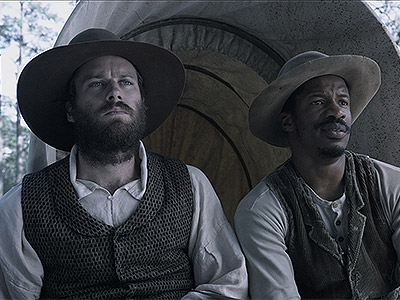 And yet it's facial hair game is off the charts.


Established right away is that Turner, as a child, is taught to read, which is unheard of among his fellow slaves, although any opportunity for dramatic irony in comparing his gifted education to the general ignorance and fake civility among the slave-owners gets lost in the telling. Then, as an adult literate slave, he is coerced into the position of preacher to help keep other unruly slaves in check, and yet any question of faith in the face of such adversity goes largely unexplored. Finally, after one unspeakable act too many, Turner leads an uprising in a bid for freedom for himself and his fellow slaves, resulting in a brutal and bloody finale. And it is this story - a harrowing existence leading to righteous vengeance - that Parker throws all his efforts into exploring.

And portraying. Because, in casting himself as his own lead actor, Parker not only makes it clear that this is a passion project for him, but also delivers a dedicated performance worthy of such devotion. For better or worse, the trauma that Turner experiences could be likened to that in The Passion Of The Christ, with his stoic, well-mannered, good and god-fearing ways standing as a stark contrast to the horrific acts to which he bears witness and, ultimately, then endures himself. And throughout it all, Parker handles these emotive scenes very well, with an inner terror giving way to fierce resolve. 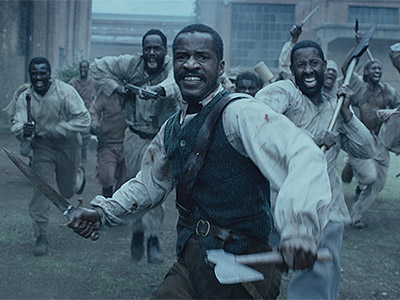 And then, for bloodlust fans, something far more exciting.


Elsewhere Armie Hammer adds layers of inner conflict and confusion in his role as Turner's owner, while other supporting actors such as Jackie Earle Haley simply bring their top racist 'A' game to make up the majority cast of disgustingly evil slave owners that help to sell the horrendous situation explored here.

Of course, overall, this makes the film seem very one-sided, and bear with me while I try to navigate through the pitfalls of this particularly tricky argument: is it really the case that every white person in Virginia at this time was a despicable, murderous racist as is depicted here? Does it even matter, when the nuances are far less significant than the overall message? Or does the very fact that people may leave this film questioning the historical accuracy of this literal black-and-white depiction suggest that this film has failed in an attempt to convince of its own true life story?

It's a similar problem that I explored badly in my Suffragette review last year and just as the case was then, it's safer for me to simply suggest that something hasn't quite worked for me in this film and leave it at that. Trying to make a valid argument for anything to the contrary in the face of such a crucial real-life event would all be a bit (*sharp intake of breath*)

More:  Nate Parker  Armie Hammer  Penelope Ann Miller  Jackie Earle Haley
Follow us on Twitter @The_Shiznit for more fun features, film reviews and occasional commentary on what the best type of crisps are.
We are using Patreon to cover our hosting fees. So please consider chucking a few digital pennies our way by clicking on this link. Thanks!